Summer 2017 Food Studio tested a new concept and invited Pecha Kucha for exploring and foraging by the Akerselva river, and making a community dinner at Losæter.

We gather by the majestic, fallen willow by the river. Normally the resting place for ducks, and also other free birds of the city, drinking their morning beer by the tree. But now they have gathered a little further down, and we are all served bread pudding by Cecilie from Food Studio. Food ethics is a main theme in her work nowadays. The bread pudding is leftover dry bread from the Food Studio office space, transformed into a juicy, tasty appetizer with the help of eggs from her urban chickens. Accompanied by a warm blackberry lemonade it is the perfect welcome on a grey afternoon.

The river is the bloodstream of the city. For thousands of years it has transported the debris from the vegetation down to the sea, provided the landscape with nutrients and water, and our ancestors with food. She even had river mussels with pearls living in her. During the industrialisation, factories popped up by the river, used her streams for energy and she became the main dumping stream for the city. Grey, stinky and dead. The last years she has been restored and trout and salmon are spawning in her again. However, some years ago there was an accidental dumping of several thousand litres of chlorine up the river, and all fish and crayfish died. The populations are now growing again thanks to intensive restoration work, and reminds us of how vulnerable the river life is in such an urban area.

The guests got a treasure map earlier today, and had to solve a riddle. They are sent off treasure hunting. Rumours say they met some sort of peacock character. He calls himself a pirate. River pirate? He had a basket hanging over the river. The peacock pirate captain says he ate a salmon coming from the river just a couple of weeks before. But no one was aloud to take pictures, so we will never know if it is a tale, or really true.

The day before our walk the vegetation by the river was cut down by the municipality. No grazers roam here anymore, so humans and machines do the job… Nevertheless, we found enough weeds to make a decent salad bowl. Stinging nettle, the most nutritious vegetable you can find in the north, ground elder is everywhere. It was introduced by the monks as a medicinal plant, now dreaded by garden owners for its extremely efficient root system. Nevertheless, full of vitamin C, and the young, tasty shoots come again and again throughout summer if we cut it. So we become the grazers by the river, and the plants respond by stimulating more growth. The dead nettle looks just like the stinging one, but only superficially. It mimics the stinging nettle, pretend that it will hurt us, but doesn’t have stinging cells at all, only tasty white flowers. We walk pass the chickweed, the most abundant weed on the planet. Perfect in salads, here it is just to close to the ground and all the dogs that walk by. But we pick yarrow and shepherd´s purse.

We see someone with a strange bike and a big black dog. The figure and the dog look a little scary, are they one of the colourful bird-crews inhabiting the river? At a closer look, it is the night gardener, ready with spruce shoot drinks and music. We put our weed basket in his Christiania transport bike, and keep on further down the river. She flows into a tunnel, no more vegetation, only concrete, we do a little alternative foraging by passing a 3 star restaurant, and popping in to collect their compost. Instead of compost, we get a whole bag of St. George mushrooms, and a promise that they will come visit the urban farm Losæter soon.

Losæter. The first part of the name is the second part of the city’s name. Lo. And a seter is the mountain farm… (-…-) An organic, growing heart between the oldest and the newest part of the city. It started as an art project ten years ago. With a flatbread oven on top of a pile of stones in between cars, machines, cranes and main roads into the city. It has evolved to a whole little farm, with tons of food being produced every year. Ancient grains and vegetables. Hundreds of people are involved, some with their own pallet beds, some through one of the groups that share the CSA. Every Wednesday they have a “dugnad”, anyone can come to work in the garden, and then cook a community dinner from the garden together. A bake house that looks like a sailboat also just opened, and will be open to the public, for bringing their dough and baking their bread. Mira has fired up the flatbread oven, and serve herbal tea from the garden. We pick some more weeds for the salad, weeding and foraging is the same. We mix them with a vinaigrette, and cook our food together. Cecilie brought beer from Bøgedal, and with sourbread and real butter it is served at Maaemo as an own dish, and here as Losæter right now it also tastes delicious. The table is set, we invite everyone at the farm to come down to share the meal with us, and an avocado plant gets the honour to say a table prayer, through the night gardeners MIDI sprout and speakers. Then we eat our meatballs with beef from gras-fed, ancient Norwegian breed, the St. George mushrooms slowly fried in butter over the flatbread oven and bacon for the meat eaters, the weed salad and potato soup. The evening sets as we finish off with a rhubarb chutney from Synnes garden with cream and the traditional “skjørost”. Everyone washes up together, an obvious part of a community dinner. The night is finished with a trip to the floating sauna, we conclude that we are the luckiest people in Oslo right now before we jump in the sea by the opera together.

Thank you to all the contributors that made this magical evening happen!

Thank you to all the food studio crew, to Rørosmeieriet for making the best organic cream and for taking the time to sour the cream before churning it into the best butter we know… Thank you MAAEMO for mushrooms, and for lifting up Nordic food, and putting foraging for wild plants on everyone’s consciousness. Thank you so much to Losæter, the city farmer Andreas, flatbread society, Herbanists, and everyone else for holding this space, this green heart in Oslo for us all. Thank you Åpent bakeri for giving us bread, thank you Sørenga badstue og helårsbadeanstalt for letting us use the coolest sauna in town. Thank you Grøstad gris for providing your pigs with 200 times more space than conventional pigs. Thank you kooperativet (and Solli farm) for providing us with local and organic food every week. Thank you Bergsmyrene farm for the garlic and for keeping it real with biodynamic farming. Thank you Bøgedal for the best organic beer we know of. Thank you urban peacock pirate Martin for all your creativity and colour. Thank you Akerselva for floating as a bloodstream through the city. 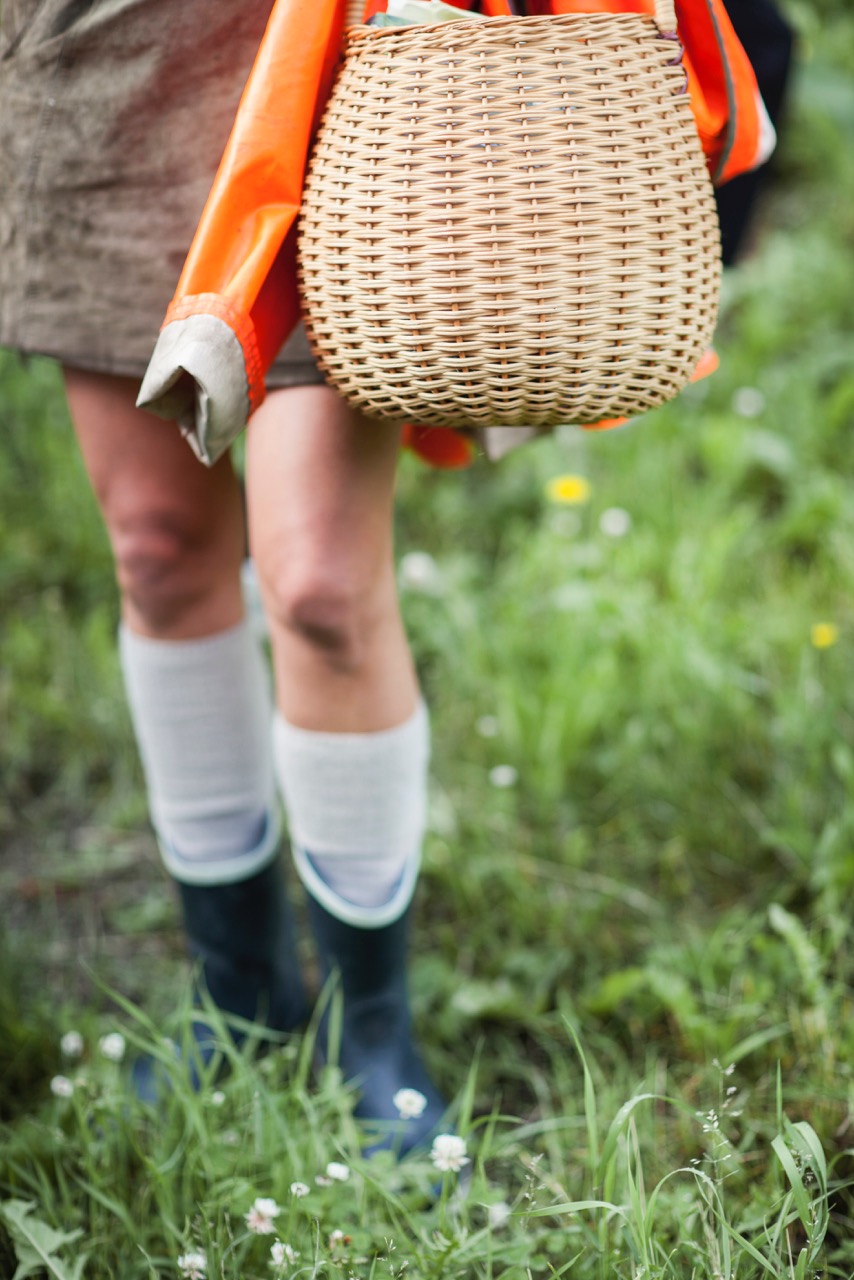 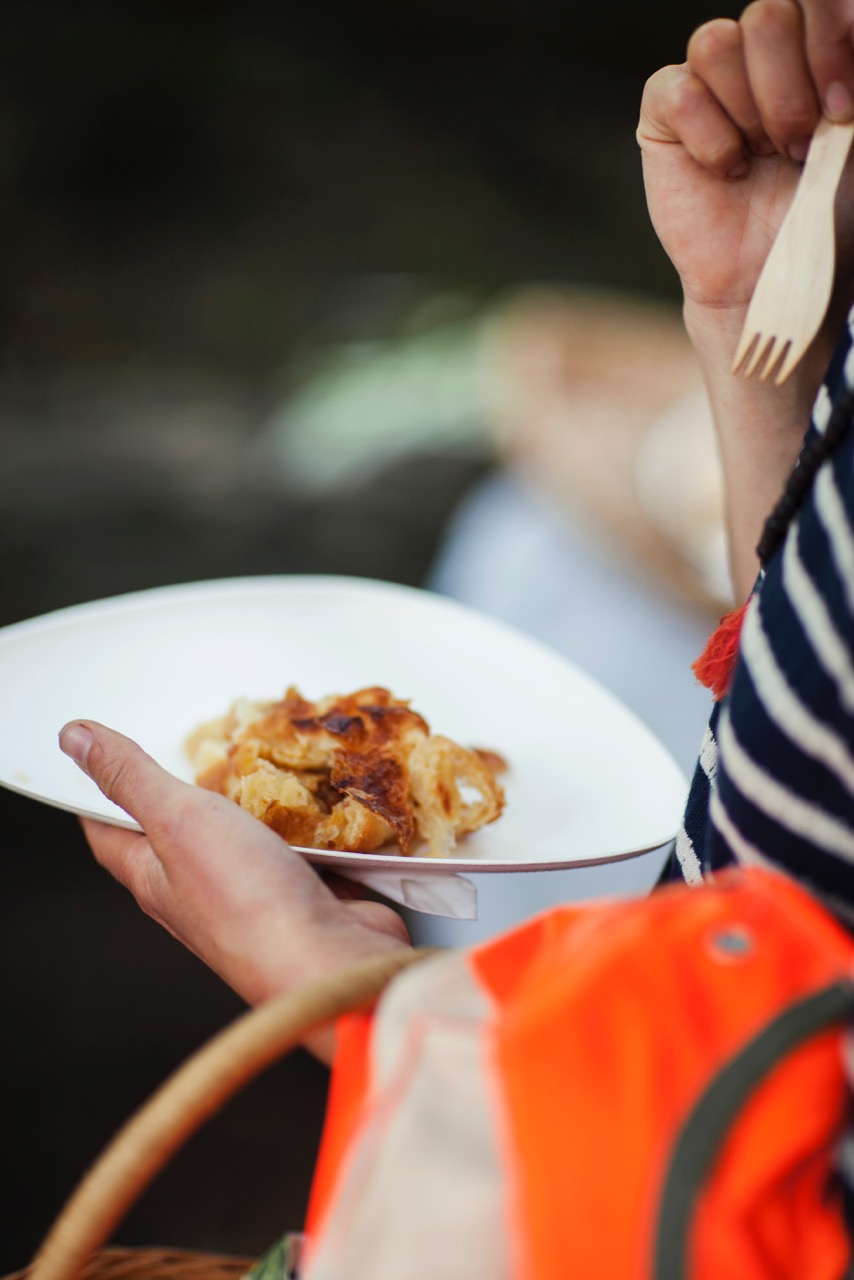 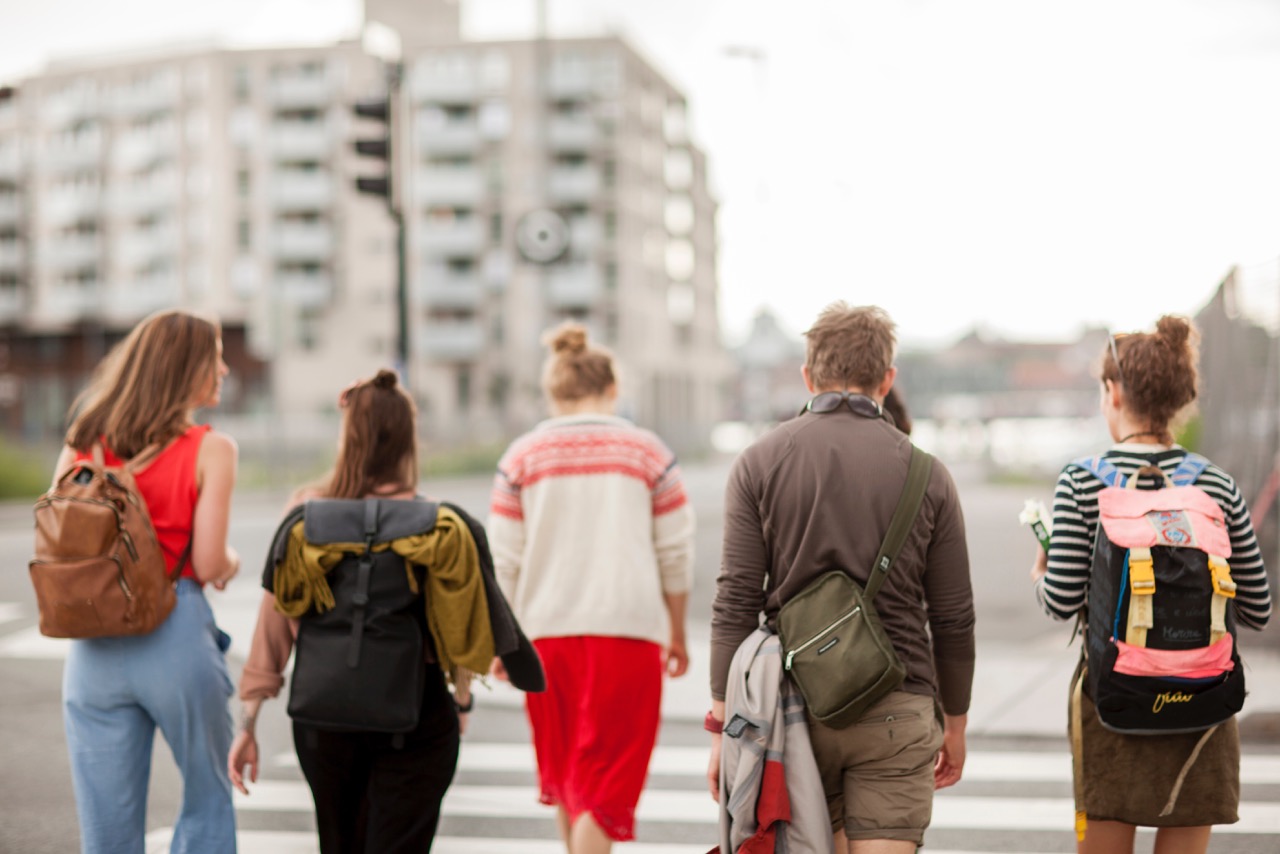 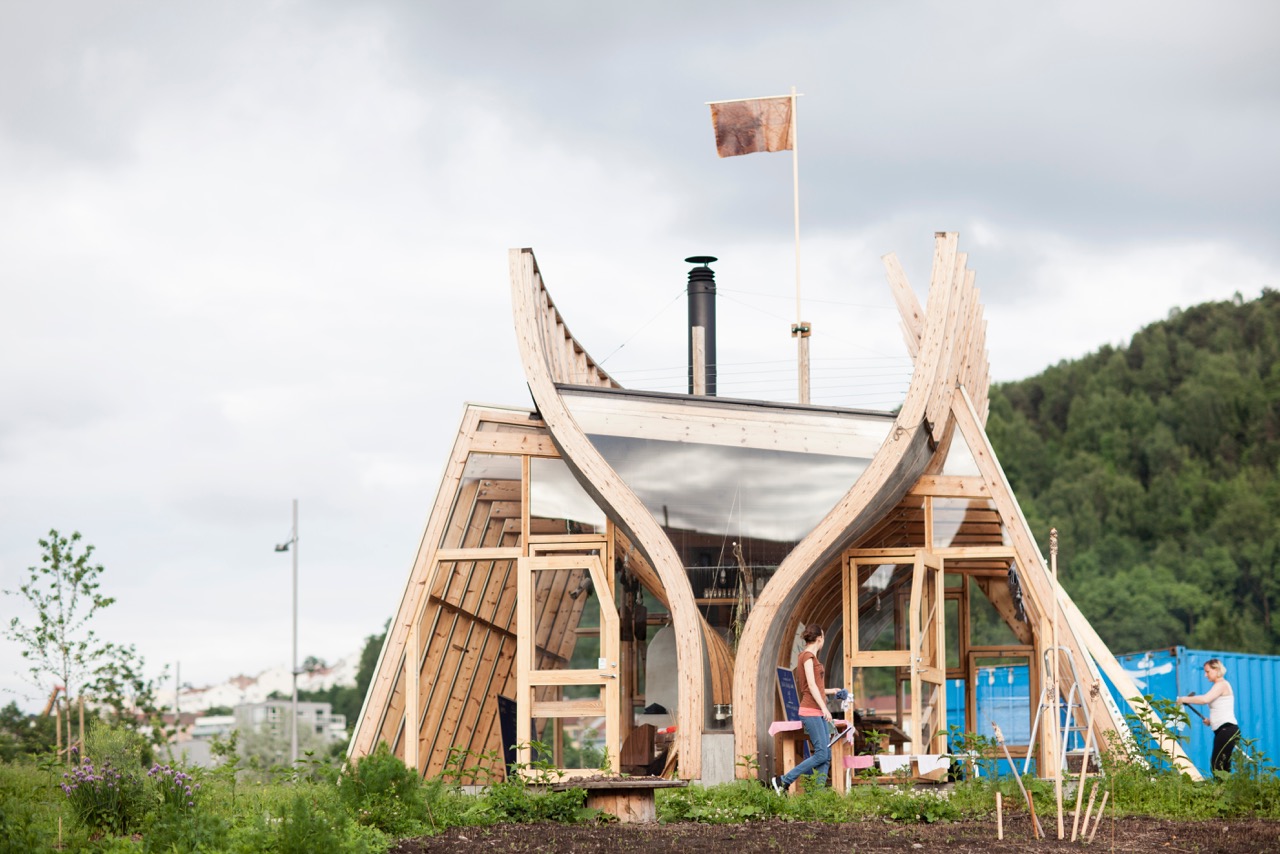 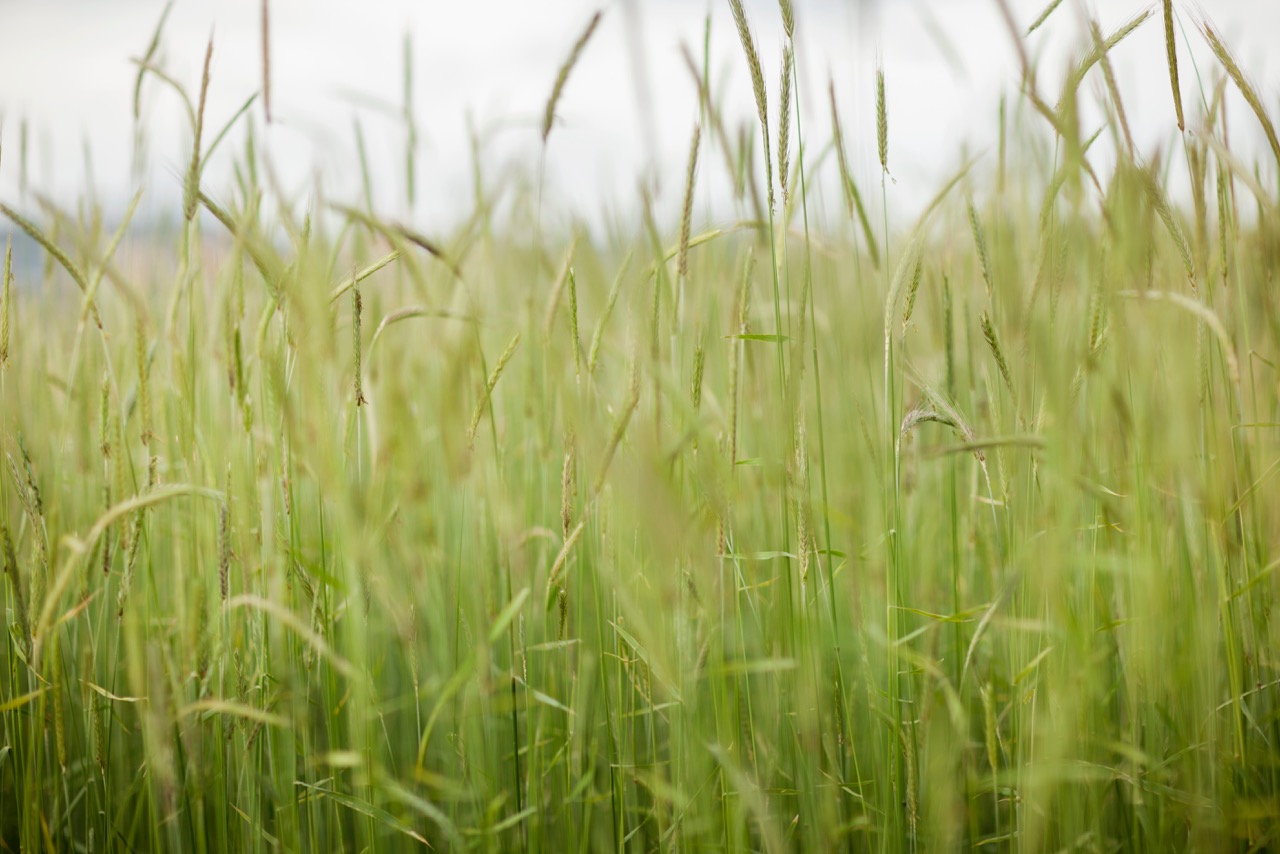 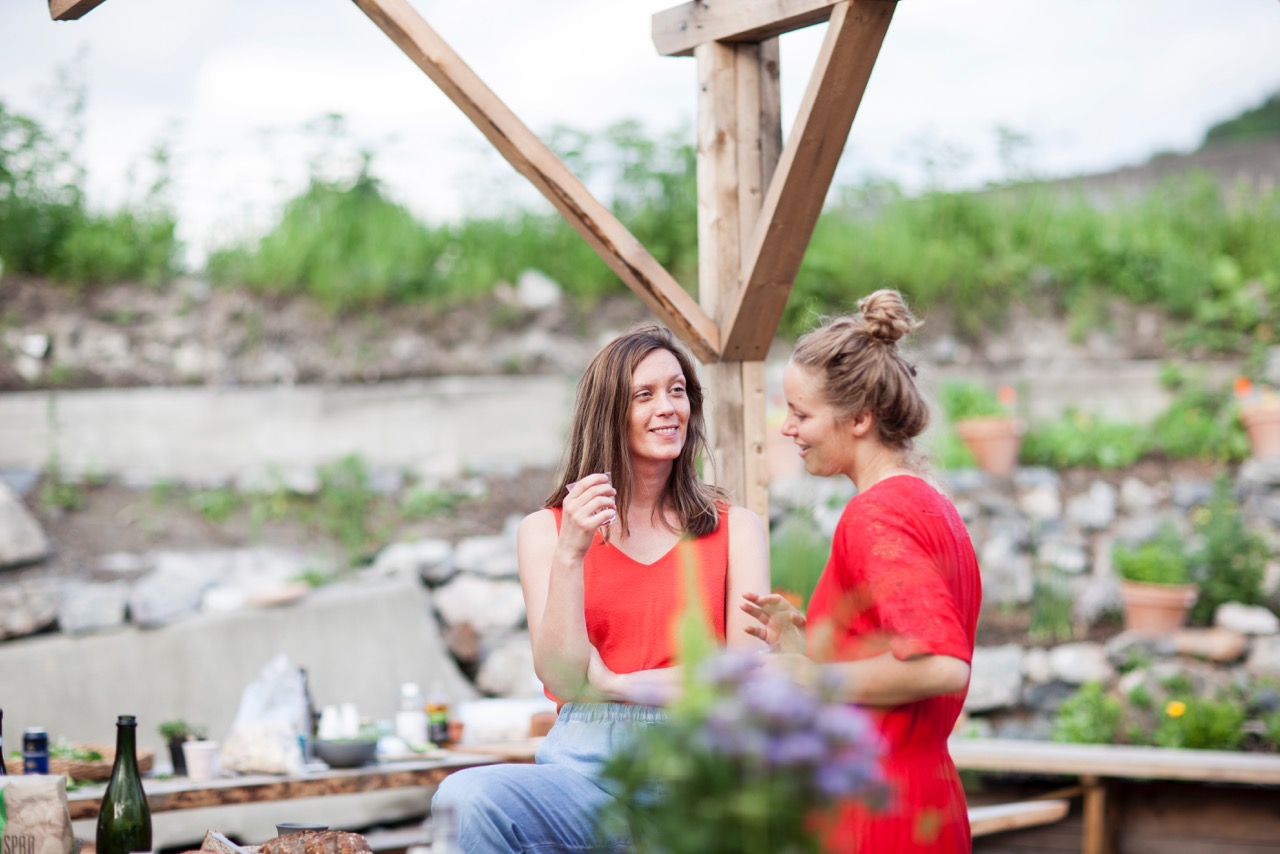 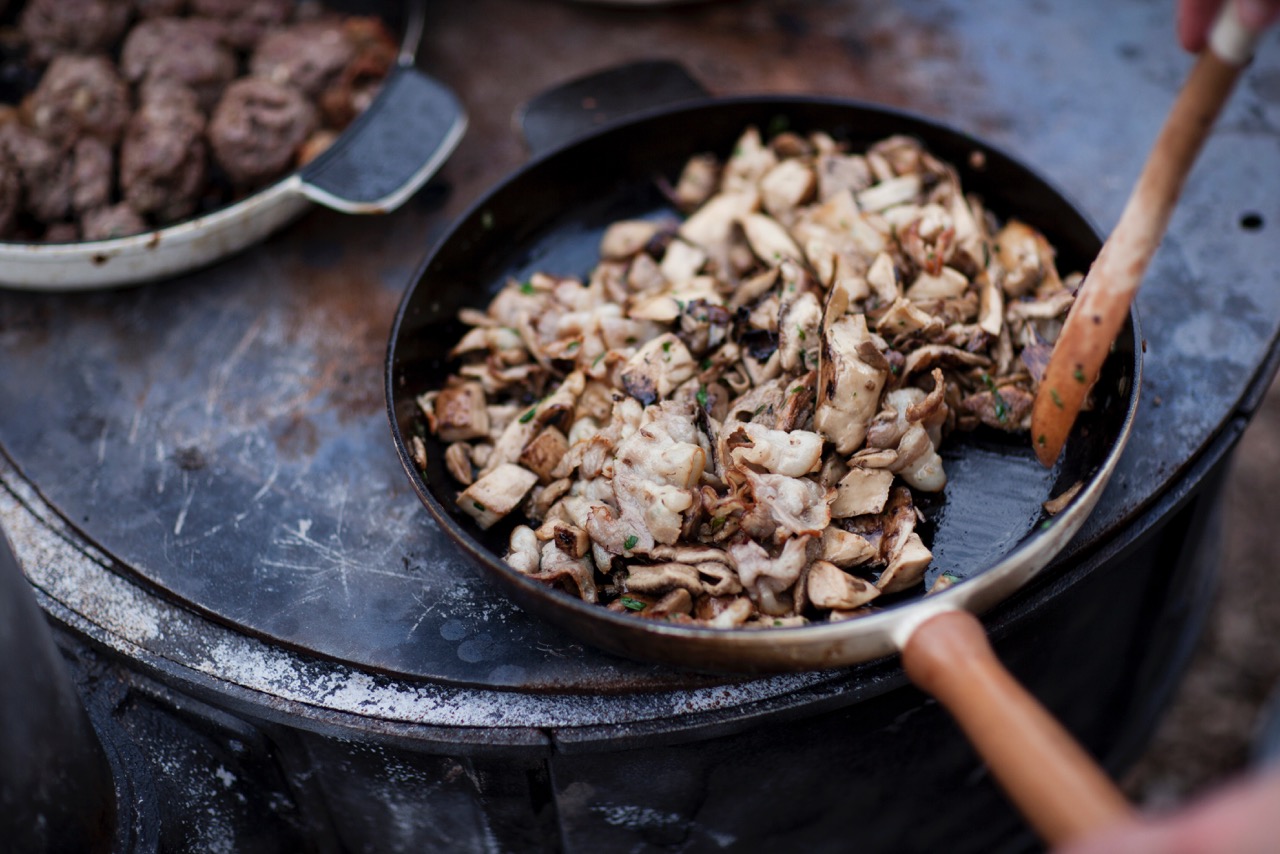 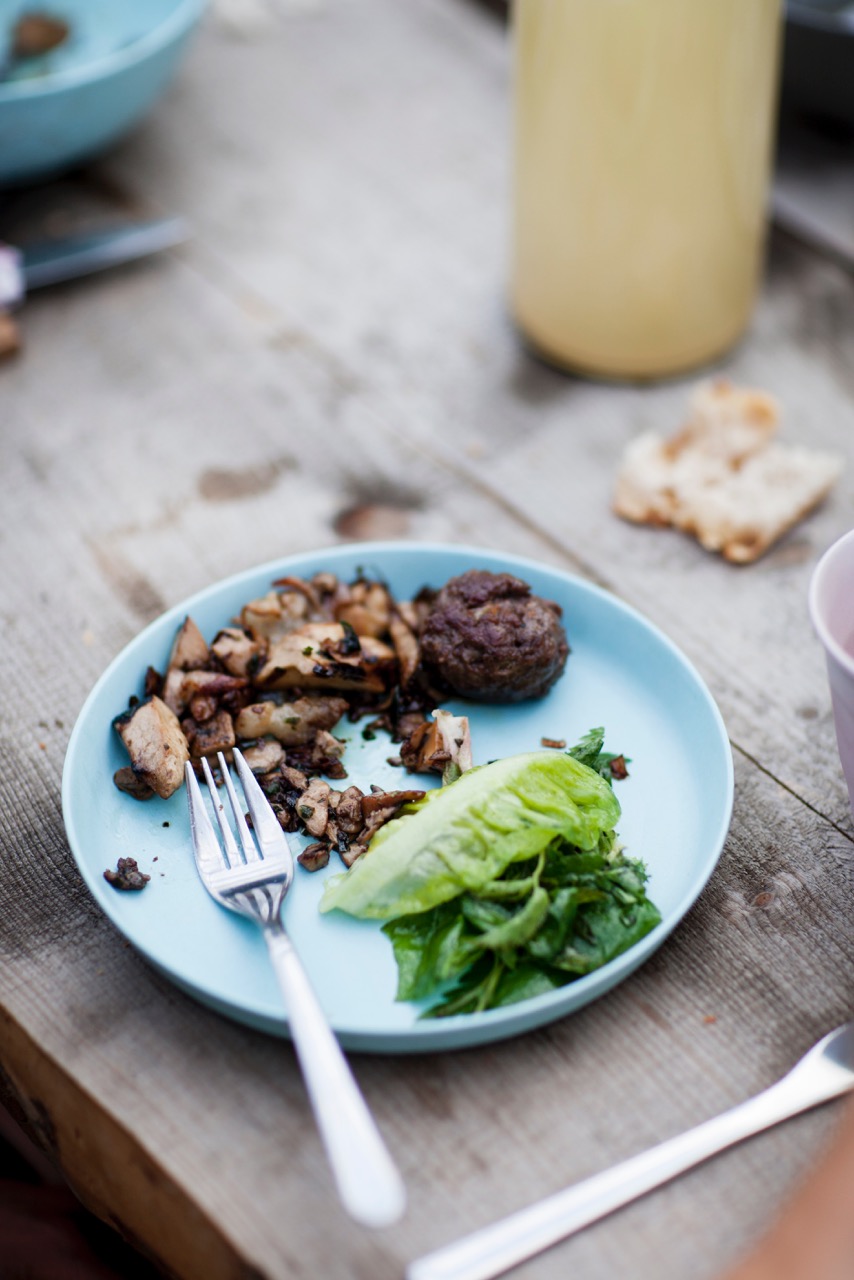 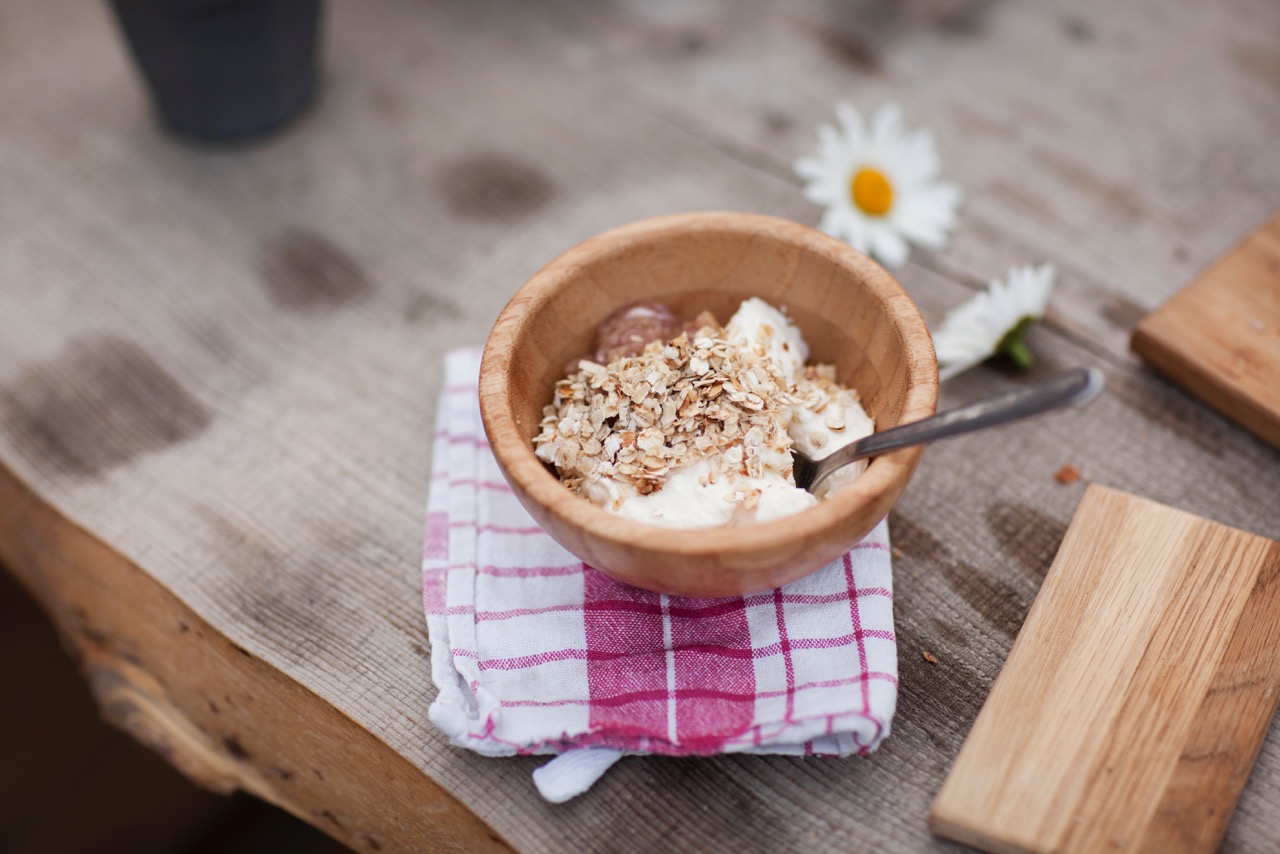 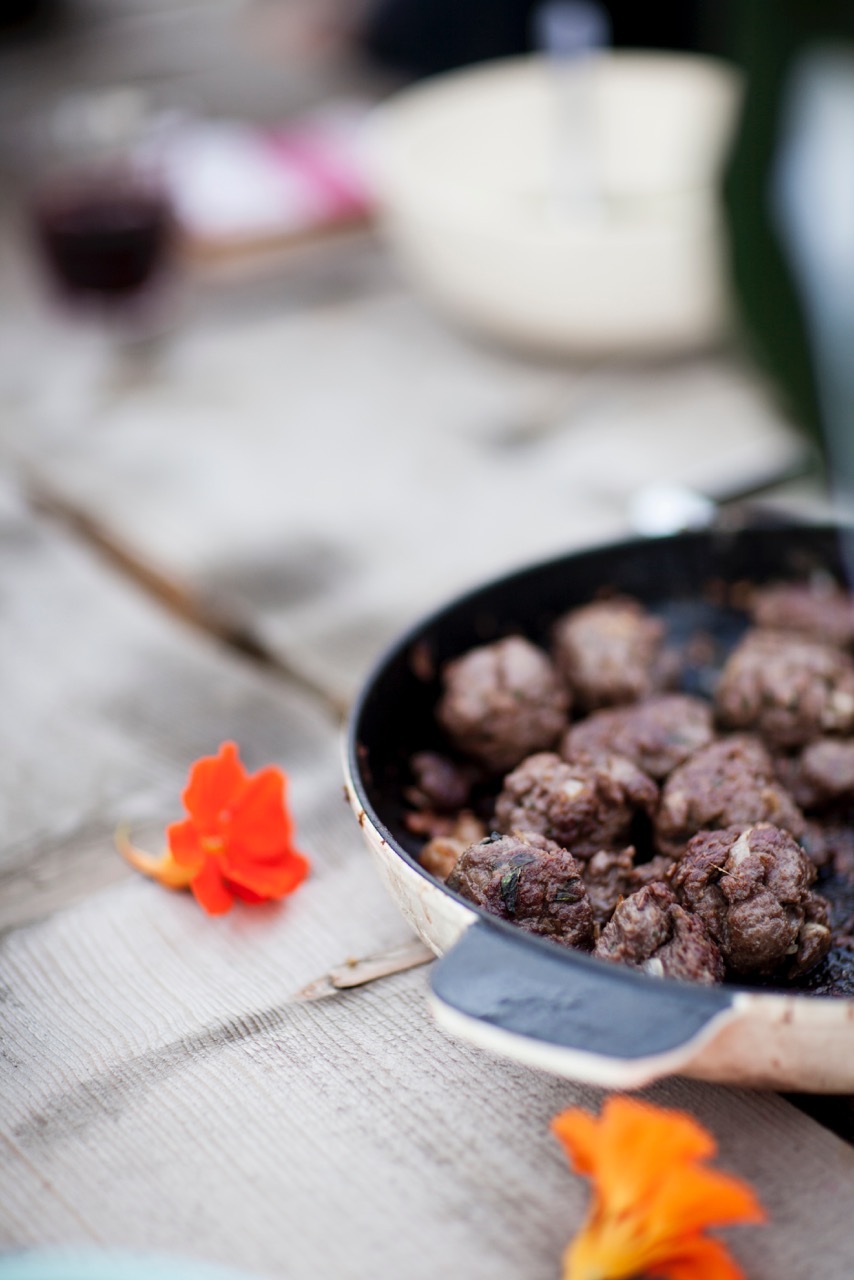