What happens when two former Michelin-starred chefs create a dining experience that values creativity, playfulness, and interaction just as much as the quality of the food? Food Studio went along to Copenhagen to find out.

Early in December, Food Studio headed over to Copenhagen to experience the much talked about “The Social Act” which is the brainchild of Lasse Askov and Bo Lindegaard, chefs and founders of I’m a Kombo.

Bo and Lasse first met at culinary school, where their competitive streaks meant they didn´t really get a long at first. Both went on to work as chefs at Michelin-starred restaurants, but after some years they grew tired of the typical restaurant workday. In 2010 they decided to join forces and created I’m a Kombo to do something different and redefine our perceptions of what eating out is.

I´m a Kombo believes in challenging traditions, changing habits, and surprising the diner in a fun and innovative way. The word ‘kombo’ refers to the combination of tasteful skills and limitless imagination. They respectfully acknowledge the value of pure technical cooking skills, while exploring fundamental act of eating.

We knew from the invitation letter that the concept of the evening would be inspired by music theory, with a focus on the theme of repetition. We also received instructions on where to meet, and what drinks to bring.

Full of expectations for the evening to come we wandered around Kødbyen, looking for the restaurant. Kødbyen is the industrial, old part of Copenhagen, which some years back became home to many quirky and interesting bars and restaurants. We knew the event wouldn’t be held at one of the regular restaurants, but we didn’t quite know what to look for either. A discrete sign displaying an upside down glass and fork – I’m a Kombo’s logo – gave us a hint that we might just be at the right spot. We walked through the passage where the sign was, and soon after found ourselves outside  «the restaurant». On this cold winter’s day in Copenhagen we knew we would be in for something completely different. 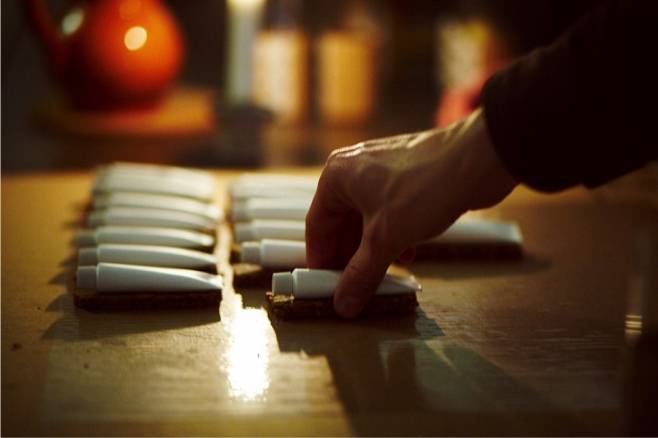 We were warmly welcomed in to a small cozy kitchen and were handed warming cups of hot, fruity apple gløgg. There was also a wooden chopping board filled with small dark rye breads. The rye breads were perfectly lined up with a small white tube on top of each. The tube was filled with smoked cream cheese. Later we realized these rye breads were the first chorus for the evening. While spreading the cheese on the rye bread directly from the tube we couldn’t help feeling like we were eating a typical Danish school lunch.

After Bo and Lasse, the founders of I’m a Kombo, had introduced themselves and told us more about The Social Act and what to expect, we were shown through to the next «work station». Surprisingly we walked through the kitchen and in to another room. We received instructions on how to prepare our next meal. Cured meat was on the table ready to be sliced. The meat had been placed in small spice-filled plastic bags hanging on the wall. After a little shake we were handed some chopsticks to eat the meat with. A fun twist to the standard way of eating cured meat. 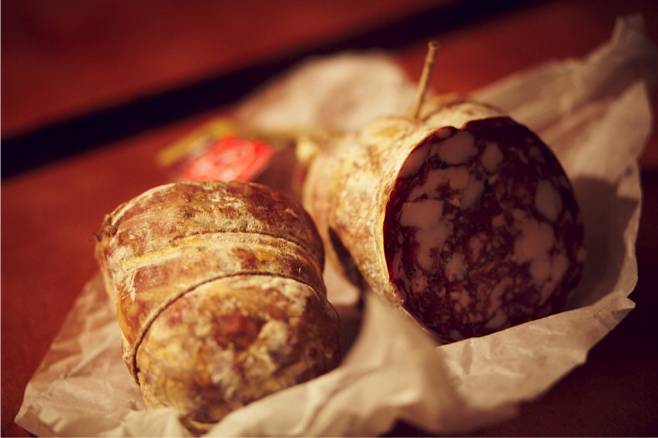 At the next station were glasses filled with crabmeat and seaweed. On the stove there was warm broth to pour over the crab. It became a fresh and tasty soup. In addition, bread was still baking in the oven, ready to be eaten fresh and hot. After the soup we picked up a brown paper bag each with instructions to put them in the microwave. It was popcorn sprinkled with vinegar powder and curry.

As we were «cooking» everyone helped each other and this gave us a chance to socialise and get to know the other guests. We met other foodies, chefs and friends that were there, all sharing a common passion for trying the new and interesting places in the gastronomic powerhouse of a city that Copenhagen has become.

After we had enjoyed a few of the new nibbles and a glass of our sparkling wine that we had brought, we were told to get dressed for the cold and to meet outside. There we followed a mysterious yellow string to our next rendezvous point. Not knowing what was next we curiously followed the line. On the way we were served more rye bread with cream cheese, the second repetition of the chorus for the evening. 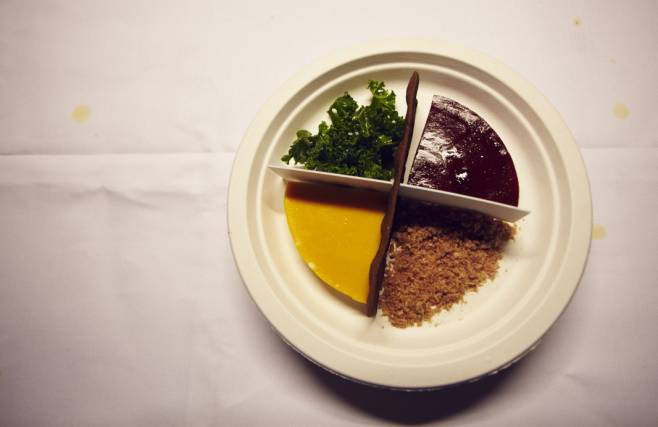 A few hundred meters down in Kødbyen we were greeted by a chef in the doorway of a small little restaurant called Høker Cafeen. He welcomed us in and we soon warmed up again. The place had a bodega feel and the folk music they were playing was gave us the feeling of stepping in to a different era altogether. There were logs of wood filled up against the wall along with baroque paintings.

The group was separated in to three small sections on long family style tables. The first dish was already on the table when we arrived. This was a plate with four different sections, separated with straight lined paper. In each section were bright dishes of yellow, red, brown and green, all with seemingly different textures. By now the buzz of conversations was filling the air, and people were clearly engaged and inspired by the food. Before this wonderful and surprising evening ended, we were served small rye breads with chocolate; a bit like a traditional Scandinavian «kveldsmat” – the final chorus of the evening.

There is no doubt that The Social Act is like an open playground for Bo and Lasse, who seem to have a child-like curiosity about colours, textures and tastes, and who love to keep experimenting, testing and discovering. For us curious foodies, it’s a place to learn, interact, be surprised, inspired and to eat a delicious and satisfying meal. 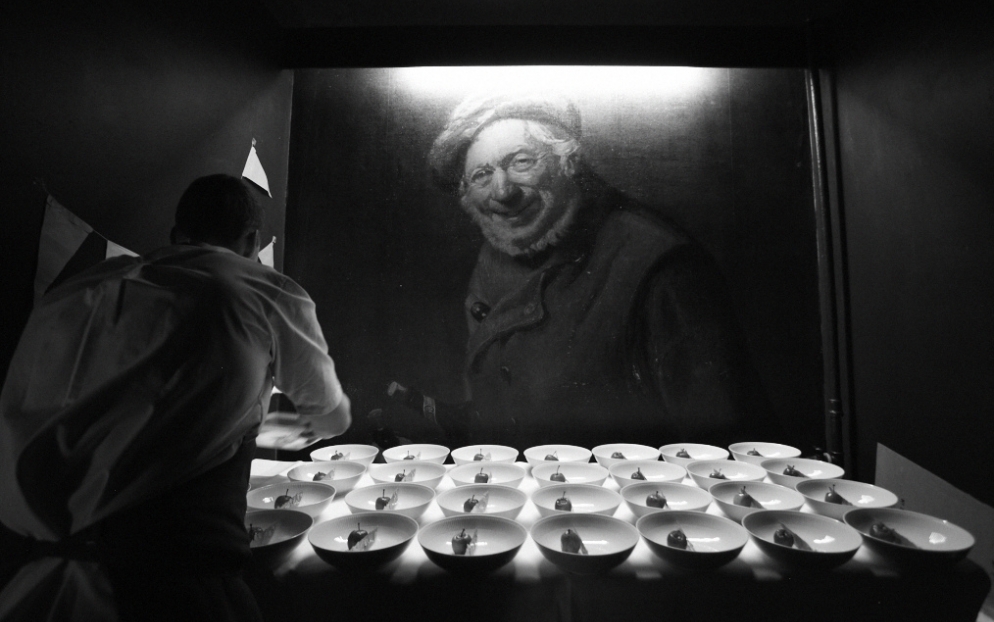 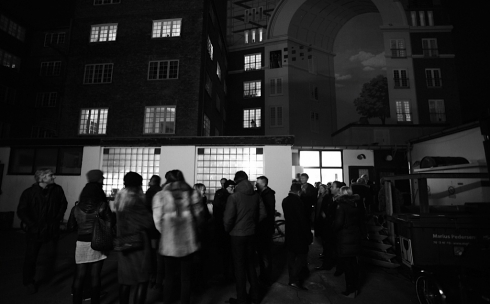 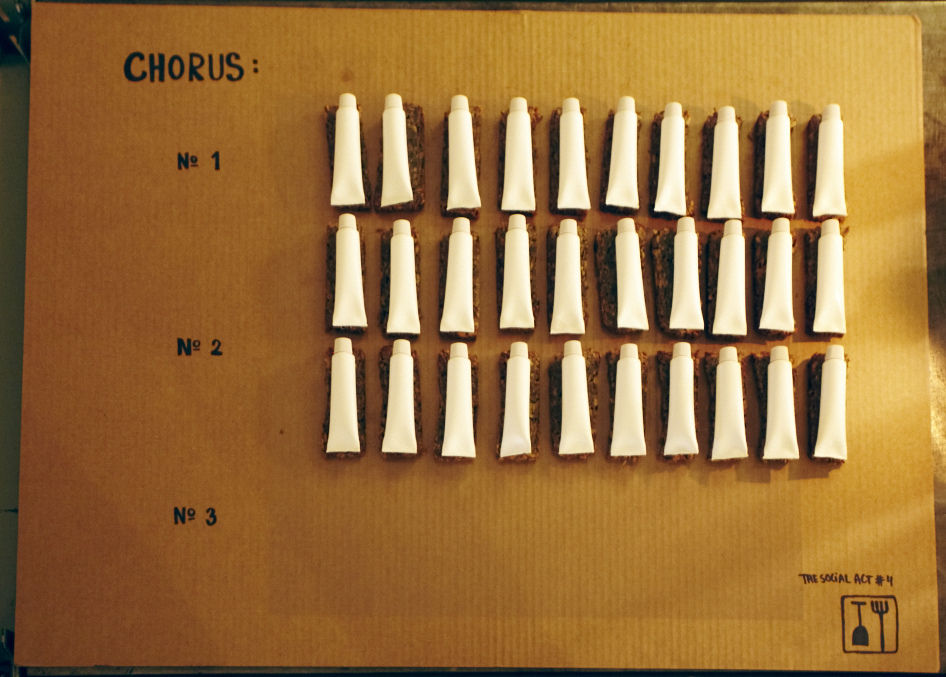 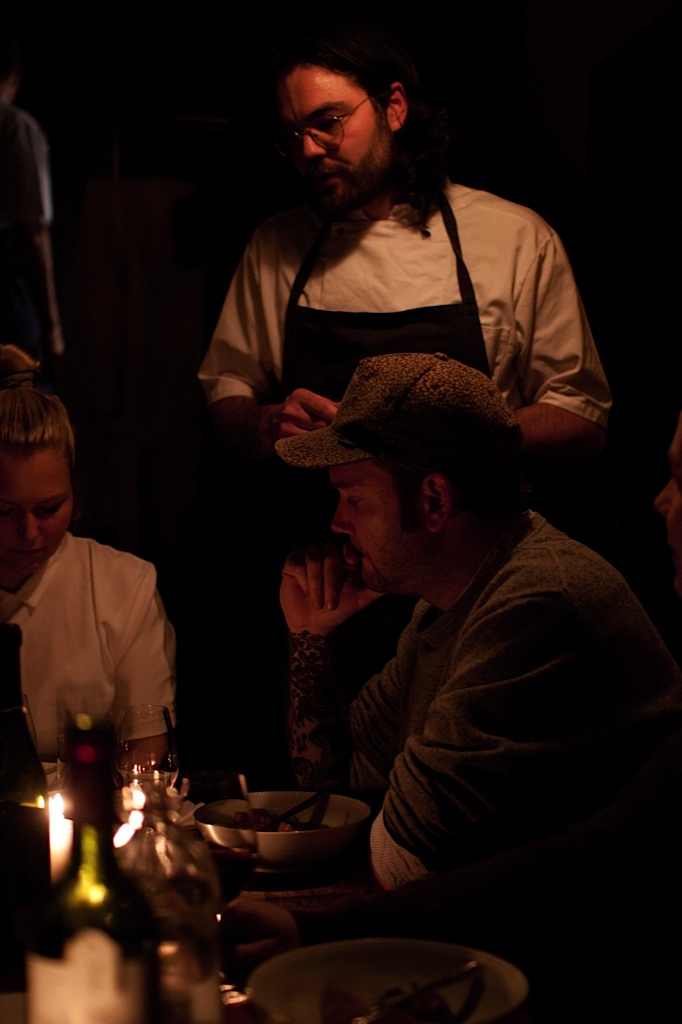 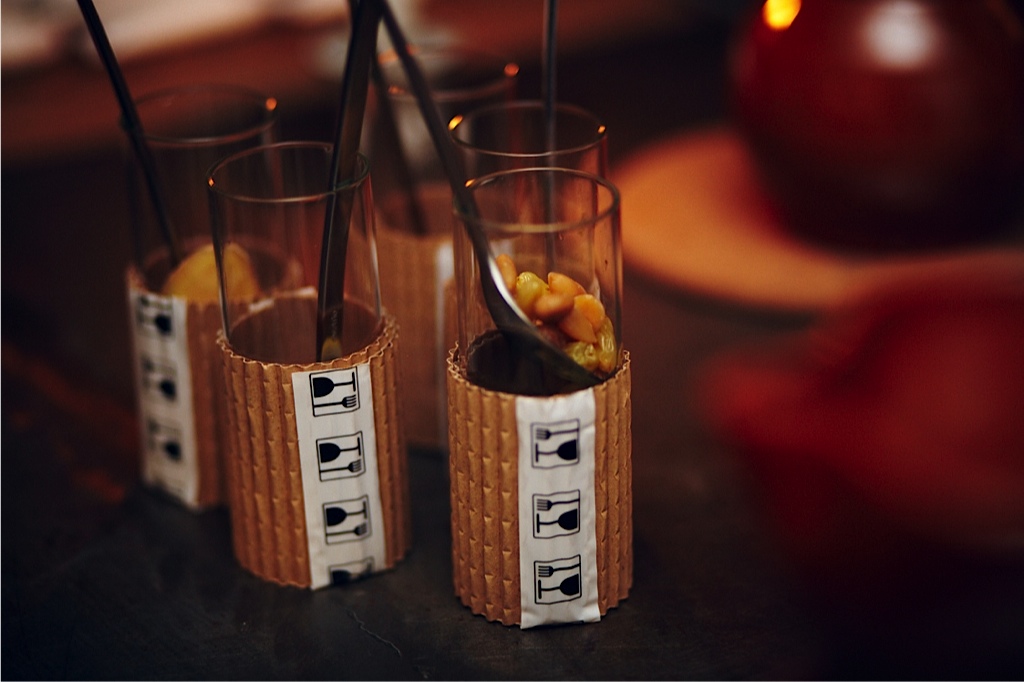 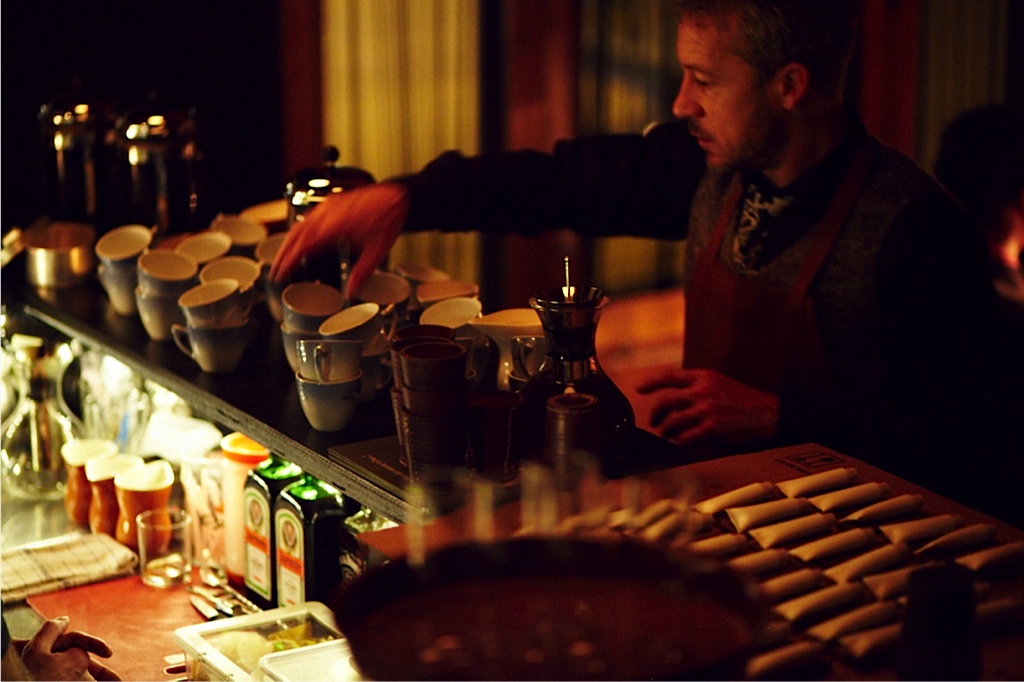 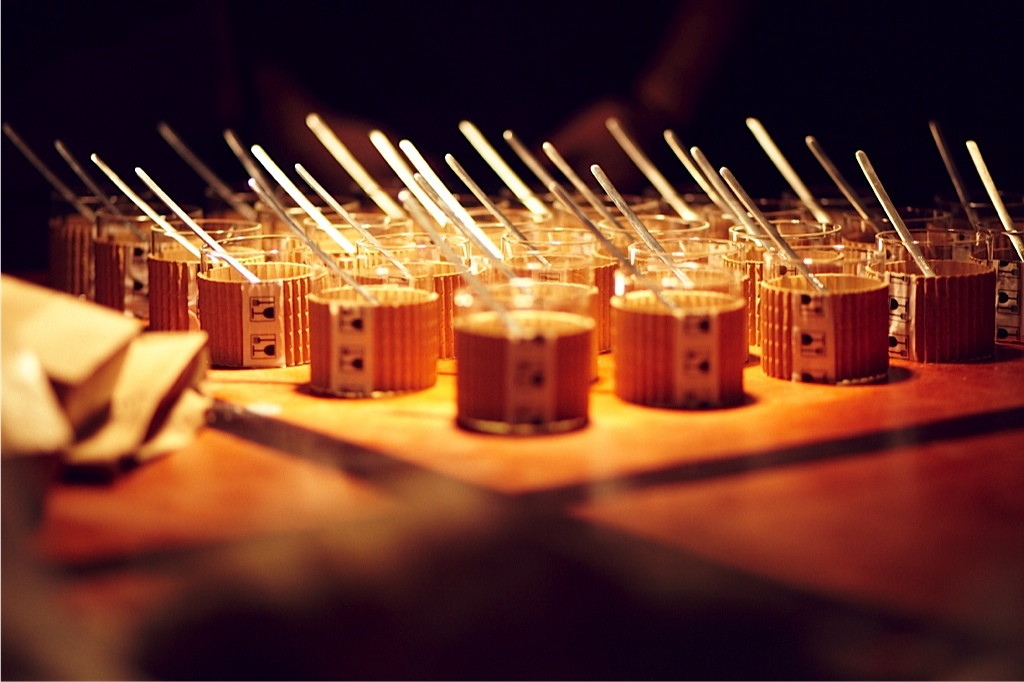