An evening in April Food Studio arranged a tribute evening to the old-fashioned baking traditions that in the 90's were on their way off breakfast tables across Norway. Now, this traditional craft is on it´s way back, with growing interest amongst hobby bakers, professionals, food bloggers and other baking devotees.

We invited some of the makers and traders of sourdough to meet with the new awareness and interest for this traditional craft, taking the knowledge from our grandparents and developing these into a new approach towards baking. Food Studio had the pleasure to sit down for a chat with the visiting bakers, who shared their stories, and their best advices for baking with sourdough.
With us this evening we had André Løvaas, Fanny Ivarsson, Jesper Hyldgaard Pedersen and Ivan Crenn. During the evening, they gave the participants a quick introduction to the magical world of sourdough and showed how to knead a finished dough into wonderful bread.
Both André, Jesper and Ivan has a background from the well-known bakery Åpent Bakeri in Oslo. It was started in 1998 by Øyvind Lofthus and Emmanuel Rang, and with their focus on long-time fermentation, handicraft tradition and high quality ingredients they have been a driving force in the business, and changed the way Norwegians relate to their everyday bread.

Our bakers this evening all have something in common. They discovered how much additives, semi-finished products and lack of knowledge there was in the modern baking industry, and they refused to be a part of it. They chose to go back to baking bread as it has been done for centuries, and retrieved their passion for bread.

Food Studio: How come you started working with old methods and sourdough?
André: I started my career in a semi-industrial bakery, and soon found out that being a baker wasn`t at all what I had expected it to be. The profession is communicated to the outside world as a handicraft, but often reminds more of the job of an industrial worker.
Tired of operating machines, I quit and went to music school for a couple of years. During the summer, I worked in a bakery, and the old baker I worked for told me to don`t give up on the trade just yet. “Go to Oslo! There`s a couple of crazy guys doing something really exiting there. I don’t really know what it is, but you have to go and check it out.” And so I went.
The place was Åpent Bakeri, and that’s where I learned the artisanal way of working with long-time fermentation and sourdough. I regained the spark, and stayed there for eleven years. Now I am working at Lantmännen Ceralia mill in Oslo, giving customer support and working on finding the perfect flour blend.
Jesper: Yes, for me as well, Åpent Bakeri had a major impact on my career. I had worked as a baker for many years in Denmark, was a bit tired of it, and came to Norway to work as a carpenter. Coincidence, and luck, brought me to Åpent Bakeri, and I ended up working in Norway’s, if not Scandinavia`s best bakery. I had worked a bit with sourdough in Denmark, but now my eyes were opened for softer doughs and old techniques. I really got my inspiration back.
Five years ago I opened up my own business, Brødbakerne, and we now have three shops located at Jar, Gjelleråsen and Skøyen. We also deliver bread for restaurants and cafés all over Oslo.
Fanny: My background is a bit different. After high school I did a lot of different things, and wasn`t sure what I wanted to do in the future. Cooking and baking has always been a part of my life, and little by little I understood that I wanted to work with food.
I soon discovered that there`s a lot of cheating going on in the business. The quality of the ingredients are terrible, there`s often lack of knowledge and the main focus is on making money.
This brought me to the conclusion that I wanted to start my own place, and from the beginning it`s been clear to me that I wanted to work with organic ingredients, and not compromise with the quality. Three years ago I opened up my own bakery, Alvar&Ivar surdegsbageri in Gothenburg, where we bake almost exclusively on sourdough, using only organic flour, most of it produced locally.
Ivan: I, on the other hand, was actually used to working with sourdough from France, where I started my career. The challenge for me, when I came to Norway, was the wholemeal sourdough and bread. In Scandinavia the bread is often heavier, made with coarse flour, whole grains and seeds. In France, we usually make different kinds of white bread, and the focus is on having a good development of gluten in the bread, so that it can endure the raising process. In Kolonihagen bakery, where I am production manager and co-owner, we work with Scandinavian ingredients and ancient grains like emmer and spelt, all 100% organic, but using French baking methods. 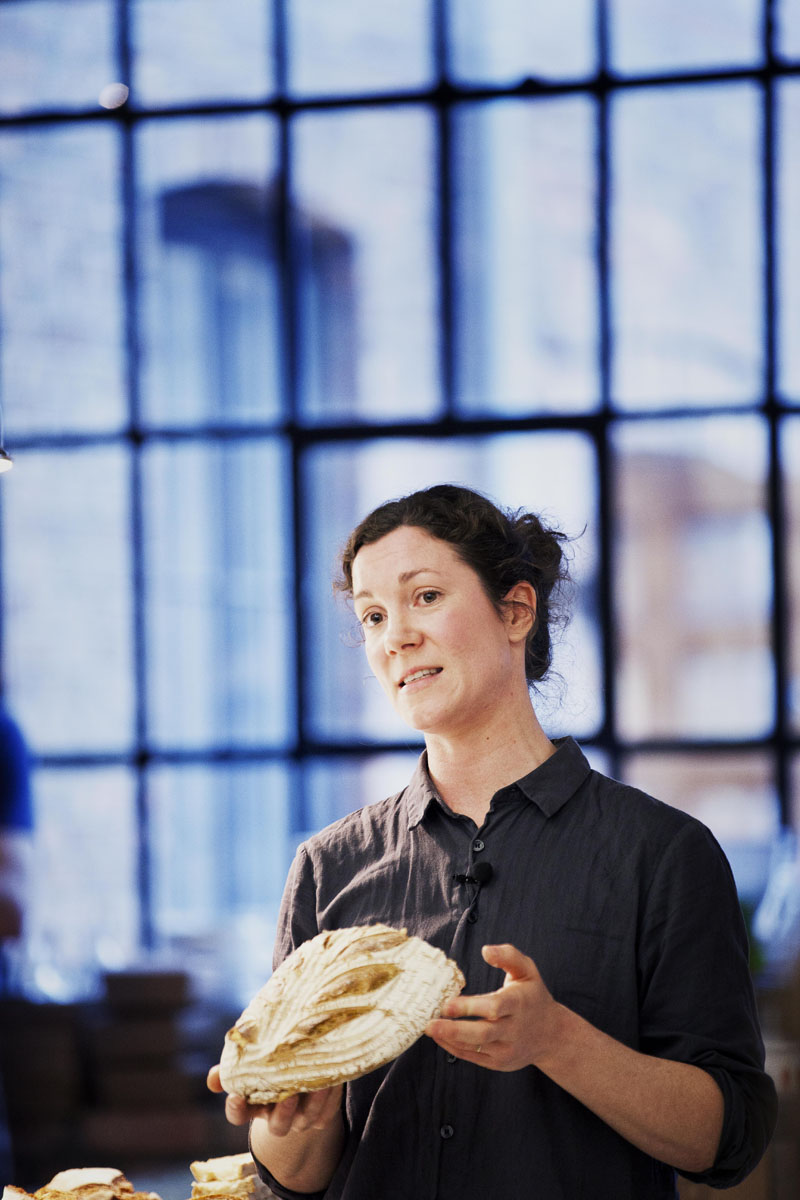 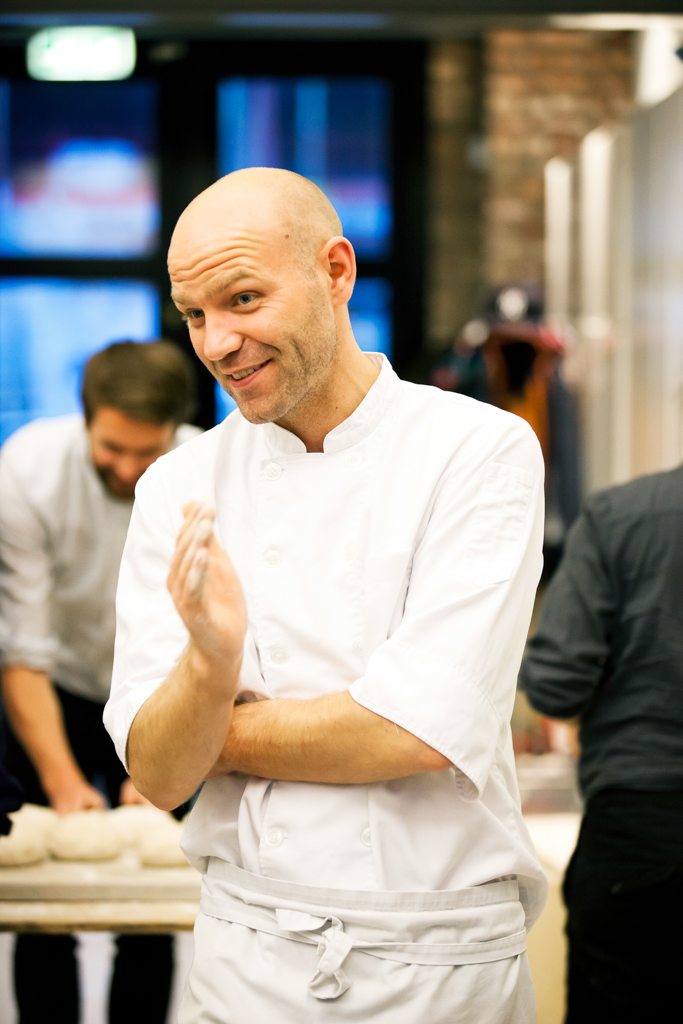 André: The most important thing is to have patience. Patience and to be truly into it. People always ask for an easy way to do it, but the easy solutions are rarely good. Sourdough is a slow process, but it`s not that much work. I often say it`s only twenty minutes of effort, but divided over five days.

Fanny: And it`s important that you don`t give up if you don`t get it right the first time. Just keep feeding your sourdough, and eventually it will come alive. A good tip is to buy some fresh flour, instead of using the one you have in the back of your kitchen cabinet.
André: And use organic flour for your sourdough starter. Because it`s not treated with pesticides, the grain contains more of the bacteria needed for a good starter.
Jesper: It`s starting the sourdough that is the difficult part of it, but once you get the hang of it, it is quite easy to work with. And the result product is so much better. 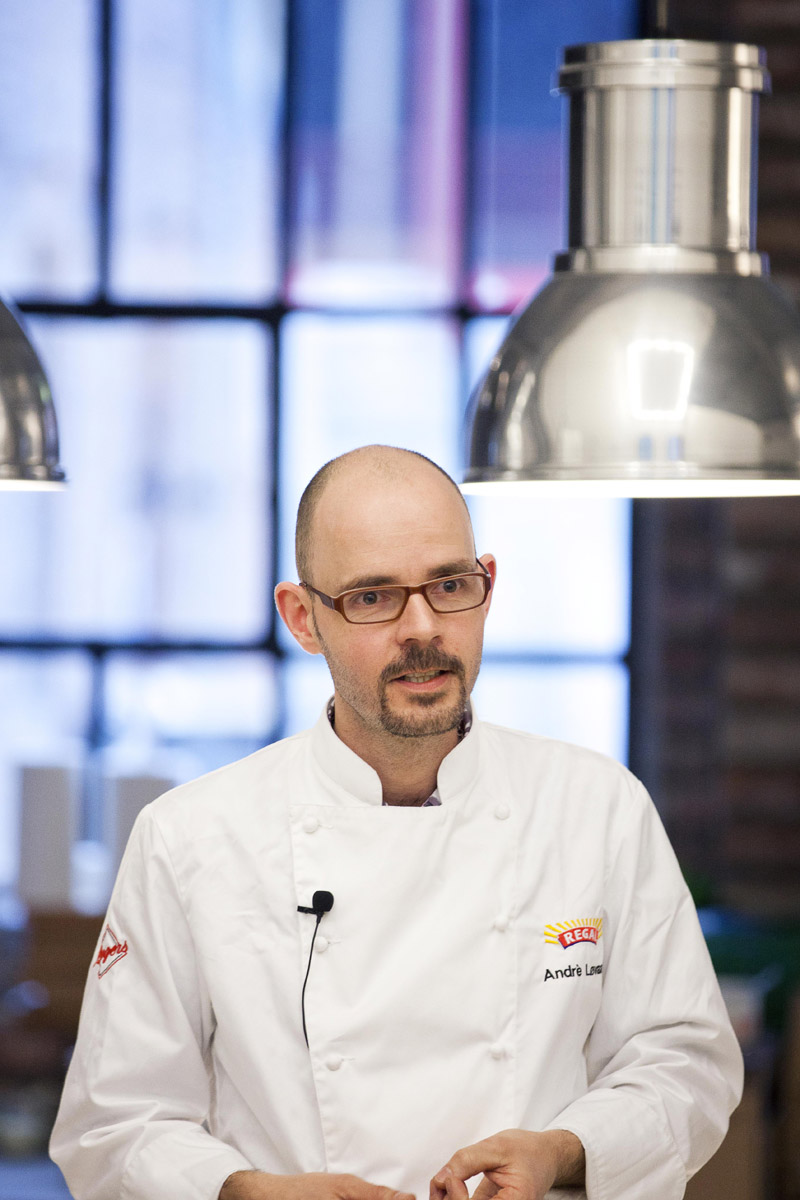 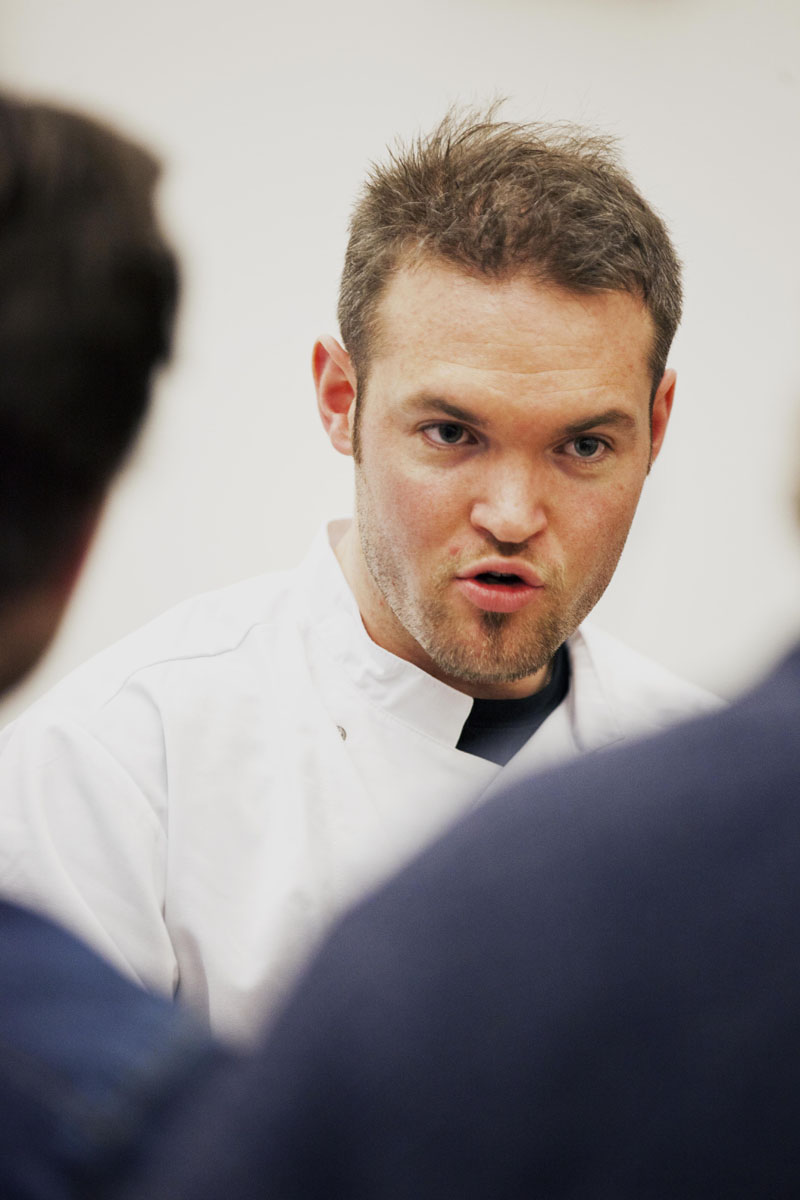 André: There are different ways of starting a sourdough, the most common of them is mixing equally amounts of flour and water and leaving it out on the kitchen counter until the next day, then removing some of the dough before adding more flour and water to the mix. Rye flour is a good and safe flour to start on. Then you repeat this process for 3-5 days, until the dough has the right taste and look.

Fanny: You can actually see it when it`s alive, it rises and starts bubbling.
André: It should smell fresh and acidic, and more importantly taste fresh and acidic. Don`t be afraid to taste it! How it tastes reflects where in the process it is – A new, immature sourdough feels sour on the tip of the tongue, kind of effervescent. The taste of a good, matured sourdough fills your whole mouth in a pleasant way. If the sourdough is very tart, and you can feel it in the back of your throat like a very acidic wine, it has started to produce acetic acid. It`s not ruined, but you have to feed it more often. The only thing you have to watch out for, is if it starts to smell like paint. Then it is producing ethylene, and you should throw it away. The sourdough is in many ways like human beings, it needs water and air to survive, and prefers a temperature at around 25 degrees.
Fanny: When you feed your dough it is important to remove some of the dough to make it more active. It`s the bacteria culture you want to save, and when you`re using a small amount of old dough in the new mix, there is more nutrient for each and every bacteria. I usually use ¼ of the old sourdough in the new mix.
Ivan: A good tip to kick your sourdough into life is to add a small teaspoon of honey. You can also start your sourdough on apples and pears. Just take a couple of fruits, cut them in half, put them in a bowl and add water until it covers, and then leave it in room temperature for a few days. Keep the peel on, that`s where the good bacteria are. Then you sift off the fruits, measure the water, and add an equal amount of flour to it. Then you leave it on your kitchen counter, and feed it every day for 3-5 days. 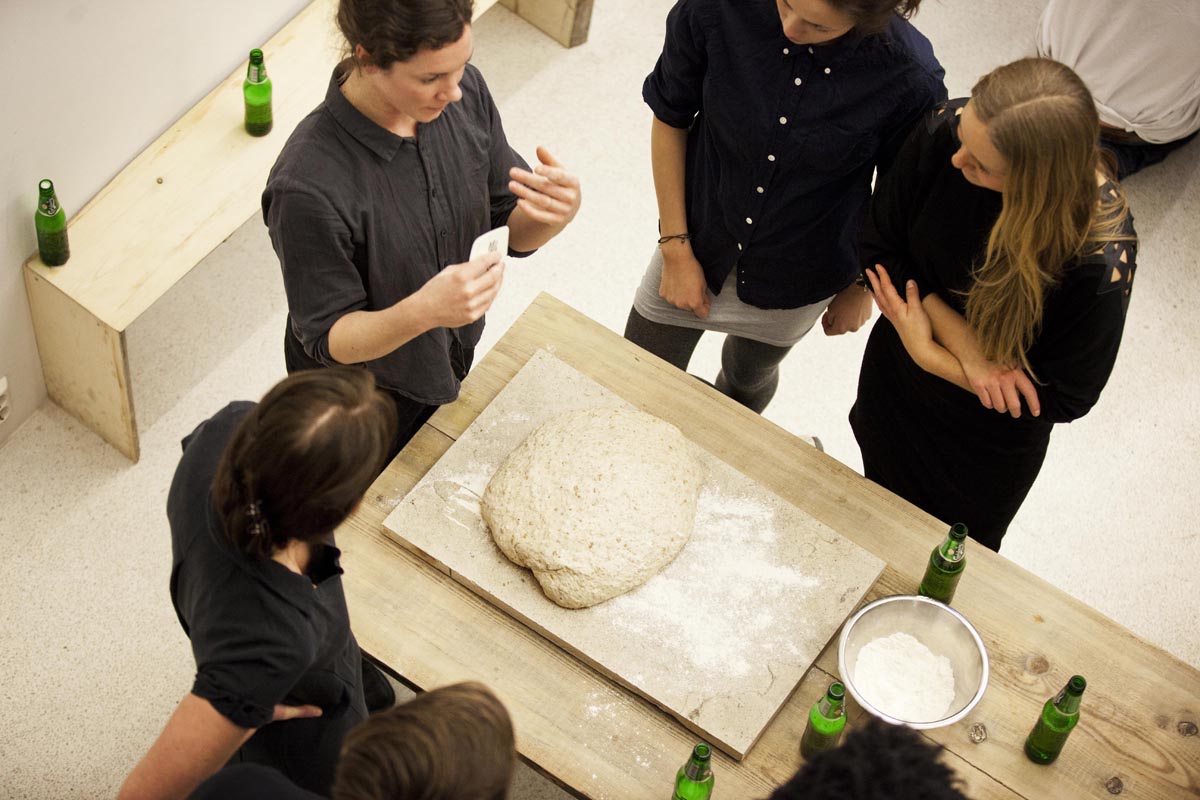 Food Studio: What do you do with your sourdough when you`re on vacation?
Ivan: You can keep it in the fridge if it`s a short one, or freeze it in small portions. The day before you want to bake, you take it out and put it in a bowl. When it`s defrosted you add equal amounts of flour and water, and leave it outside until the next day.
André: You could also dry the sourdough, by spreading it out on a baking paper and leaving it in room temperature until it`s dry. Then you mix it to a powder, and when you want to use it, you just add flour and water, and leave it out till the next day.
Or you could always have a stopover in Stockholm, and let it stay in the sourdough hotel while you`re away…
Food Studio: Hah that`s a fun idea… But can you tell us a little more about the benefits of baking with sourdough?
André: The lactic acid bacterium makes the crumb chewier, which makes it dry slower, and lowers the pH values, which makes it more durable. It works like natural bread improvers. And it´s also good for the health! The intestines take up the nutrients easier from sourdough breads.
Jesper: ..And of course it gives a lot of taste, and you can create a lot of different kinds of flavor in your bread.

Food Studio: There`s no doubt that people have discovered the advantages of sourdough, and in Sweden it`s been kind of a sourdough revolution, hasn`t it?
Fanny: Yes, it really has. A lot has happened in Stockholm the last ten years, but in Gothenburg it was standing still until 2008. By the time I opened up my bakery, it had exploded, so I guess the timing was good. This is something I feel really passionate about, and I think that it`s a persistent trend, and that it will just continue to evolve. After all, it`s not a new way of doing things. It`s a rediscovery of old techniques, that has worked for hundreds of years.
Photos: Christoffer Johannesen 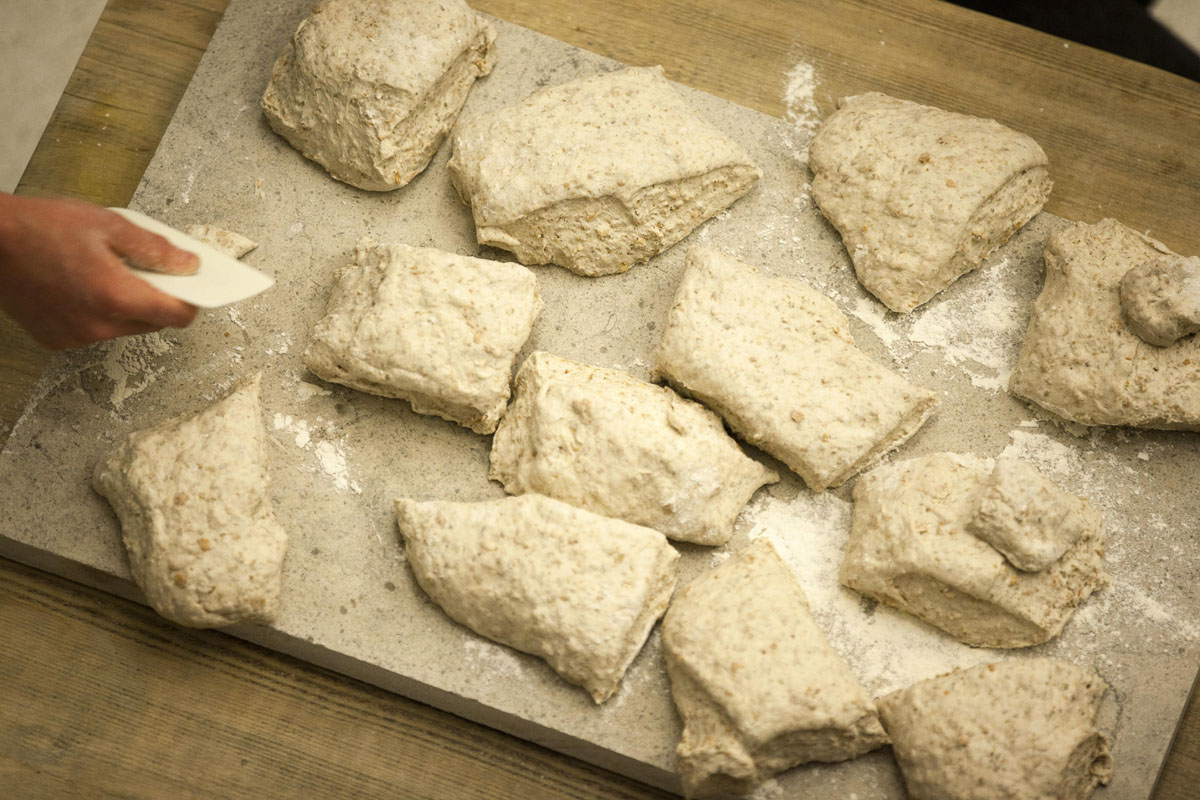 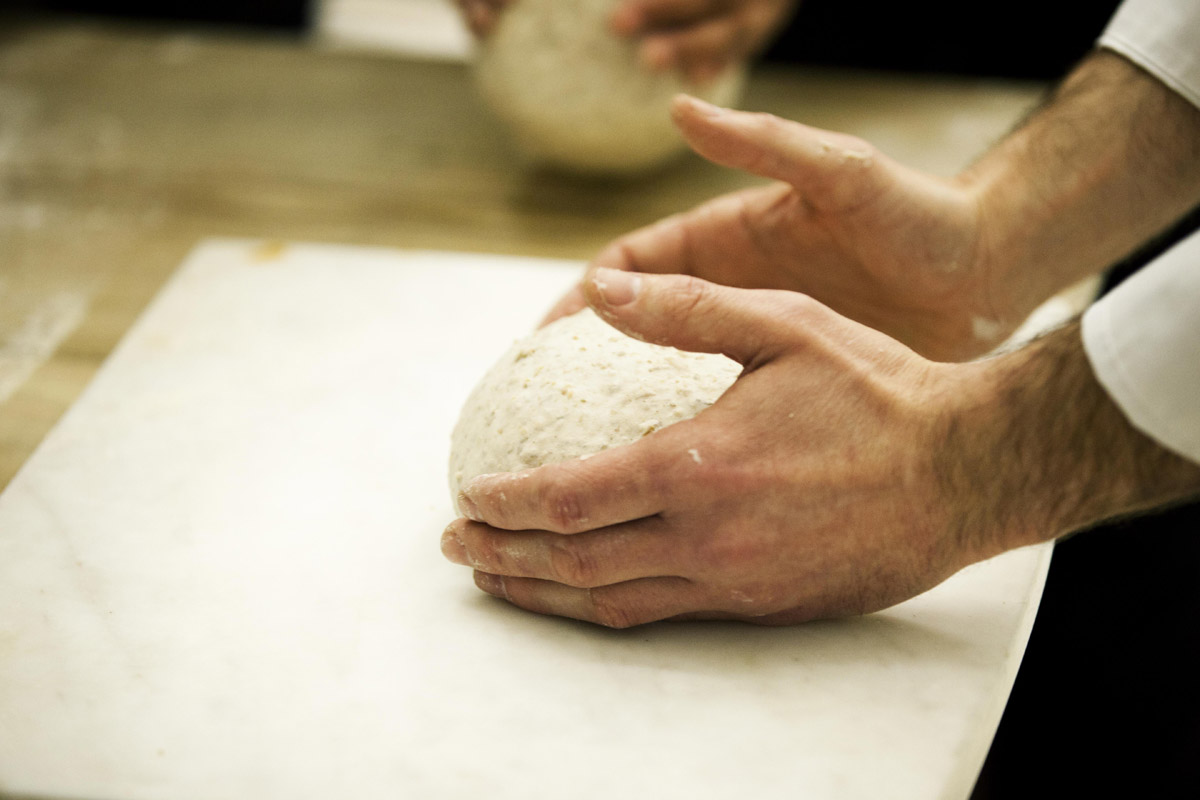