It all began up at the old cabin Sæterhytten on Dronningberget, where everyone met to a introductory speech by Idun Leinaas, followed by a warming, bright orange pumpkin soup heated over a bonfire and served in the chill autumnal air. As people finished their cup of soup, it was time to continue on in one of the four knowledge groups.

Group 1: Kenneth Thomassen – «And wander through the forest…» – an autumnal experience

Kenneth Thomassen – the arborist, the gardener of trees, a tree surgeon, took us into the yellow shimmering, but darkening woods of an autumnal Bygdøy, and we followed.

Stretching his arms up toward the tree crowns as if he somehow stood in a special union with the forest, we gathered around him.

–  To really experience the landscape, your surroundings, this forest, you have to take part in it, not only study it from a rational scientific distance, but let it inspire you in its immediate ways, play with it. You can start by touching it, studying the branches and structure of the trees, and the leaves, find leaves that inspire you. Study them, how they are built, what makes up a leaf? Then draw them, the way you saw them and what it inspired in you.

As most of us have grown unaccustomed to the childlike and open minded way of experiencing natural phenomenon, we got into it after a brief hesitation. Wandering with playful seriousness, studying the leaves on the ground and the magnificent birches, oaks, maples that rose above us. Covering the ground beneath with golden, red and brown leaves in all shades.

It feels good to walk in the woods for no other reason than being just there, seeing the forest in old and new ways, like meeting a friend, from a long time ago you hardly remember anymore.

As the twilight coloured the day in dark blue and pinkish hues of the sun setting, we went into the warm lights of Sæterhytten, an old cabin of historical significance on top of Dronningberget (The Queen’s Hill), to draw what we had experienced and gathered from the forest.

We drew, in focused silence under the friendly and inspiring guidance of Kenneth. Every drawing and impression expressed, as unique as ourselves. And when the bell chimed in the distance, and the time had come for the anticipated evening meal, we already felt strangely satisfied.  But like children after a day full of playful adventures, we suddenly felt hungry, put up a fast pace and wandered through the now dark woods and silent paths with happiness in our hearts.

Group 2: Kjartan Fønstelien – A historic adventure of Bygdøy and its food culture

Kjartan Fønstelien, Food Studio’s archaeologist and avid historian entertained and informed one of the groups with tales from the archaeological history of Bygdøy, with ample digressions, anecdotes and tidbits from the distant past to the near future.

After walking down from Dronningberget to one of the lawns of the Royal Estate, we learned about Bygdøy and its history from the Stone Age to becoming the playground of the upper class, first for hunting and later for gardening. There have been some archaelogical excavations on Bygdøy, some investigating the very earliest settlement of the peninsula, others the life in the Middle Ages, and, amusingly, investigations of the present by the somewhat controversial arcaheological method of ”garbology” – rooting through a person’s trash to investigate their personality. In this case the researchers were rebels from the anarchistic zine Gateavisa who in the 80s stole the trash of the prime ministeral candidates Gro Harlem Brundtland and Kåre Willoch to reveal who the Norwegian people really would be voting for in the election.

Kjartan gave a critical assessment of the food served at the museums on Bygdøy, which show off some of our nations proudest sides, but have a very poor quality to offer. Why don’t they take inspiration from the topics they have on display? Kjartan asks. The Kon-Tiki fish stew is a notable exception at the Kon-Tiki museum, but how about Viking-inspired food at the Viking ship museum, polar expedition-themed food at the Maritime museum and so on, instead of hot dogs, soda, waffles and calzones? Kjartan’s information-packed session was fun and educational for everyone present.

Group 3: Idun og Malin – seeds, or where it all begins

Gardener Malin Wedrén and Idun Leinaas, manager of the Biodynamic Association of Norway, invited us on a walk and gathering of seeds at Hengsenga at Bygdøy. We were taken on an adventurous journey through this private garden, where a large number of wild crops and flowers are grown. At the beginning of the walk we were given an assignment – to consider what a seeds really are; how do they look and where can we find them on diffent plants?

Malin and Idun taught us how to fold a practical paper seedbag which fitted perfectly into a pocket or handbag, which makes it easy to gather seeds on the go, either it is from your own or someone else’s garden. There’s nothing else that the plants would rather want than to bloom, develop seeds and spread its genetic offspring as vastly as possible. Seeds are all around, and one only has to pick, clean, pack and write down its name and where it is from, before one can sow it again.

But why should one bother to gather seeds? For once, it is good fun and cheap – one can gather seeds from a magical garden that one dreams back to and recreate it in one’s own garden. Second, it raises awareness on where our food comes from and how it has come to exist. There has been a 50 % drop in the world’s genetical biodiversity when it comes to food crops, anad in other words, what the humans have been working to develop for the last 10 000 is about to be depleted. In addition to preserving and using old types of grains and growths, it is important to develop new types that work with the ever changing climate. These new growths will be able to tackle the challenges that may arise – whether it may be plant diseases, product requirements, industrial production or climate changes.

We also got a short lecture on the Svalbard Global Seed Vault and other seedbanks located in Norway and abroad. More than 1400 seedbanks all over the world have taken the task upon them to conserve seeds in order to preserve the global biodiversity.

At the end, we got some seeds that Malin and Idun had picked in the garden and cleaned, and we also got to bring home a local variety of pea, jærert, which had recently been rediscovered and used by the local farmers.

As a biology teacher Linda has sought to incorporate learning of subject matter with experiential learning. She taught ecology through work with pupils on ecological farms, where the youth were integrated in the daily work tasks as they learn to know the cycles and challenges of a food production in balance with local biological premises.

The course on soil and composting started by looking at soil and soil profiles in field beside the garden, in the birch forest up the hill and in the garden. Everyone held the different types of soil in their hands and attempted to describe what they observed. We could see enormous differences between the field and the garden, only separated by a few meters. In the forest we could observe the teeming life and the natural composting process in the leaf layer.

We also looked at some different types of compost and the soil which can be bought in bags at the garden centers. Although the evening was getting dark, we then proceeded to compose a compost pile with remains from the vegetable garden, weeds, grass, cow manure and scrapings from meals earlier in the week. We tried to balance the «slow» materials (much carbon!) with the «fast» materials (much nitrogen) to achieve a composting process that would get warm rapidly (even so late in the Fall) and still have enough structure and air to feed the microorganisms that break down the organic wastes and build up the humus rich compost soil. 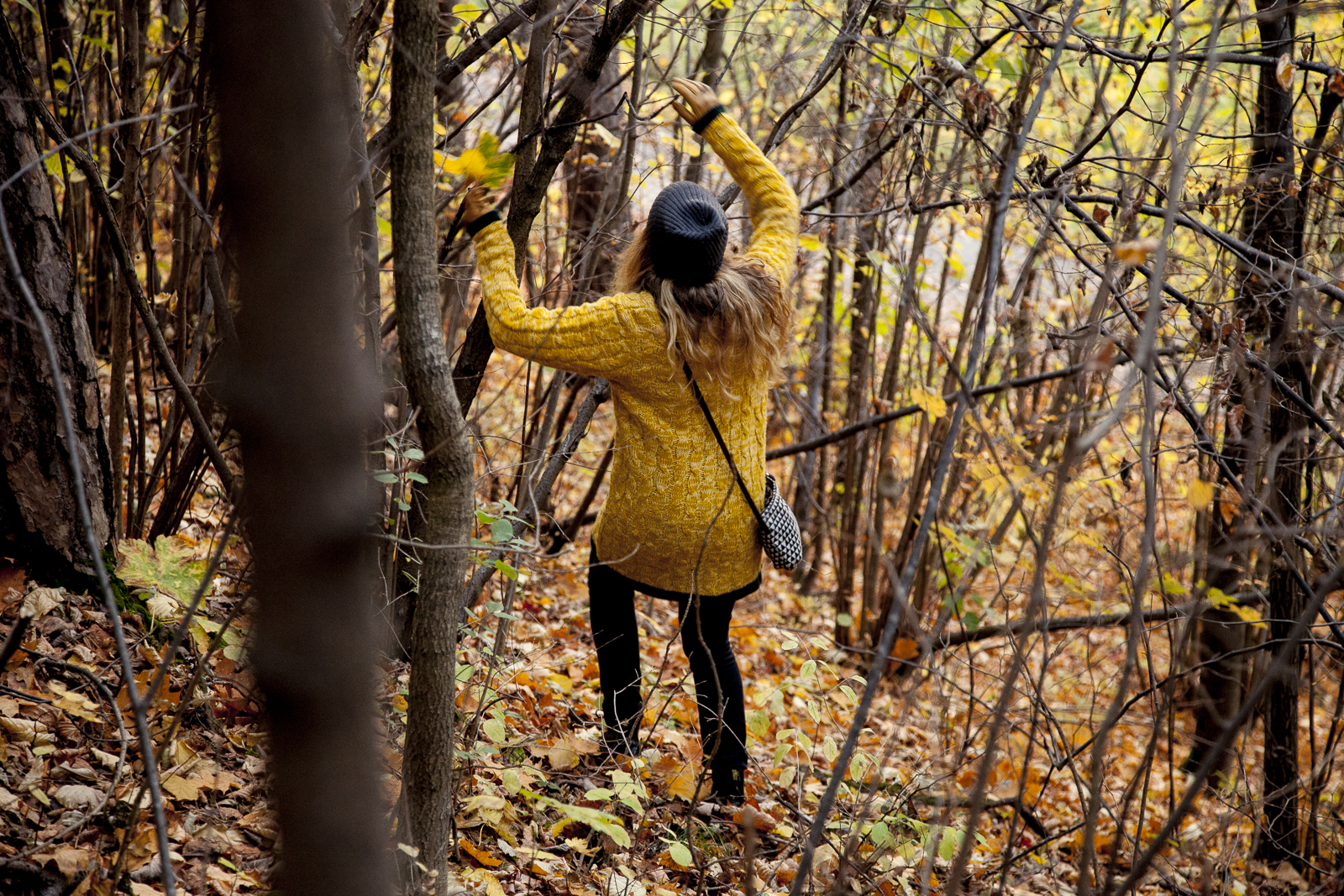 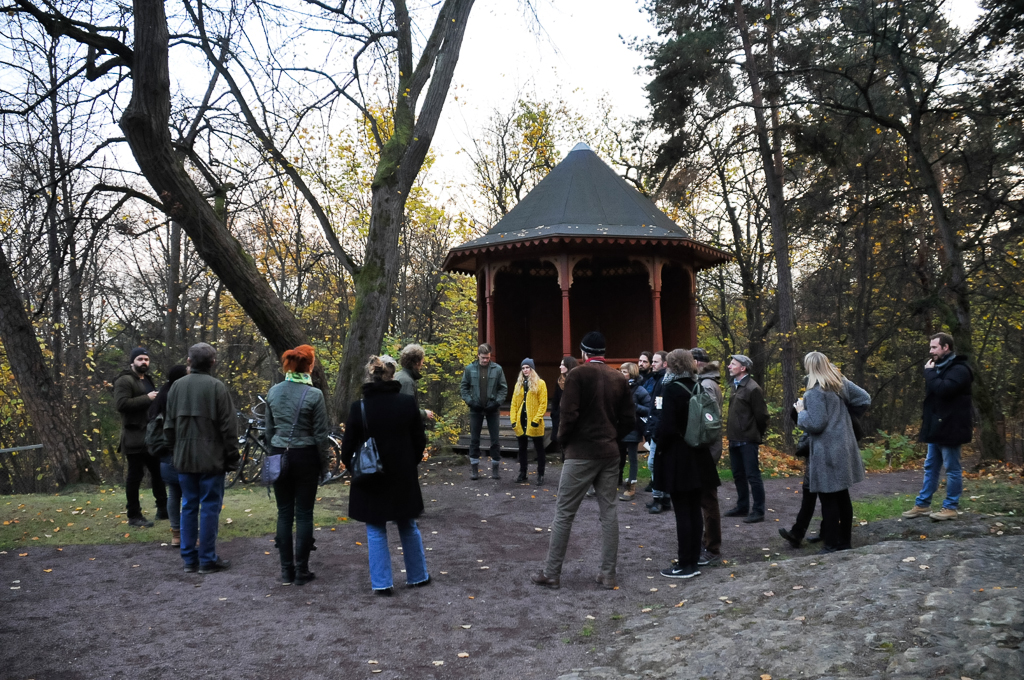 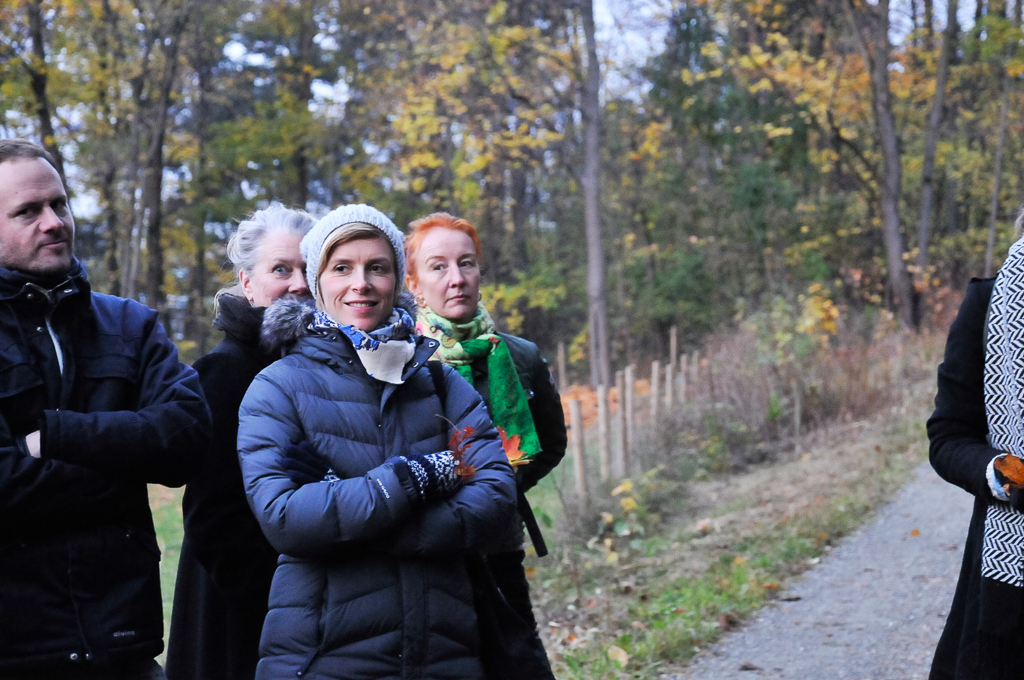 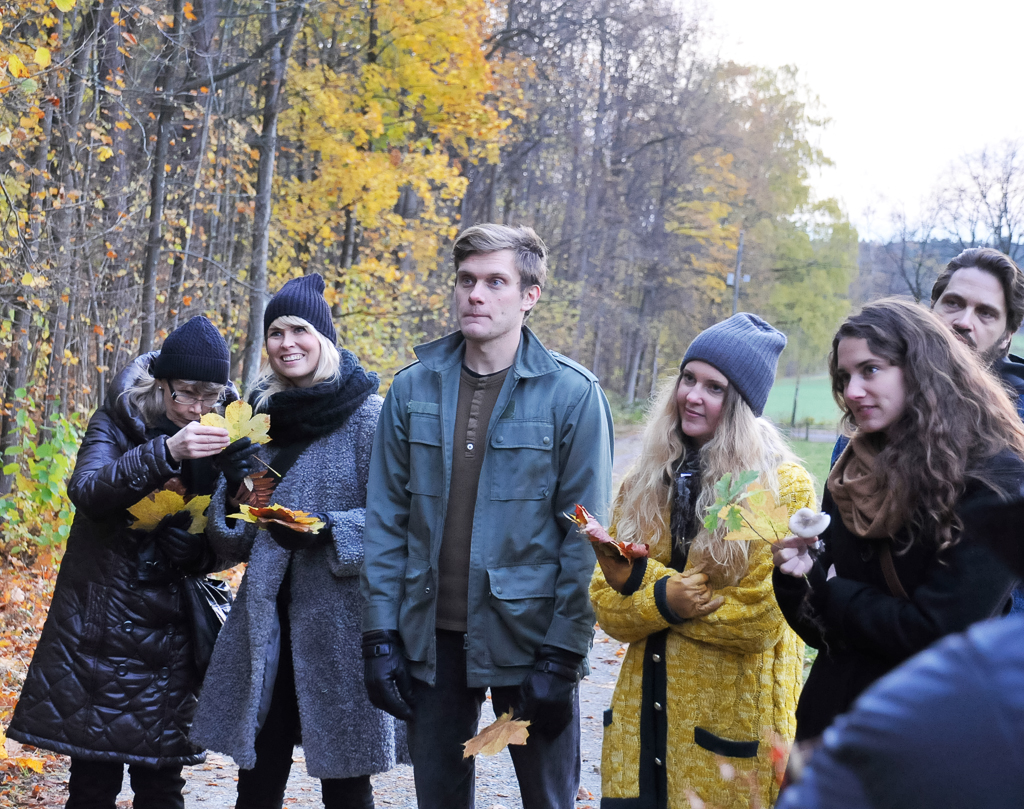 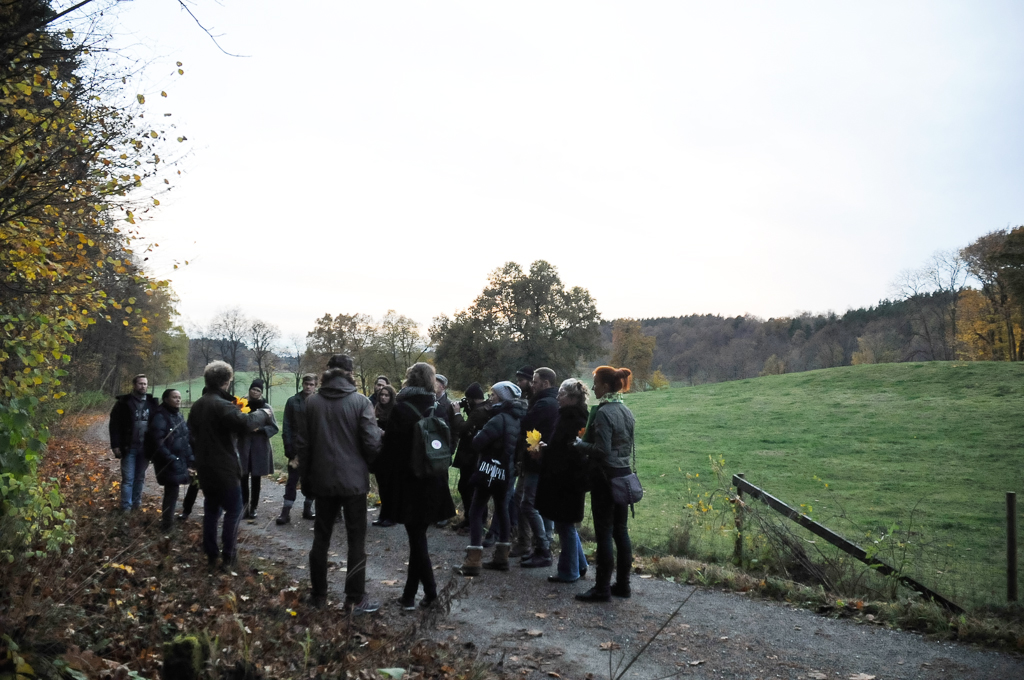 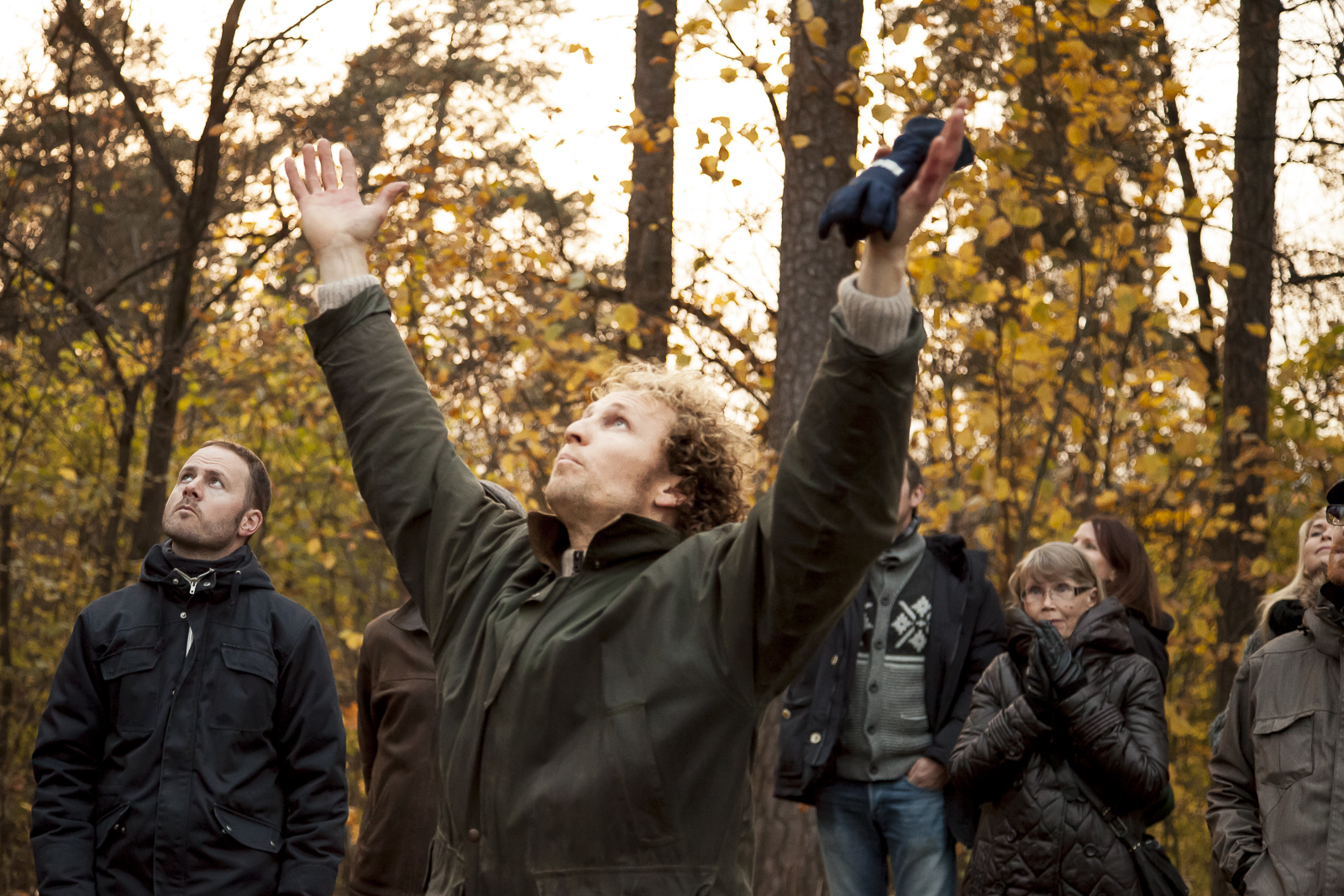 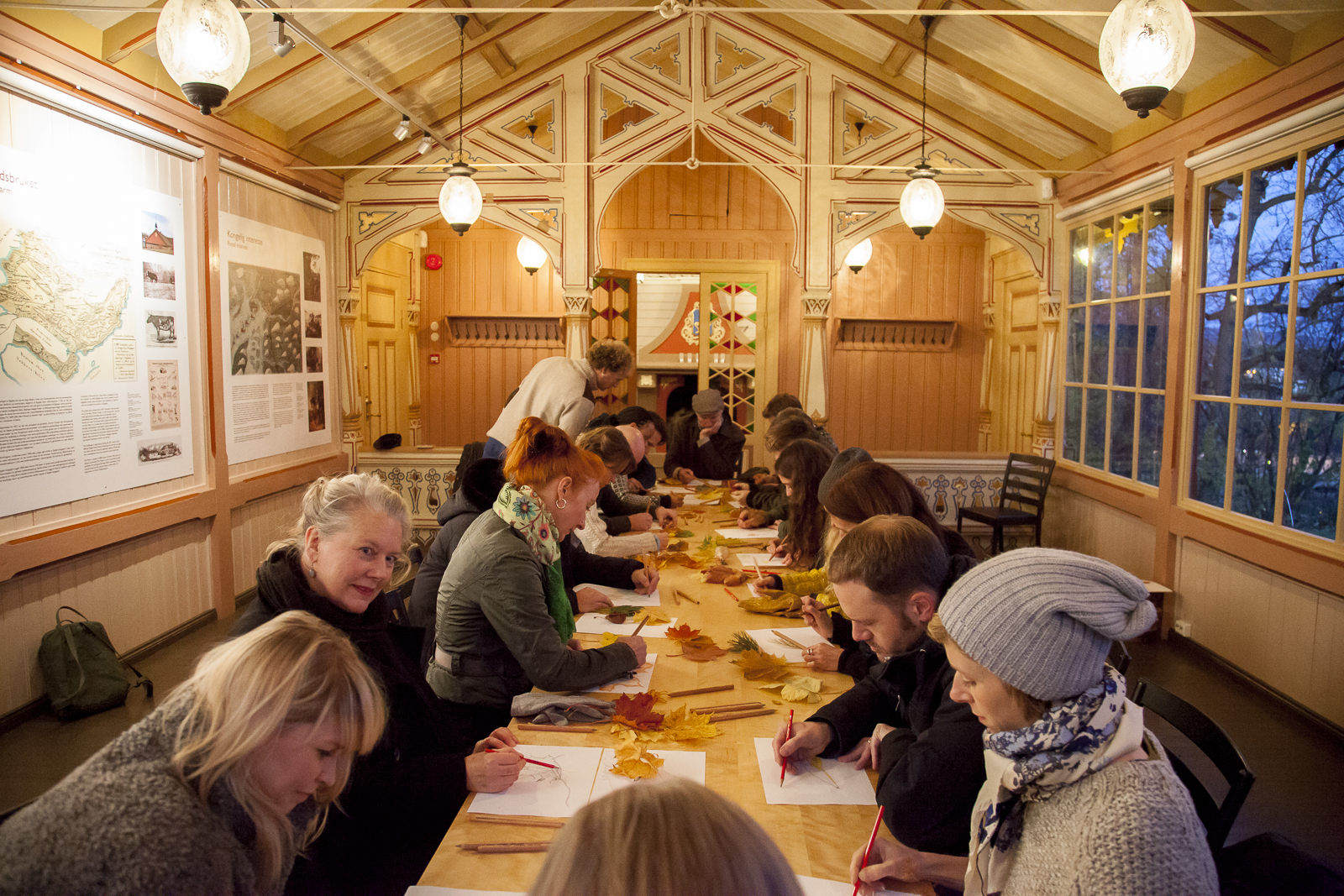 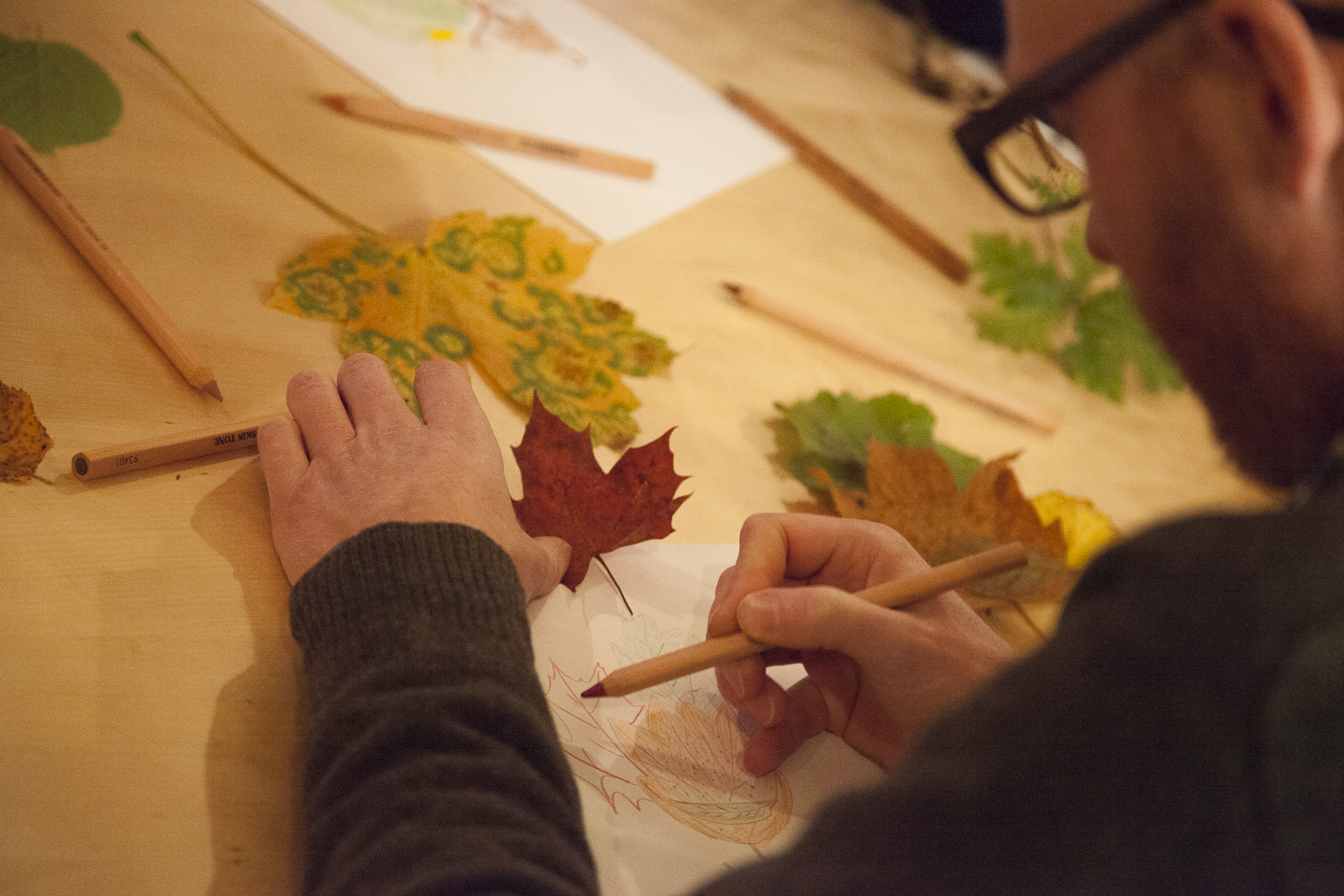 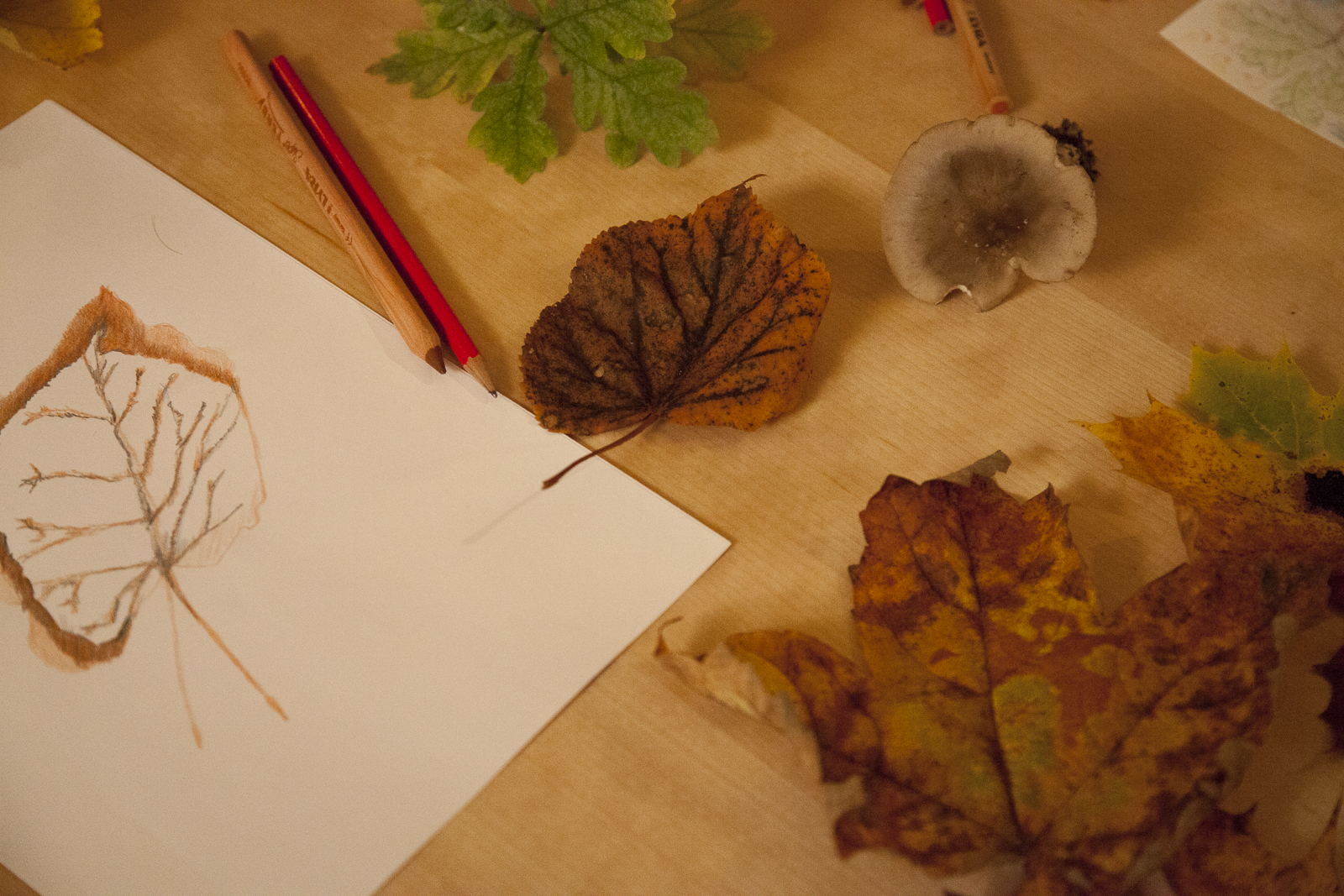