For this event Food Studio played host to the remarkable Danish craft brewery Bøgedal, located some 200km to the west of Copenhagen. Gitte Holmboe made the journey over from Denmark to personally present each of the beers she would be serving and she was joined by chef Thomas Randsøe, who had put together a five course seafood menu that would best showcase Bøgedal's beers.

In a lavvo, a traditional sami tent, the Danish chef Thomas Randsø and Food Studio’s own chef Magne Ilsaas served the guests some of the best produce from the sea paired with the wonderful beers from Bøgedal. We hope these recipes will inspire; not only to serve good beer with your food, but also to experiment cooking using beer.

Moestue Grape Selections is the Norwegian importer of Bøgedal beer. For more information contact them at moestue@moestue.com

This dish was served by the campfire as a new take on the traditional welcoming aperitif. The bread is a slightly more interesting version of the twist bread we all grew up scorching over the campfire.

The recipe for the beer grog is inspired by chef Thomas´ father, who learned how to make this drink working at the harbor during his youth. Back in the days the dockers and fishermen used it to stay warm during cold winter days. It still has that effect – which makes it a perfect drink after long days of skiing.

Soak the barley in water over night. Boil it in lightly salted water until it’s soft, but still has some bite. Cool down. Cut the bacon in small cubes, and fry in a pan until it’s crispy.

Mix the flour, dry yeast and salt. Add the water, bacon and barley and knead the dough until it feels smooth and elastic. Cover the bowl with plastic and let the dough rise for an hour. Roll the dough into finger thick rods, let them rise for another 20-30 minutes and bake them in an oven at approx. 180°C until crisp. Serve when still warm.

Heat the beer slowly on low heat, without letting it boil. Add rum, sugar and a squeeze of lemon to taste. Serve in mugs with the breadstick on the side. Cheers!

We served the oysters naturel with only a bit of beer foam on top. It may sound simple, but paired with two different kinds of beer it becomes noteworthy, as the distinction between the beer and oysters become very clear.

Open the oysters and smell them to make sure they are fresh. They should smell like clean seawater. Right before serving, add a little bit of beer foam on top.

In this recipe the sauce is made resembling a traditional beurre blanc, but instead of using white wine, we have used a wheat beer with plenty of coriander and orange. The Bøgedal wheat beer has more residual sugar than most wheat beers, and is full bodied and fruity.

When we were out in the woods, we replaced red fish with halibut because of low harvest that day, but here is the original recipe.

Boil up everything and let it simmer until it is reduced to approx. 0,8 dl. Pour the liquid trough a sieve into a bowl. Place the bowl over a pan with a little bit of water on low heat. Add the cold butter in small cubes little by little, while whisking it in. This way the sauce will emulsify. Add salt and lemon to taste. Don’t overheat it or leave it standing too long before using it, as you will risk it splitting.

Remove the fish scales from the skin and cut the fish into 4 pieces. Fry it, skin side, until it turns crispy. Cut the apples in small cubes and finely chop the kale. Mix the apples and the kale with the sauce and serve on top of the fish.

Mussels and other kinds of seafood are most commonly eaten in the summertime, but the quality is actually much better in the wintertime. The combination between the rich almond milk, the floral fragrances of the beer and the salty meat is a variation on mussels well suited for cold winter days.

Soak the almonds in water over night. Blend them with the 2 dl of water and strain it through a sift cloth. It is the liquid you are using for this dish, but the rest of the almonds you can dry in the oven on low heat and use as almond flour.

Soak the mussels in cold water for about 20 minutes. Remove the “beard”. Check your mussels, if any of them are open just give them a little tap and they should close; if they don’t they are dead and no good to eat, so throw them away.
Finely chop the garlic and the shallot, and cut the meat in small cubes. Sautee it in a pan using a splash of neutral oil. Add 1,5 dl of almond milk and 1,5 dl of beer and bring to a boil. Add the mussels and steam with the lid on until they open. If any of them don`t open, throw them away. Serve the mussels in a tall beer glass.

Monkfish and langoustines poached in golden ale with sea buckthorn

Sea buckthorn is a small, orange berry with a distinct sour taste, which is reminiscent of passion fruit. It has a very high content of vitamin C, about 15 times higher than oranges. In Norway it mainly grows along the coast, typically in dry, sandy areas.

Chop the carrots and onion in thin slices, and place the coriander and orange zest in a thin cotton bag. Place it in a casserole dish with the beer and boil it up. Once it boils, remove it straight away from the heat and cool down. Let it rest for at least 3-4 hours.

Strain away the vegetables and spices, but keep the vegetables for later. Bring the brine up to just below boiling point. Chop the monkfish and langoustine into big pieces and poach them in the brine for a few minutes. When they are finished, lift them out and let them rest in a warm place. Take about of the brine and use a hand mixer to blend in the butter in small cubes, little by little. Add the vegetables, salt & pepper and sea buckthorn to taste. Add the herbs right before serving. Place the fish and langoustine in deep, hot bowls and pour over the sauce.

Beer might not strike you as the most obvious pairing for a chocolate dessert, but a dark, sweet beer like #308 from Bøgedal and a dessert based on dark chocolate is actually a killer combination. With lots of chocolate and coffee, the beer is the perfect ending to a great meal.

Put the beer, some lemon zest, cinnamon and juniper in to a casserole dish. Split the vanilla pod and scrape out the seeds. Add both the pod and the seeds to the casserole dish. Pour in the beer and heat it. Add sugar to taste. Peel the pears, but without removing the stem. Poach them in the beer until they are tender, but still have a little bit of bite. Cool down and leave the pears, refrigerated, in the beer brine for 4-5 days. This will give them time to extract flavor and color from the beer.
Take some of the beer brine and reduce it into syrup, and cool down. Add a bit of cocoa nibs to the syrup.

Mix the icing sugar, flour and butter in a food processor quickly until it resembles fine breadcrumbs. Add the egg and the water and mix until it is smooth. Don’t work the pastry too much at this stage or it will become elastic and chewy, not crumbly and short. Leave it in the fridge for a few hours, or preferably until the next day.
Roll out the dough to about 2 mm thick and place in four tart molds. Using a fork, prick the crust all over. Put the molds in the fridge for 30 min. Cover them with aluminum foil and blind bake them in the oven at 200 ℃ until they are part baked.

Boil up the cream and milk. Finely chop the chocolate and place in a bowl. Pour over the cream in a thin stream and stir with a spatula from the middle until the ganache is emulsified. Whip in the egg, and fill the shortcrust in the molds with the mixture. Put it back in the oven, at 150℃, and bake for 15 minutes more.

Serve the tarts with the pears, and drizzle with the beer syrup. 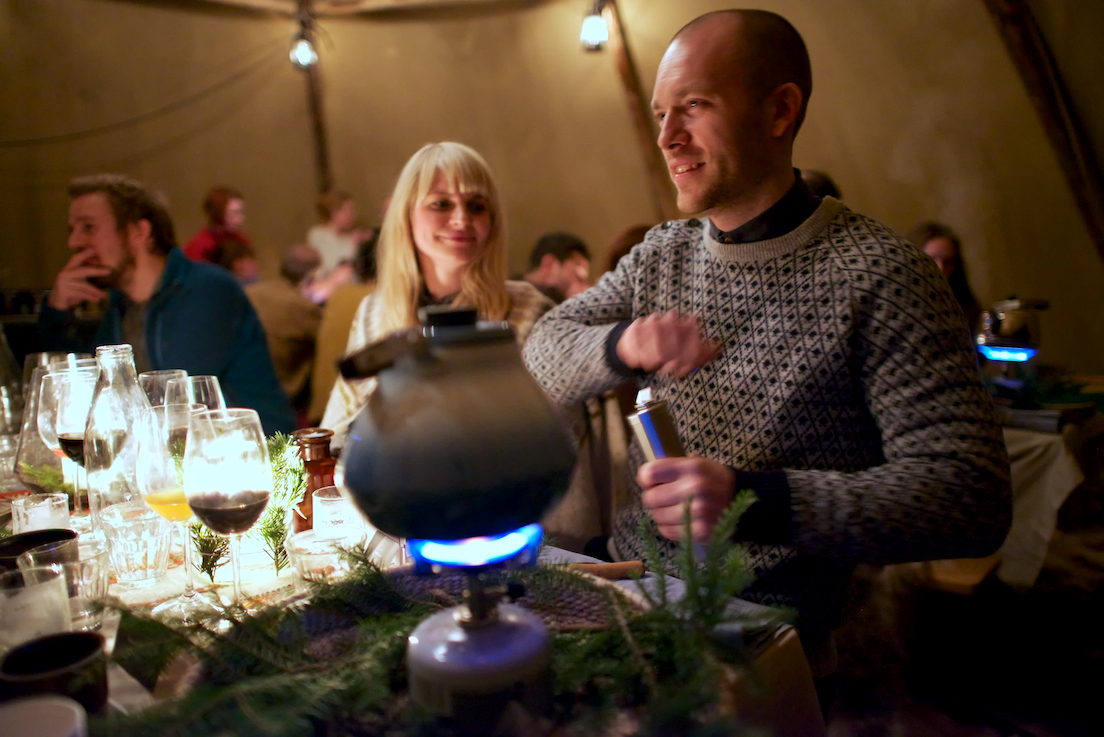 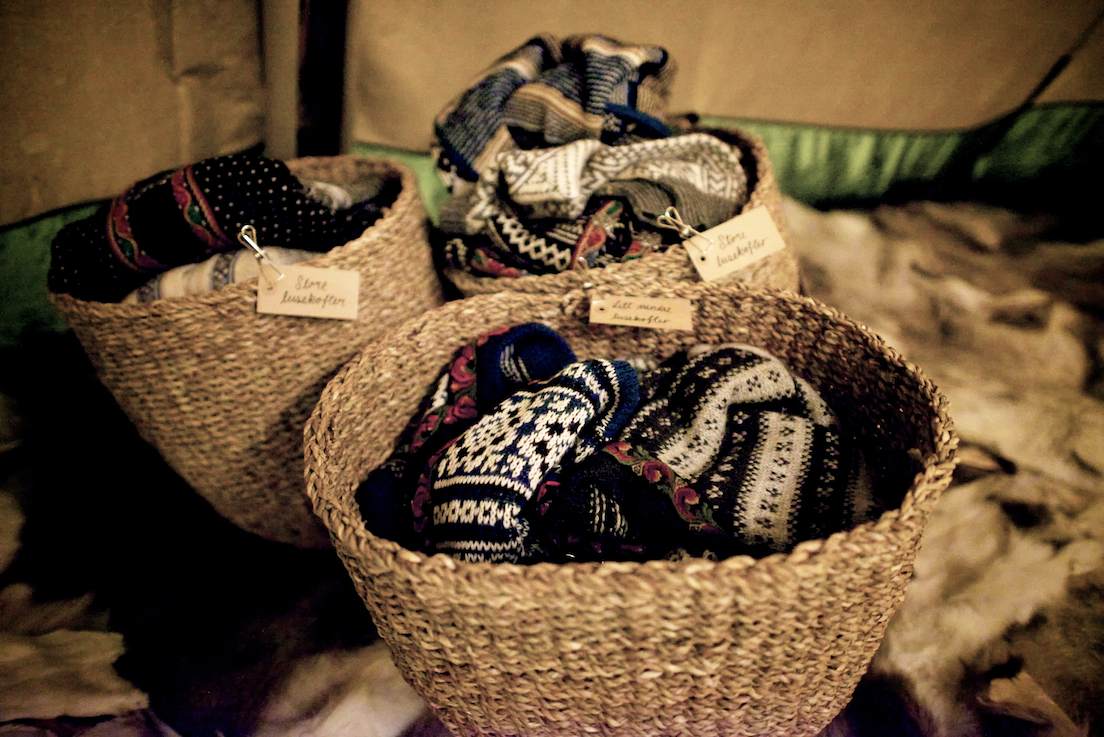 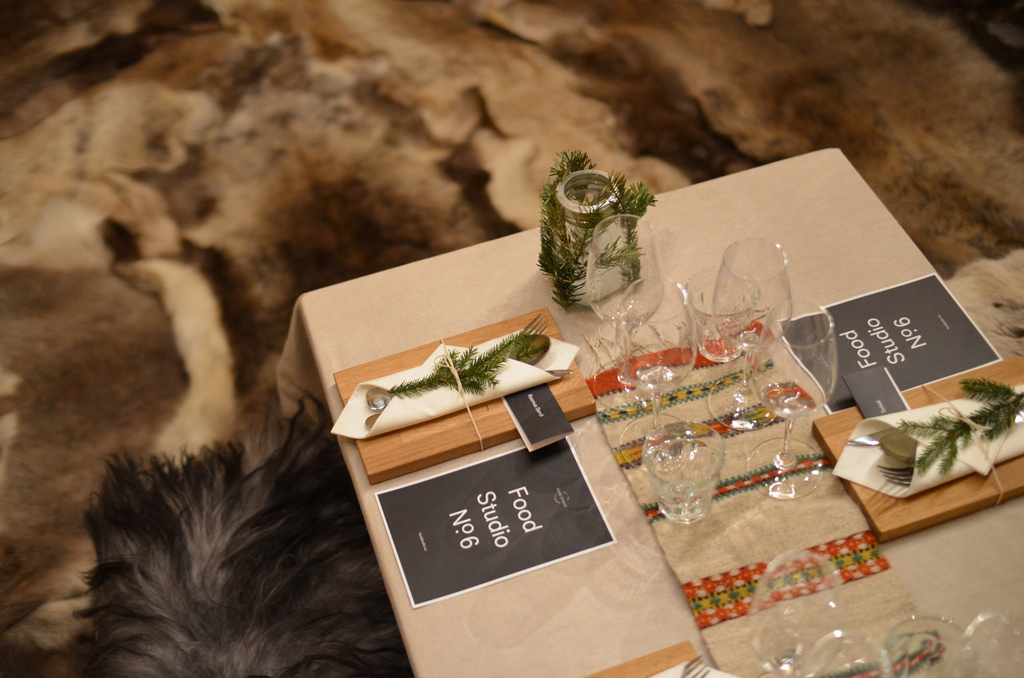 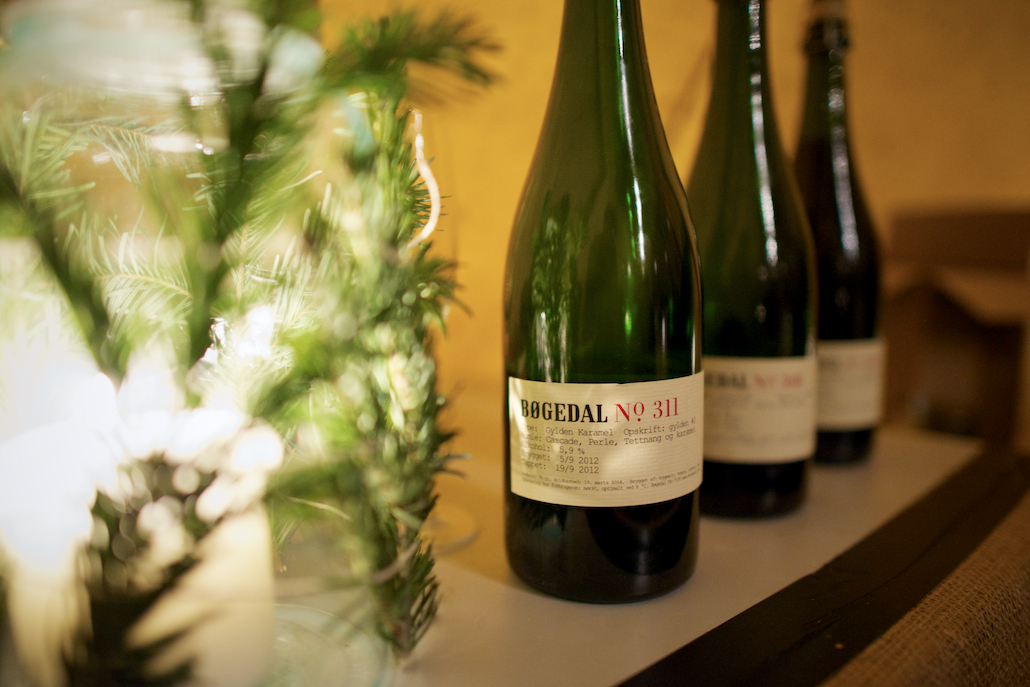