Aritayaki, a kind of Japanese pottery, finds its roots in the ancient ceramics town of Arita located on Kyushu Island in southern Japan. It was in this town, in the year 1616, that the Koreans first introduced the art of pottery to Japan. Up to today Arita still produces ceramics made by local craftsmen using the distinctive ingredient of clay made from crushed stone.

We met the designer Teruhiro Yanagihara in Osaka where his runs his studio. We were fascinated by his devotion to old artisan techniques and his way of always thinking about the roots and the origins of craftsmanship. This generous and multi-talented man is also the one who hosted our silent dinner on the rooftop of his unique gallery/workshop in central Osaka.

Inspired by the profound experience and skills of local Arita craftsmen, designer and creative director Teruhiro Yanagihara developed a complete new ceramics brand for Momota–Touen Corporation. Named after its origins, 1616 / Arita Japan products are produced in the same factories as the original Arita pottery but take a complete different design approach. 1616 / Arita Japan stands for contemporary products that can be used everyday, though made with the extraordinary workmanship, thinness and strength of original Arita ware.

Teruhiro Yanagihara, the creative director of 1616 / Arita Japan, designed the Standard series and at the same time invited Dutch designers Scholten & Baijings to develop their own line named Colour Porcelain. Both contributions throw new light on Japanese tradition, mixing Asian craftsmanship with European culture. While Teruhiro Yanagihara experiments with the clay and the usage of the pottery, Scholten & Baijings emphasize the dialogue between applied art and everyday use by means of colour and form.

The co-creative directors of the 2016/project are Japanese designer Teruhiro Yanagihara and the Dutch designers Scholten & Baijings. Both have worked with the makers of Arita previously for the successful 1616 / arita japan collections. Now, they are at the helm of this ambitious new project, driving the process of reviving Arita’s craft industry with their teams of international designers and local craft makers. Yanagihara and Scholten & Baijings have together selected a group of international designers, paired them with Arita-based pottery producers and will guide the process ahead as the designers explore the capabilities and skills of the potteries and develop new works for them to produce. Here, Teruhiro Yanagihara and Stefan Scholten of Scholten & Baijings explain their enthusiasm for the project and their plans to make it a success.

– «First, how did Scholten & Baijings become involved in the 2016/project?»
Stefan Scholten: There is a prelude to this project; the 1616 / arita japan collections which were instigated by a specialist producer from Arita, Mr. Momota of Momota Touen. The porcelain industry in the Arita region was already in a state of decline, for Mr. Momota it was a now or never situation. He came to designer Teruhiro Yanagihara first, Teruhiro then invited us to join and we each designed a series of tableware for 1616 / arita japan. The collections gained international recognition, were a success, and now Momota Touen has become a business model for other potteries in Arita. The new 2016/project owes much to Mr. Momota for his vision and the risks he has taken. 1616 / arita japan has encouraged other local potteries to collaborate with designers on new Aritaware. That is the basis of the new 2016/project.

– «Teruhiro, What is your ambition for the project and what were your reasons behind inviting Scholten & Baijings to join you as co-creative directors?»
Teruhiro Yanagihara: My hope is to give the Arita porcelain industry back the coveted status it enjoyed during the 17th and 18th centuries. Aritaware used to be a very strong export and was shipped from Japan to the West through the Dutch East India Company. In those times, designs for Aritaware were dictated by the West and Arita craftsmen responded to those demands. The quality of Aritaware hasn’t changed, it is still there. Currently, people may appreciate Aritaware as a beautiful object displayed in a museum, but they aren’t using it in their daily life. We are now in the 21st century and we need to update Aritaware accordingly. To do that, producers in Arita need to listen to what people in other countries like to use and want to buy. Scholten & Baijings are well placed to help us do that; they are celebrated product designers who can bring an outside view to Japanese tableware, just as we used to have in the old days of the Dutch East India Company.

– «Stefan, do you think an outside perspective is necessary in the revival of Arita?»
Stefan Scholten: When working with companies like Irish crystal manufacturer J. HILL’s Standard, which is part of a similarly craft-driven industry, we have come to know that designers can bring a valuable innovative approach to traditional manufacturing. Arita porcelain makers have great knowledge that has been accumulated over hundreds of years but they don’t currently have any outside impetus. Designers can suggest new typologies for porcelain tableware and they will be able to promote Aritaware to a wider audience also – eventually introducing foreign brands to commission the porcelain makers in Arita to produce their own items. For example, since the success of 1616 / arita japan, Danish brands HAY and Georg Jensen have asked Momota Touen to produce items. For the 2016/project, we have invited designers from the USA, Sweden, Germany, France, Switzerland, and many other countries, to participate. These designers will be able to spread the word about Aritaware internationally. We see this project as an inspiration for many other collaborations and the beginnings of the renaissance of Arita porcelain.’

– «What do you think the 16 international designers involved in the project will gain?»
Stefan Scholten: There are not many industries left that have 400 years of history and knowledge. This is a great attraction for the designers involved who will become immersed in the culture and tradition of this small town in Japan. There is much for the designers to explore; The porcelain-making traditions, the structure and geography of the industry and the many skills of the local makers.

– «What excites you about the industry in Arita and what are the things you will be encouraging the other designers of 2016/ to explore?»
Stefan Scholten: We are fascinated with Arita’s connection with the past but also with the possibilities for new production technologies. At the ceramic technical research laboratory in Arita they have invented a way to produce porcelain that is 10% lighter. This could bring huge advantages for restaurants. New methods of production that use CNC milling machines and injection moulding can be further exploited. We will encourage the designers to combine these new technologies with traditional handcraft processes for optimum results. The challenge in this project is in asking the crafts people to accommodate new techniques that they don’t know or have not used before. But if we are to introduce a new phase in the history of Arita porcelain, it is important to collaborate.’

– «Teruhiro, Can you explain the immediate plans for the 2016/project?»
Teruhiro Yanagihara: Most of the 16 designers have now visited Arita. They have visited 10 potteries and intensely studied the crafts being employed there. Some designers will work on producing affordable tableware for mass production and others will work on limited edition pieces that exploit special craft skills. The designers will propose their ideas in January. We will review those design proposals and decide which pottery will work with which designer. The potteries will then begin making prototypes, developing products, getting feedback from the designers and the end goal is to launch the collection of products during the Milan Salone del Mobile in 2016. Importantly, 2016/ is not just about making new Aritaware but also about creating a model that may influence other industries in Saga prefecture to follow in the same footsteps.

Teruhiro Yanagihara
Teruhiro Yanagihara was born in 1976 in Kagawa Japan. After graduating from Osaka University of Art in 1999, he started to work independently and established his own company in Osaka in 2002, since 2011 based in Kyoto.
He has been working in various fields, from interior and product design to creative direction and branding for Japanese and international clients, such as Offecct (Sw), Pallucco (It), Sergio Rossi (It), Less Is More/ LIM Group (Jp), Kimura Glass (Jp), and many others.

In 2011, TeruhiroYanagihara initiated the scheme TERUHIRO YANAGIHARA/bespoke, a label for exclusive, bespoke projects, created with the finest japanese artisans and manufacturers, that targets international collectors and galleries. He was nominated Elle Decor Young Talent of the Year 2010. He is founding member of the yearly symposium Designeast and the creative director of the KARIMOKU NEW STANDARD brand. 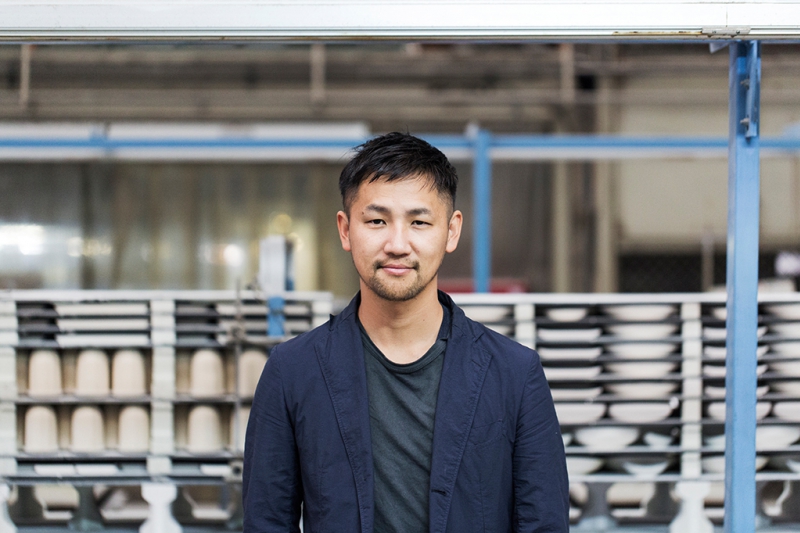