Intrigued by food habits, I've always looked for links between people around the world and I admire how food connects things. I've been trying to learn as many languages as possible to be able to communicate with everyone but I found the most international language that exists is food.

Having the chance to spend 5 weeks in Japan for a food residency was a true privilege to me, from my perspective as a designer, young chef and also as a human being.

The decision to work around cheese was taken before coming to Nara. With the long tradition of cheese making in France, I saw a very interesting link that could be created between Japanese and French take  on cheese.

I took time to visit dairy farms and meet dairy farmers in Nara to find quality local milk. It’s an environment I particularly affectionate since it reminds me of my childhood in the countryside with my grandparents, both of which were farmers. After the dairy farm, I visited a tea farm. Rain boots on, fresh air and mud, wind, rain, all of it, I was simply happy and it made me realise the importance the countryside has on defining society and cultures.

I was sitting in the library in Nara, next to Kamado restaurant, looking at the beautiful garden, staring at  the rice floating in the airand I started questioning myself about how to grow rice. I would love to see how the soy sauce I’ve been using everyday is actually made! What about sesame? I love sesame! I often see « made in Japan » on our packagings in Europe. I want to see, I want to smell, I want to hear the plants in the wind! I made a list of all the products I was curious about, the ones I wanted to sneak peak « behind the scenes ». The lady from the library started to ask me questions and ended up helping me filling up my paper full of notes and adresses. She called a few places to ask if I could visit them. i It started so fast, almost as fast as in my mind! I was so excited and I felt my heart was getting bigger, getting ready to embrace all that knowledge that was coming my way. The day after I came back to the library and we continued the research.

Visits after visits, farms after factories, shops, fields, I had accumulated a decent amount of ingredients and products picked from the source itself. Living in Nara inspired the kind of meals I wanted to prepare, and I drew a lot to put all of this information together. Since my passion for food is all about sharing, it came out very naturally that I actually wanted to make a pop-up dinner as a final project : ultra-local food, a sustainable approach, my non-local origins, and my bigger-than-the-world enthusiasm. I wanted each of the products on the plate to be a special guest, knowing why it’s here and its A to Z story. In the same way, I brought with me a pot I designed to use it in my cuisine and during the pop-up restaurant. The pot is made in Alsace (France), the region I come from and it is the result of two years of collaboration with potters. It started with an idea, a drawing, and now It’s a product that I can cook with! I know where the clay is from and I know how it’s made and by whom. It’s wonderful how much emotion an object can carry around. That’s exactly why I wanted to have it with me on the other side of the globe. It was also a great way for me to make a connexion between my approach of cooking in Europe and everything I had learned during my stay in Japan.

I also spent time drawing while in Japan and ended up with a a serie called “Let me shōyu” exhibited in Kamado restaurant in Nara the night of my pop-up restaurant.It will also be exhibited in December 2016 in Nara.

these drawings are strongly inspired by my visits in multiple factories such as a tea farm, sesame farm, tachibana farm, soy sauce factory or miso factory.

In this field I also continued a project started four years ago called « Scan Trip ». I was in the Estonian countryside for a few months with no camera, no phone, but only a scanner. To share with my friends and family I started to scan everything around me, objects, food, and leaves. I ended up with hundreds of scans and a deep obsession. After Estonia I continued to scan in Sweden, Spain and China collecting thousands of scans to finally self-publish a 350 pages book called « Scan Trip ». Once in Japan, the scanning-addiction came back and I my «Japanese Scan Trip » started. 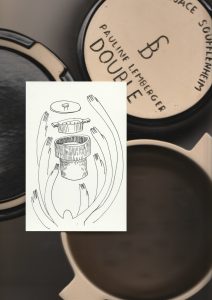 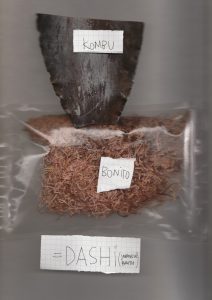 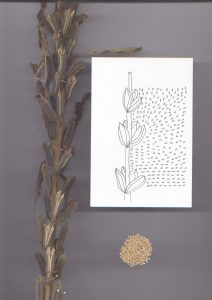 The night of the pop-up restaurant, I was surrounded by the best team I could imagine to help me to make the night special. With the precious support and help from Masayo-san, Chihiro-san, the Kamado Team and all the students from Nara university we set up the space, turn on the fire to cook the rice in the incredible-old style-and-wonderful stove present in the Kamado restaurant. I wanted this pop-up to be full of smiles and full of genuine  curiosity, with the drawings on the wall and my pots in the oven, I felt confident and very happy. Flowers and fresh sesame plants on the table, burning candles and wine glass ready to be filled. Guests started queuing  quite early in front of the restaurant. The rhythm started to accelerate in the kitchen, we spoke less and moved more, my feet were calm but in my head I could feel this magic little fire of excitation. 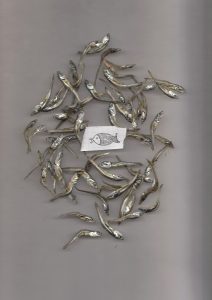 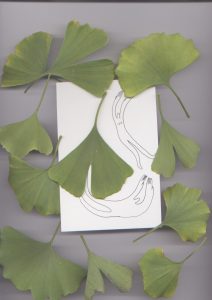 It’s with a rock of himalayan salt that I went to welcome each guest at the table, grating salt in front of them on their dish. On the plate I followed the process of making fresh cheese but instead of using cow milk I used soy milk. The texture came out really well, but it turned out to taste like a good fresh silky tofu ! What a surprise, in an other way with could say that tofu is the Japanese cheese ! The dish I was the most happy about was the Kakinoha-zushi I revisited with my french eyes. Originally from Nara, the sushi are wrapped in persimmon leaves to keep them fresh for longer. In France we don’t eat much rice, but a lot of bread. So I made a sourdough to use instead of the rice in the sushi. Topped with persimmon and blue cheese for one and dry ham, white miso-butter and comté for the other we wrapped them in the persimmon leaves I found on a tree next to the sesame farm I visited a few days earlier. Well packed and looking stunning in their green dresses, I was really glad to surprise the guests with them. The dinner ended up with a never-big-enough « thank you » speech I gave, a lot of bowing down and « arigato gosaimas ». Cooking is my favorite language, no doubt about it. 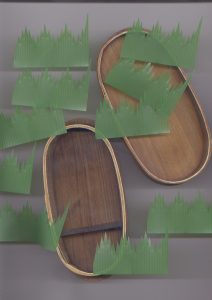 Alongside this project, I got the chance to assist the wonderful talented Masayo Funakoshi in her work throughout the region and share incredible energy with Luz, Chihiro, Ayana and the Food studio team. There’s no word to describe how thankful I am for their support and good energy that strongly contributed to make my project alive. I want to give a massive thank you to Masayo Funakoshi who gave me the opportunity to come to Japan and who was a perfect mentor. I also want to thank Nara City for their trust and help through the Nara Food Caravan project and Ishimura-san for supporting me by letting me cook in her beautiful Kamodo restaurant for the pop-up.

I see my journey in Japan like a huge dinner shared in good company, with a lot of food and saké. I might not remember it all but I keep this wonderful taste in my head. After five weeks spent here my stomach is full of inspiration, love, questions and new dreams and I need to digest it all.

Get ready though because my appetite is coming back.

In Switzerland and in the Alsacian countryside, Pauline Lemberger grew up with products from her grandparents farm, where she helped them a lot in the fields, the orchards and the garden. The feeling and sense of attachment to produce fresh and honest food has never left her. It is with these products that Pauline began to cook, alongside her family.

Pauline completed a bachelor degree in Industrial Design in ECAL, Lausanne, Switzerland. During her studies, she visited different countries and discovered many different ways of buying, cooking and eating food. Pauline completed several internships in the design world, where she lived in Shanghai, Singapore, Barcelona and Stockholm. Following  these discoveries, she retained her interest in local produce but also grew an interest in food habits. In 2015, she took part in a TV food competition, on a national television channel France2, called «Mon foodtruck à la clé» with her twin sister Marianne, during which they progressed to the finals. Following the success of the competition, the two sisters began to work together as a culinary agency named Bouchée double, helping them to lead projects around food and design in Europe and the rest of the world. 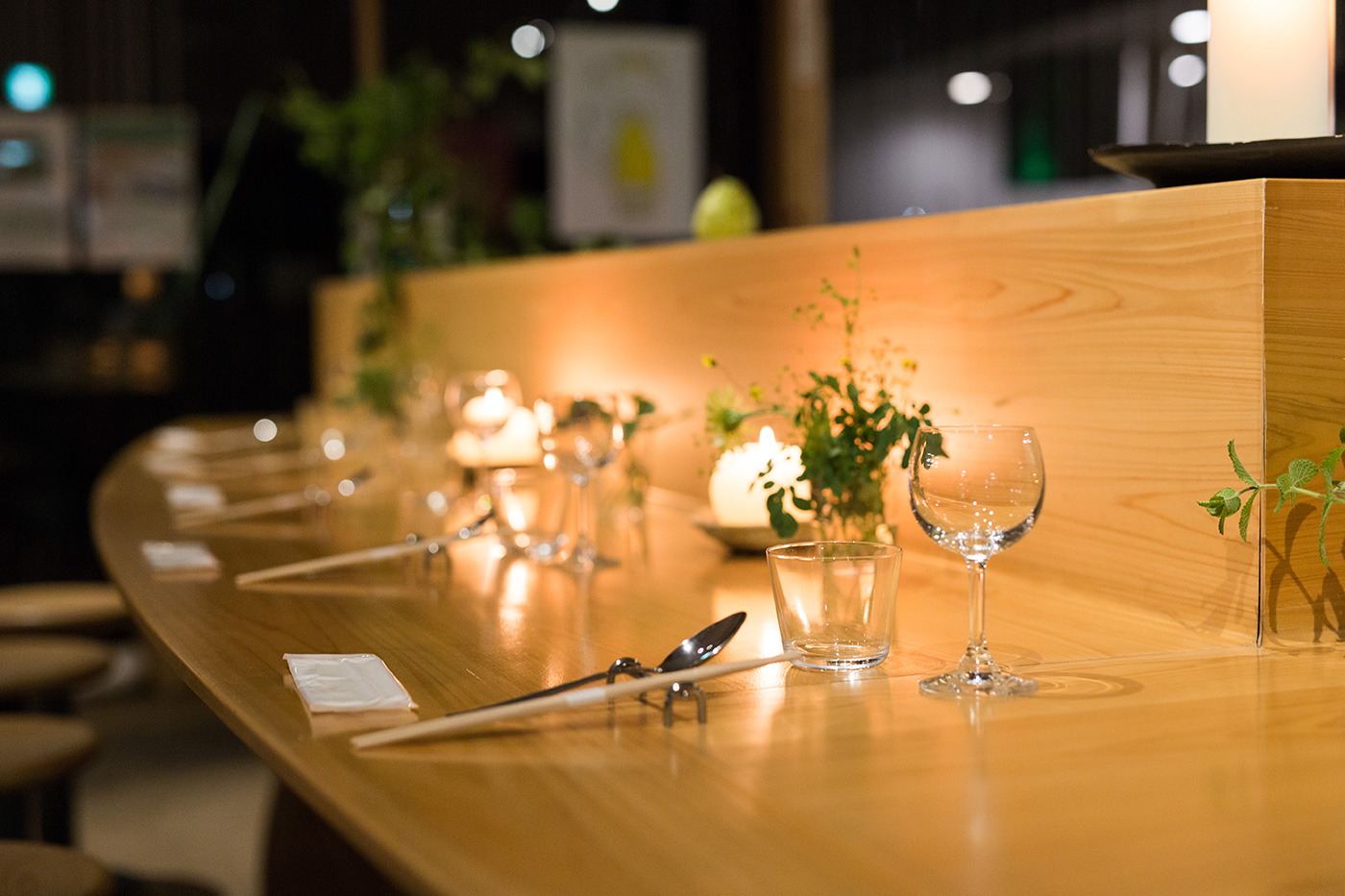 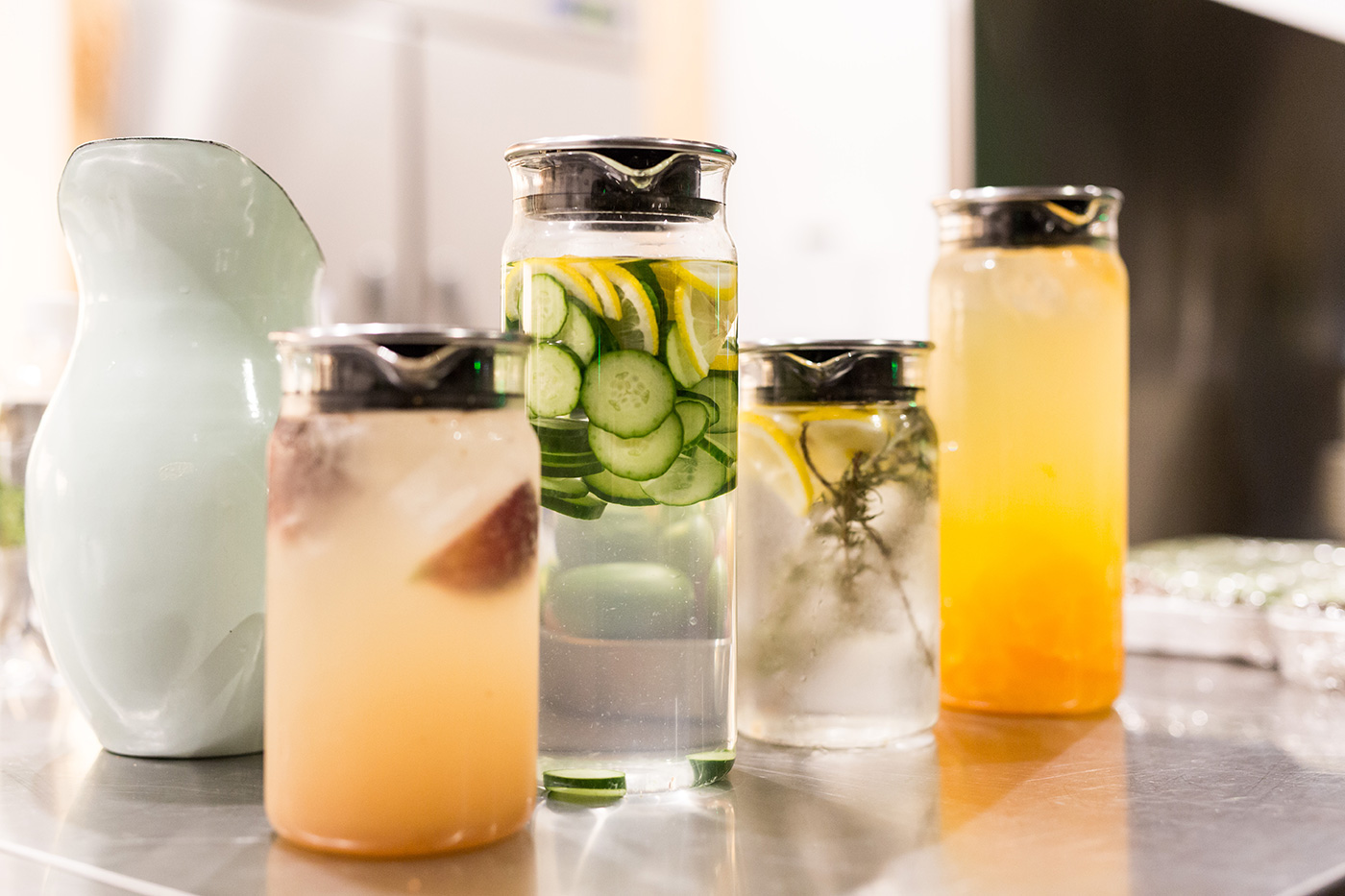 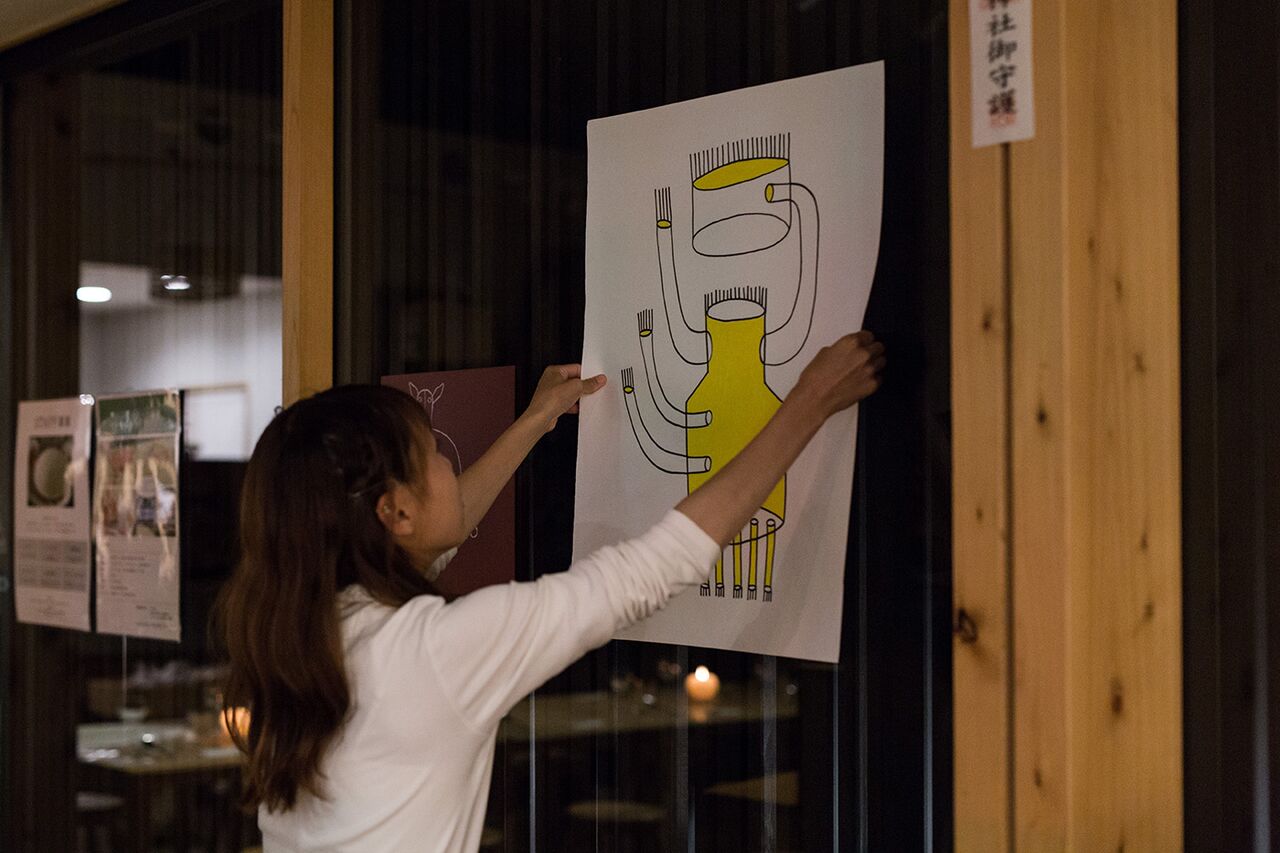 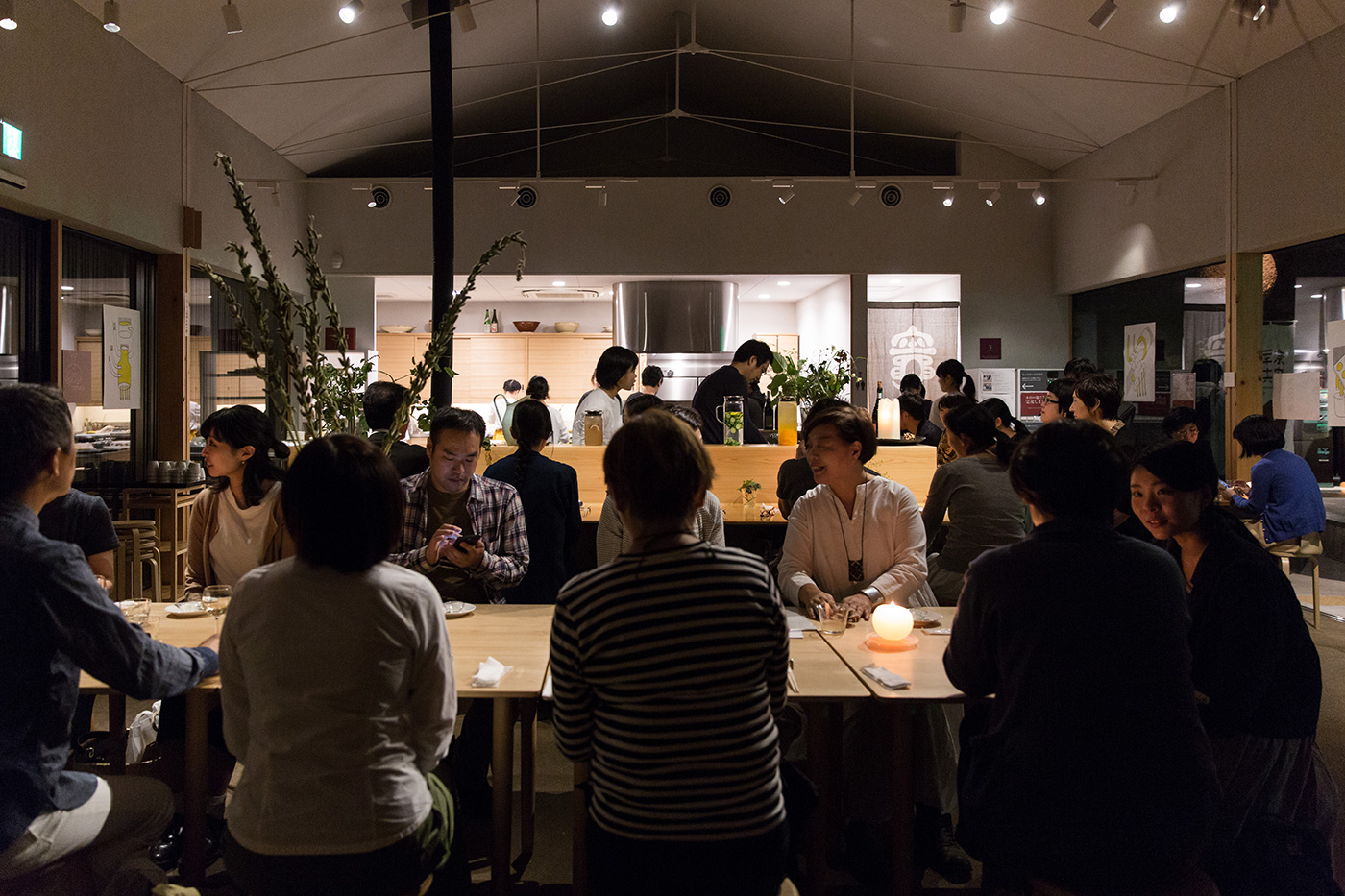