« Where you tend a rose my lad, a thistle cannot grow. » Francis Hodgson Burnett. To awaken your imagination, I’ll begin this piece with a brief recount of the story of ‘Mary Mary Quite Contrary’ in Burnett’s 1911 children’s classic The Secret Garden. The protagonist, Mary Lennox, is a sickly, ill-tempered young orphan who is sent to the Yorkshire countryside to live with her estranged uncle, Master Craven, a reclusive hunchback who is paralyzed by grief after the loss of his wife.

Among the maze of gardens and walls of his neglected estate, Mary finds a mysterious door. Behind the door she discovers an enchanting entanglement of roses and perennials overgrown with weeds. She befriends the neighbour boy, Dickon, and together they begin to weed and tend the garden every day. Gradually her character begins to transform; her cheeks become rosy, her frail figure begins to gain strength and she is filled with a new energy.

Not only does Mary discover the Secret Garden, but she also discovers her crippled cousin Colin who’s been bedridden for years and hidden away by Master Craven in one of the many bedrooms at the manor. Everyone at the manor believes that he has an incurable disease and will never be able to walk. Mary is convinced that the Secret Garden will help him as it helped her, so one day Mary and Dickon wheel him cautiously out to the garden in his wheelchair. He is instantly filled with joy at the site of it. He insists that he must go there every day and spends the days observing the life in the garden and engaging with the soil, the plants and the creatures. One day he tries to walk, and with some practice he is up and running like any other little boy his age.

Eventually, Master Craven finds them in the garden and is elated at the site of his healthy boy and the blossoming garden. He too becomes rejuvenated and his spell of grief is broken. In the end, the garden helps these grieving, crippled, and ailing individuals to find well-being within its walls. The garden, Mary, Colin, and Master Craven had all been suffering from the consequences of abandonment. When they begin to tend the garden, the garden tends them in return. This is the symbiotic relation between people and plants. The nurturing and maintenance of a plant from seed to flower can have a therapeutic effect. When engaged in the garden with the natural elements, one can temporarily forget physical or emotional pain, the past, grief and disease.

This message that prevails in Burnett´s 1911 novel is the premise of Ecotherapy, which has become a concept in our modern world. Ecotherapy takes an alternative approach to healing, advocating activities in nature as a key to physical and mental wellbeing. In the case of gardening, ecotherapy is referred to as Horticulture Therapy. In the UK, Ecotherapy and Horticulture Therapy are recognized as complementary therapies and are prescribed to patients suffering from all sorts of physical and mental challenges. Ecotherapy is especially beneficial to urban dwellers, who do not have much access to nature. Urban community gardens and farms are ideal places for horticulture therapy sessions and are becoming more prevalent.

One example is Sydenham Garden in South East London, which offers therapy sessions for those suffering from mental and physical health issues, as well as adults with dementia. Tim Brogden, originally from London, worked as a volunteer at Sydenham Garden for one and a half year. He worked with asylum seekers, people suffering from various mental health disorders such as anxiety, isolation, depression and post-traumatic stress, as well as those with dementia. The therapy sessions included various gardening jobs. Some would prefer small jobs such as sowing seeds and pricking out seedlings. Others, especially those who suffered from post-traumatic stress, benefited from heavy physical labour. In his time working at Sydenham gardens, Tim said that he could really see the difference from when participants would first arrive to after they had been attending the therapy sessions regularly. In the beginning, Tim shares, “for many the notion of getting up, going out and getting somewhere was so alien”. The participants didn’t interact with each other, but after a while they would open up.

One of the main benefits of horticulture therapy is the social aspect of getting out and doing something productive together with others which gives the participants a sense of pride and accomplishment.

The Sensory Garden at Losæter

When Tim moved to Norway in 2015 he was inspired to take his experience from Sydenham garden with him. When he met Andreas, Oslo’s own City Farmer, at Losæter he thought it was the perfect place to spread the seeds of horticulture therapy and start a project. He imagined a Sensory Garden with fragrant, tasteful and visually beautiful plants and flowers that would appeal to all the senses, helping to awake memories. Together with Andreas he pitched the idea to Villa Enerhaugen, a center for younger patients with dementia. They agreed to the proposal on the condition that Tim would do the gardening sessions in Norwegian, a language he did not master at the time. Since the spring of 2017 a group of five men from Villa Enerhaugen have been meeting every Tuesday and have built up a garden from scratch; from building dry stone walls and wheelbarrowing soil, to sowing seeds, pricking and planting out seedlings. Tim spends otherwise most of his days during the growing season at Losæter, as he has not yet found other work in Norway since his migration, and though everything he has done in the garden is voluntary he stresses to me that – “it is not charity!”- they are doing something together. It’s been a beautiful exchange and he has learned a lot of Norwegian, so for him it has been an integration garden.

For the 2018 growing season, the Sensory Garden received funding from the Oslo Municipality Nursing Administration (Sykehjemsetaten), which enabled them to purchase better equipment, more plants, food provisions for breaks, and a small salary for Tim. In September 2018, Tim won the Dementia Prize from the National Association for Public Health for his collaboration with Villa Enerhaugen in the Sensory Garden. The success of this project has inspired Tim to initiate more groups at Losæter to reap the benefits of horticulture therapy for the 2019 season.

The Sensory Garden is a wonderful example of what can happen when urban developers and municipalities share space and funding for community growing projects. Such projects do not only grow vegetables, herbs and flowers, but also healthy communities and bridges between diverse social groups. Losæter is one of these spaces, and the secret is starting to spread as more people are intrigued by the various events that take place there. All urban dwellers, in sickness and in health, can benefit from digging in the soil. The Sensory Garden is just one of the projects that are active at Losæter. There are many other ways to get involved in the growing that happens there, whether by attending an open workday, course, or joining the open communal dinners that are hosted every Wednesday during the harvest season. Though it may be hard to find if you haven’t been there before, just follow the two towers sticking out from the motorway between Middelalderparken and Sørenga. The “doors” are always open.

Number one health tip from the author: My ultimate health recipe is a mix of gardening, walks in the woods, creating music, doing yoga and eating well.

This is an article from Hauste Magazine. 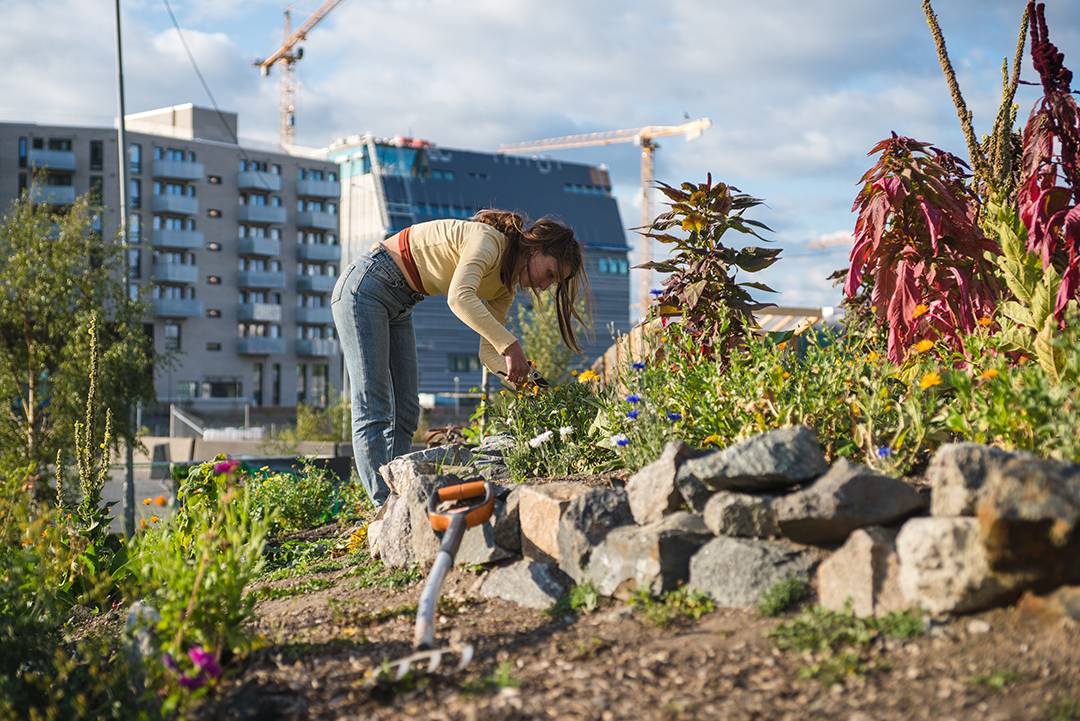 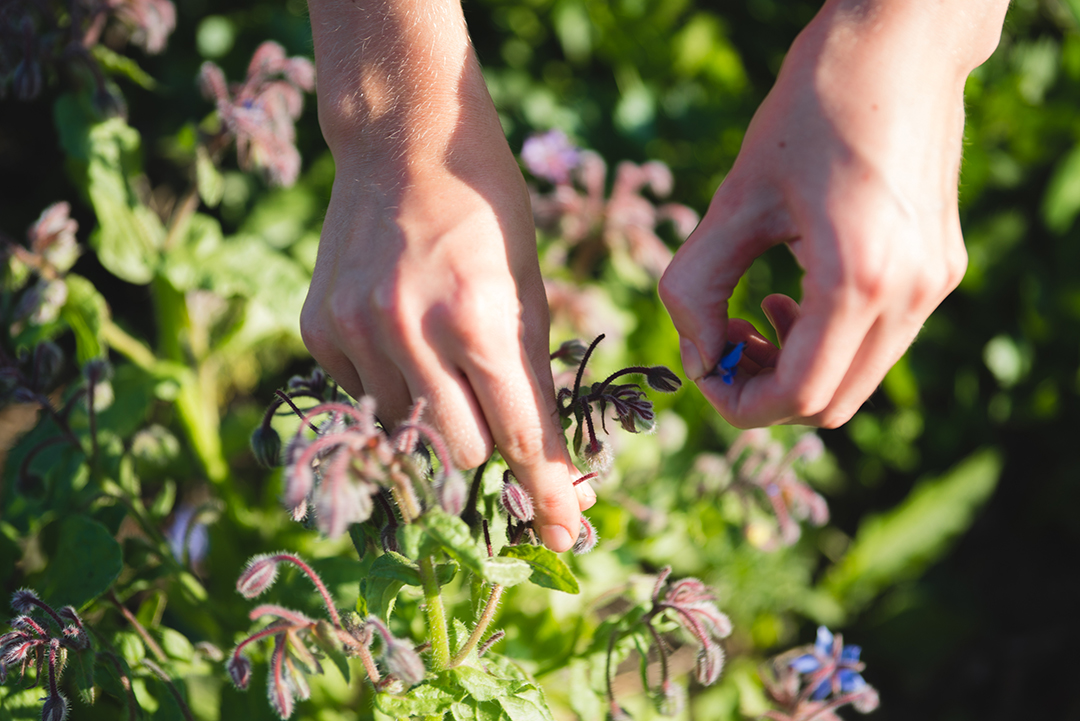 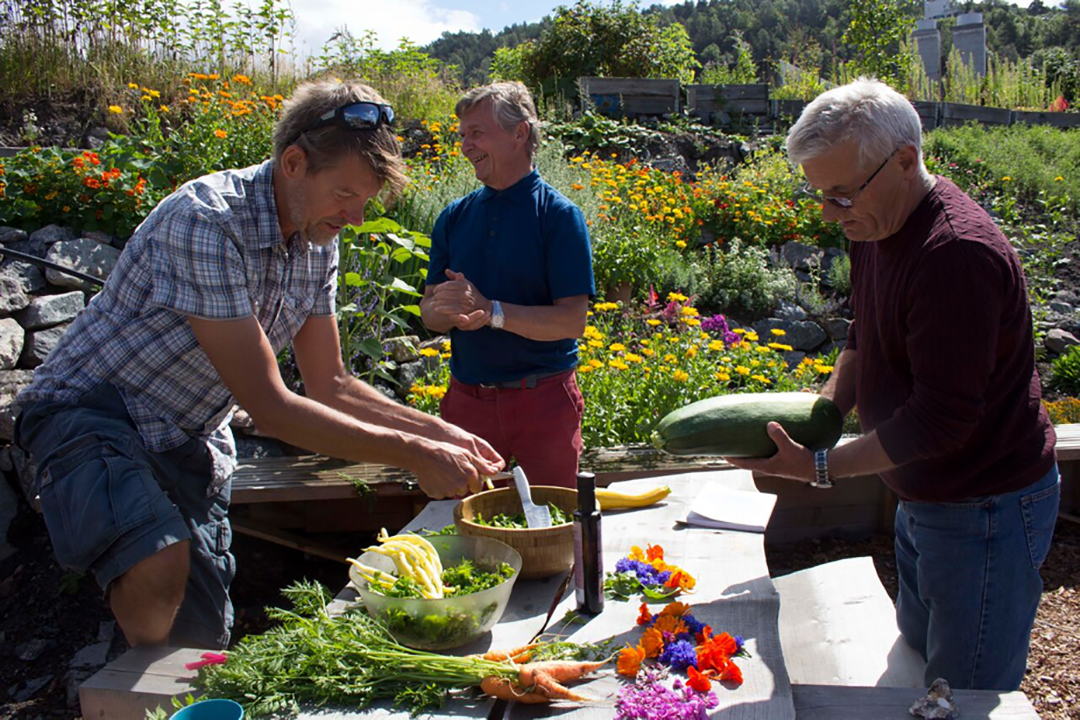