Flo og Fjære is a widely used term that describes the growth and nature around the coastline of Norway, and it was this concept that set the scene for Food Studio's seventh event held in the middle of May.

Actually, spring had barely broken, but the shoreline and forests of Håøya, the largest island of the Oslo Fjord, proved to be teeming with fresh fish, shellfish and wild herbs. Over twenty guests received a mysterious note a week before the event telling them to meet at Oslo’s Aker Brygge where a boat would take them to a secret location. Later on they were told to dress appropriately for the weather – which for Oslo in May meant wellies and rain gear as well as shorts and sunscreen. Awaiting the guests’ arrival on the other side at Håøya, the Food Studio team was equally anxious and excited after a week of preparation, getting to know both the island and its guardians. At Aker Brygge, the guests were met by the ever-smiling Talor Browne from Tim Wendelboe, ready to serve them a cup of coffee – a Kenyan coffee from the Tekangu Co-operative that was filled with intense and bright flavours of berries and flowers. With all of the guests safely onboard, the ferry left and carried them through the stunning scenery of the fjords of Oslo. 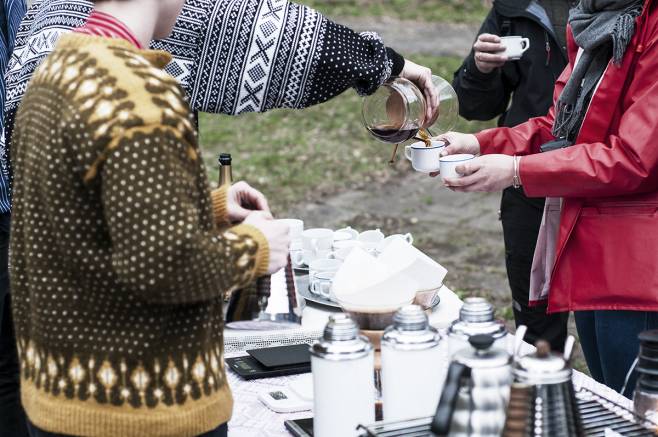 As the guests arrived at Håøya they were escorted from the dock to a bay some hundred meters away. Here awaited both the crew and our very special host for the evening, Kjartan Fønstelien. Kjartan, an archaeologist by profession, had spent much time on the island in his youth and knew it like the back of his hand. This evening he would guide us through the area’s unusual history as well as give us an insight into its vast variety of edible flora and fauna, available just a short boat trip from the hustle and bustle of metropolitan Oslo.

We were soon served our first meal, a so-called fiskemølje, a traditional Norwegian dish of catch of the day boiled in seawater, vinegar, bay leaves, salt and pepper. The big surprise of this dish was that it was poured directly onto the coastal rocks for us to eat from, making it a sort of smörgåsbord of the freshest cod, flounder and mussels I had ever tasted. Struck by curiosity, we approached as Kjartan explained that the mussels used were picked just ten metres from where we were standing only twenty minutes ago. As we started eagerly tucking into this rustic feast from the sea, one could hear the pleasant hum of satisfaction and laughter building. Some time later, our chef for the evening, Magnus Morveto, joined us by the fire. Magnus’ background is from fine dining, including a stint at Heston Blumenthal’s Fat Duck, and he now heads the kitchen at Oslo’s Kantina Westerdals with an experimental but honest approach to food. He explained that we would split up into two groups – one would go with him to pick winkles and wild herbs around the island, while the other would go on a historical trip around the island with Kjartan.

As we gathered wild nettles, chives, dandelion, viola and even oregano – whose seeds had apparently blown ashore from passing trading ships in times gone by – we got a clearer picture of what we were going to be eating at that evening’s dinner table.

After a walk around the island, we gathered by the main house on the island, a former grenade factory where women who had had relationships with German soldiers during the Second World War were sent to work. Outside, we were served another special coffee brewed on the Chemex by the Tim Wendelboe team, this time from their own lot in Finca Tamana in Colombia, a cooperative they have been working with to help improve their coffee production processes. Accompanied by some warming blankets and glasses of crisp Crémant sparkling wine, it was an excellent opportunity to get to know the other guests. 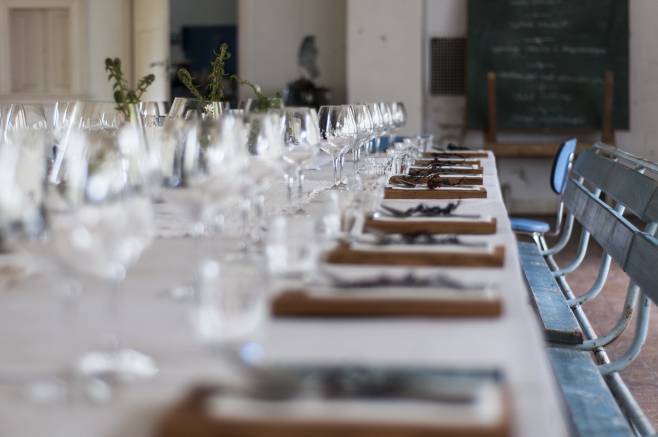 Moving on into the dining room, we were handed traditional Norwegian lusekofter (knitted jumpers) and warm slippers, and we all seemed to feel perfectly at home as the first dish of the eight course dinner was brought to the table. This was three variations on mussels: mussels in birch sap aspic with wood sorrel, smoked mussels with the first wild oregano shoots of spring, and pickled mussels. Served with a citrusy wheat beer brewed with coriander seeds and orange peel from Denmark’s Bøgedal microbrewery, it was an ideal and refreshing start to a meal full of surprises. 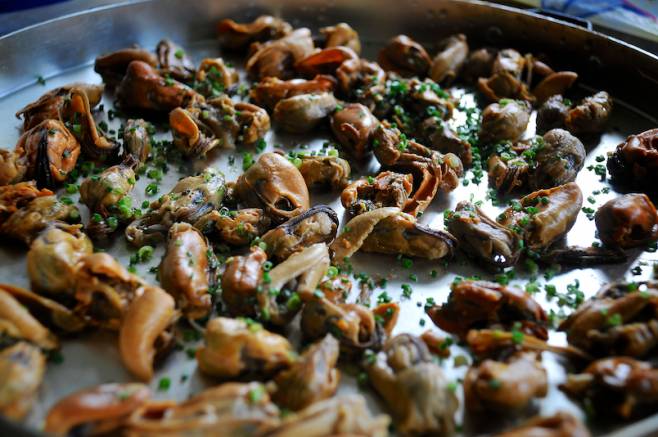 Next up was perhaps the strangest and most interesting course of the evening – a slip sole ceviche prepared with the help of some ants from a nearby ant-hill. The ants secrete formic acid, which ‘cooks’ the fish the same way as citrus juice does in a traditional ceviche. It gave the fish a slight umami taste and was accompanied by an aromatic French apple cider – Mayley Cidre Ancestrale 2012. 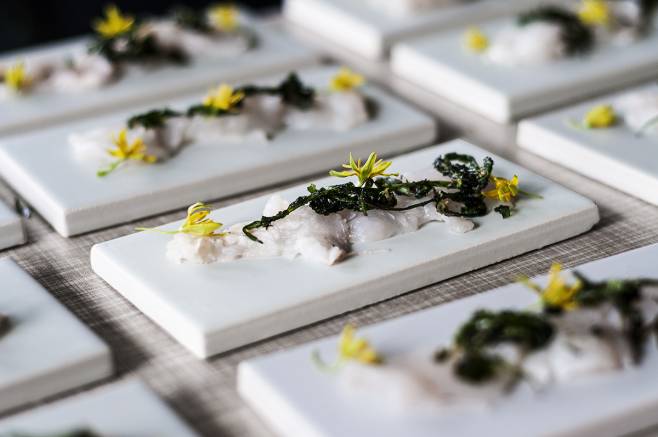 This was followed by a delicious dish of winkles in nettle stock and pan-roast brill. 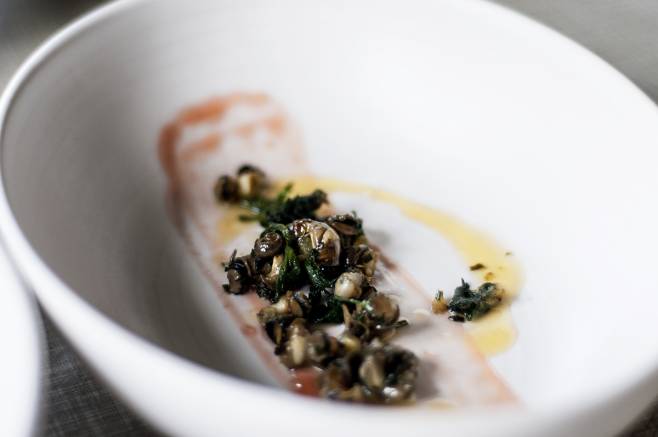 We finished the main courses with a dish of cured roe deer. Earlier on in the day, we also had the pleasure of learning how to extract birch sap – a sweet and mild liquid that tastes slightly of coconut – from the many birch trees around the island. In old times it was used as a sort of vitamin supplement for both humans and animals at a time when the season little else to offer. This turned out to be the basis for the last dish on the table, a granita of birch sap. Its crystal clearness and sweet but subtle taste was the perfect end to a long and adventurous meal. 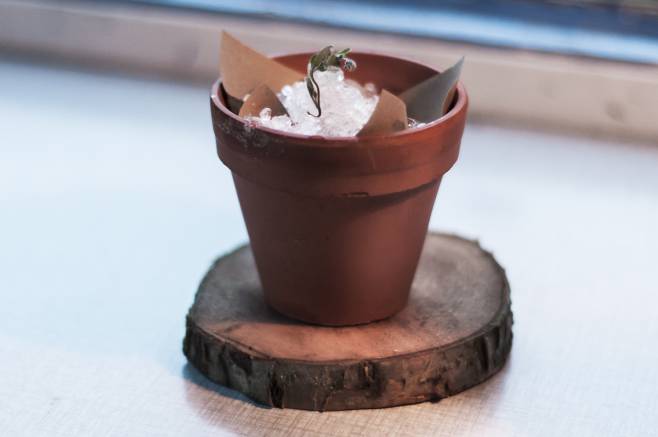 This was a meal as entertaining as fascinating – what more could the forest and shore offer? As it started to darken outside, we found ourselves immersed in conversations around the table and completely lost track of time. As the clock approached ten, we hurried to catch the last boat from the island along with a traditional dram on the way, this time a saffron-infused gin. The euphoric mood carried on for journey to the nearby harbour in Drøbak, and we gazed back at the island, which was by then shrouded with thick fog.

One could sense that all of us were amazed by the gathering and exploration we had just experienced, only an hour outside of Oslo city. Many of us were already planning on going back to pick what the sea and forest could offer, whether it be beach onions, mushrooms, berries, seaweed, snails or fish. Just knowing that this wonderful local bounty was there at all was a very pleasant thought to end this very special evening with. 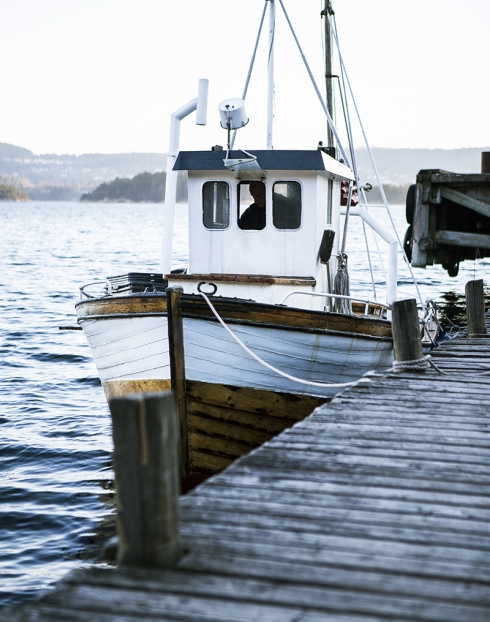 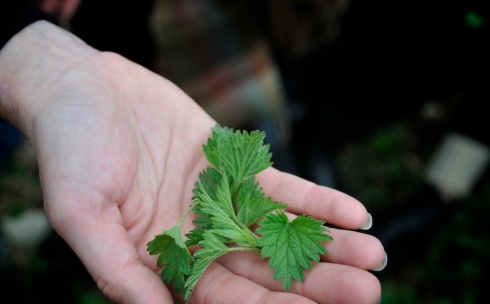 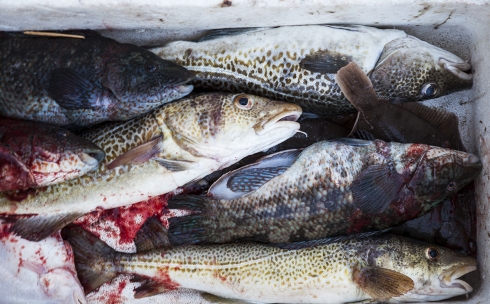 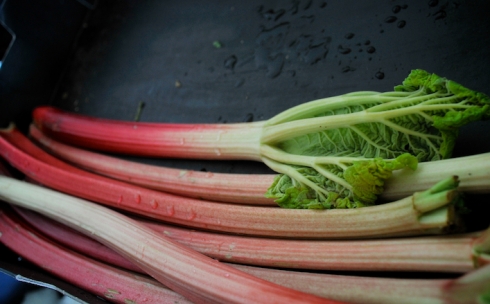