Well-seated in a 120 years old, large, wooden building at Bygdøy - originally a museum for agricultural tools - are over a hundred hungry guests. They are here to experience a dinner prepared by cooks from three of Oslo's best restaurants; Smalhans, Fru K and Kolonihagen.

The produce used this evening is extremely local – picked only a stone’s throw away from here. Accompanying the meal is the etherial voice of Susanna K. Wallumrød, who is interpreting the poems of Gunvor Hofmo. Intrigued, are you not?

The four groups returned from their trips, and people were invited to get seated in the heritage building Gamle Landbruk, a large wooden building from 1894 with a spacious interior, originally a museum for agricultural tools, now a hall owned by Norsk Folkemuseum.

As over hundred guests had leisurely found their places at the long wooden tables, and had a chance to have a chat with old and new aquaintances – Idun Leinaas, project manager of ØKOSLO and Cecilie Dawes, founder of Food Studio, greeted the crowd. They wished everybody a warm welcome to ”Bygdefest på Bygdøy”, and informed that, being a part of the Oslo eco-week ØKOSLO and with Food Studio’s dedication to good and honest food, everything that would be served was of course organic from start to finish. They also revealed that music would not only be part of the evening – it would be an essential part of the meal, to be considered as separate courses to be savoured with the ears, eyes and soul instead of with the mouth.

The chefs for the evening were from three of the best restaurants in Oslo – Smalhans, The Thief and Kolonihagen – which all have in common their focus on local, organic food. They had put up a provisional kitchen outside the building, with a very large closed cast iron grill as its most prominent feature. The chefs themselves had a couple days before harvested most of the ingredients from a local vegetable garden on Bygdøy, making the ingredients not only organic, but remarkably fresh and local.

It did not take long before the first course was enchanting every nose in the room, with its smoked aroma revealing that the food had been grilled in a high quality smoking grill. All the dishes were ingeniously served as platters with enough for eight people on them, to be passed down the table. Although the scent had been a smoky grilled one, it was not your standard steak which presented itself on the plate, but rather a fabulous roasted celeriac, skin charred and bursting with aroma, the flesh inside with a sweet, deep root vegetable flavour. A tart yoghurt dip and long, crisp strips of celery head were fresh accompaniments to this surprising and satisfying start, in which the celeriac had left the world of vegetables and entered the flavour domain of crisp, smoked bacon.

The robust smoke aroma followed through the meal as a theme, fitting very well into the flavours one associates with a bygdefest. For the second course, however, it was not a dominant flavour, but rather just a hint. Freshly cooked mussels were passed down the table – the taste was one of the ocean, infused with fennel, a touch of smoke, and that wholesome flavour mussels have that you cannot quite put your finger on, but which makes the mussel stock so delicious to mop up with a piece of bread – and that is just what we were instructed to do, to everyone’s delight, cleaning our plates with bread which was served at the end of the course.

The sharing of food along the table, the chatting of a hundred very pleased diners and the luster of numerous living candles lighting up the nearby area but leaving the room glowing and the high ceiling magically dark. The food so far had been charmingly simple, but oustandingly executed with care and clever preparation by the talented chefs.
For the next course, the hosts announced that food would not be served, but rather Susanna K. Wallumrød’s enchanting performance of poems by Gunvor Hofmo set to music. Hofmo’s poems are tender and inspiring, and Susanna’s song was uniquely touching – being powerful and mellow at the same time. The emotional performance left many eyes watery and many minds thoughtful. The audience gave her an elated applause as a thank you for the bewitching song and play.

As everyone returned from the world Susanna had carried them into, the fourth course was brought to the tables: A colourful autumnal salad with beets, pickled pumpkin, green kale and much, much more, in a playful combination of cooked, raw, crunchy, soft, sweet, salty, rich and fresh. Again a touch of smoke lent itself well to the green kale, and the dish provided fullness of taste while only being composed of ingredients coming straight from the soil.

There was a very good vibe in the hall, people were taking delight in the very special food and the very special musical performance which both melted together into a sensation of harmony. I believe we all too rarely experience this natural fusion of an athmospheric setting, appetizing food, good company and soul-pleasing music, where everything comes together in a whole which is greater than its parts.

Course five was a very hearty dish of lamb confit, with various representatives of the cabbage and onion families; a rustic plate conjuring images of simpler times. Adding baked, roasted potatoes with mouth-watering seasoning, this course was incredibly robust, a true culimination of countryside tastes.

Susanna’s much anticipated second performance followed next. She captivated the seated crowd with another poem by Gunvor Hofmo set to beautiful piano accompaniment. Gunvor Hofmo’s poems are beautifully fragile, just as we humans are. Susannas touching interpretation of the poems was once again nothing but other-wordly.
It was time for our last course, the dessert. As a continuation of the real and rustic feel of the previous dishes, we were served scrumptious baked apples in a bowl, with roasted hazelnut garnish and delectable seasoning. On the tables were small jugs of organic Røros milk, which you could pour into the bowl, evoking childhood memories of other simple yet flawless desserts. Some at my table even had second helpings, not because they were not full, quite the contrary, but because the small, sweet apples were too good to resist.

Some guests had to leave right away, while others were tempted by the specially composed drinks served in the bar by Fuglen’s bartenders – those who did were rewarded with great-tasting concoctions to conclude this incredible evening of experiencing the world with every single sense. Those who think that an organic lifestyle means forsaking fun and pleasure could not be more wrong, and anyone who attended this evening can attest to that. Every ingredient in every course was organic and the dishes were dominated by local produce from Bygdøy harvested by the chefs before the meal. A greater richness of life is attained when one emphasizes good and honest relationships, food and experiences.

The crisp October night awaited the last guests who lingered in the hall until midnight, and candles and torches guided our way out of the great hall as some ventured home and others continued the evening out. A fulfilling, total experience had come to an end, but the knowledge, inspiration and memories will remain. 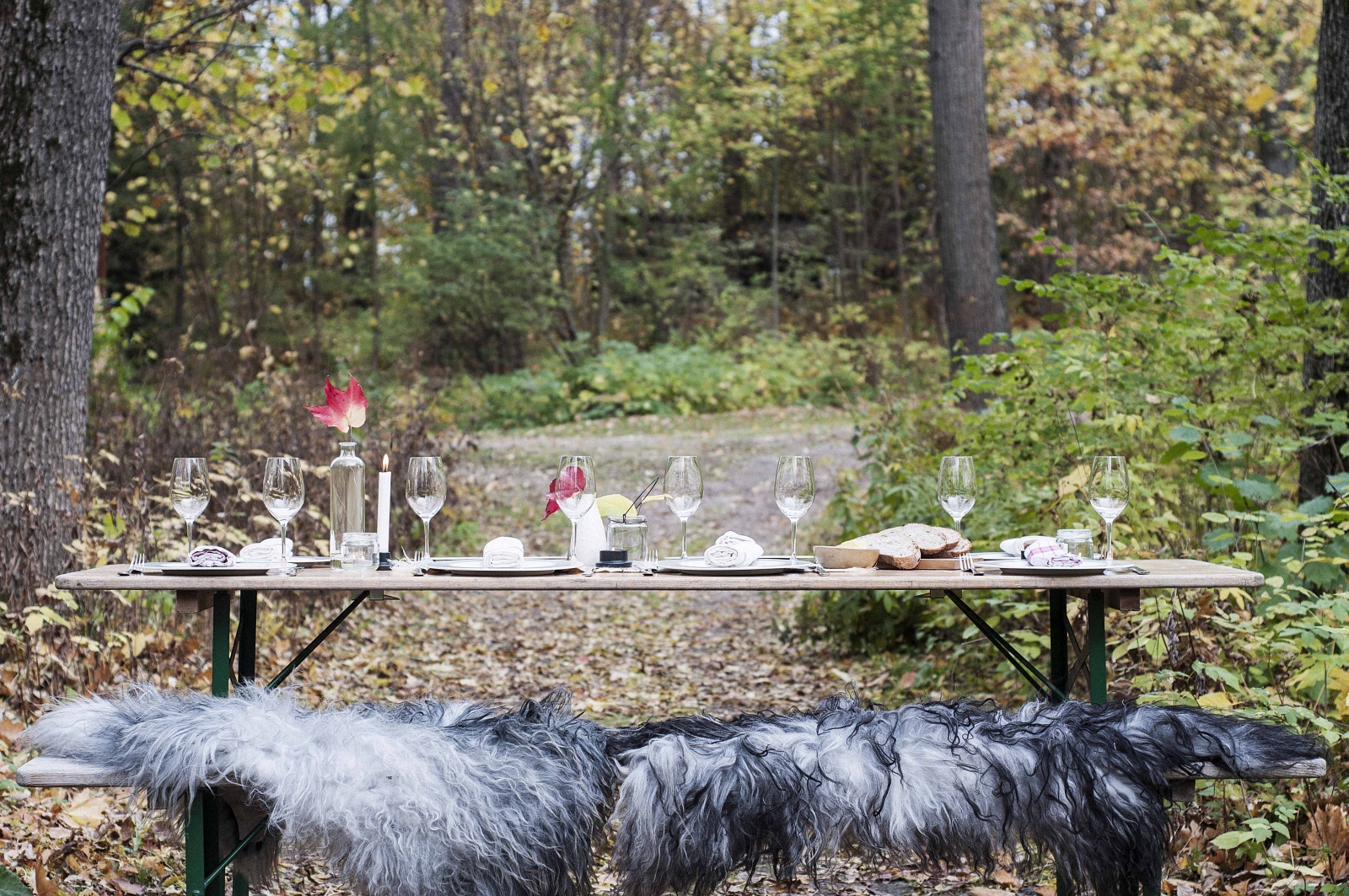 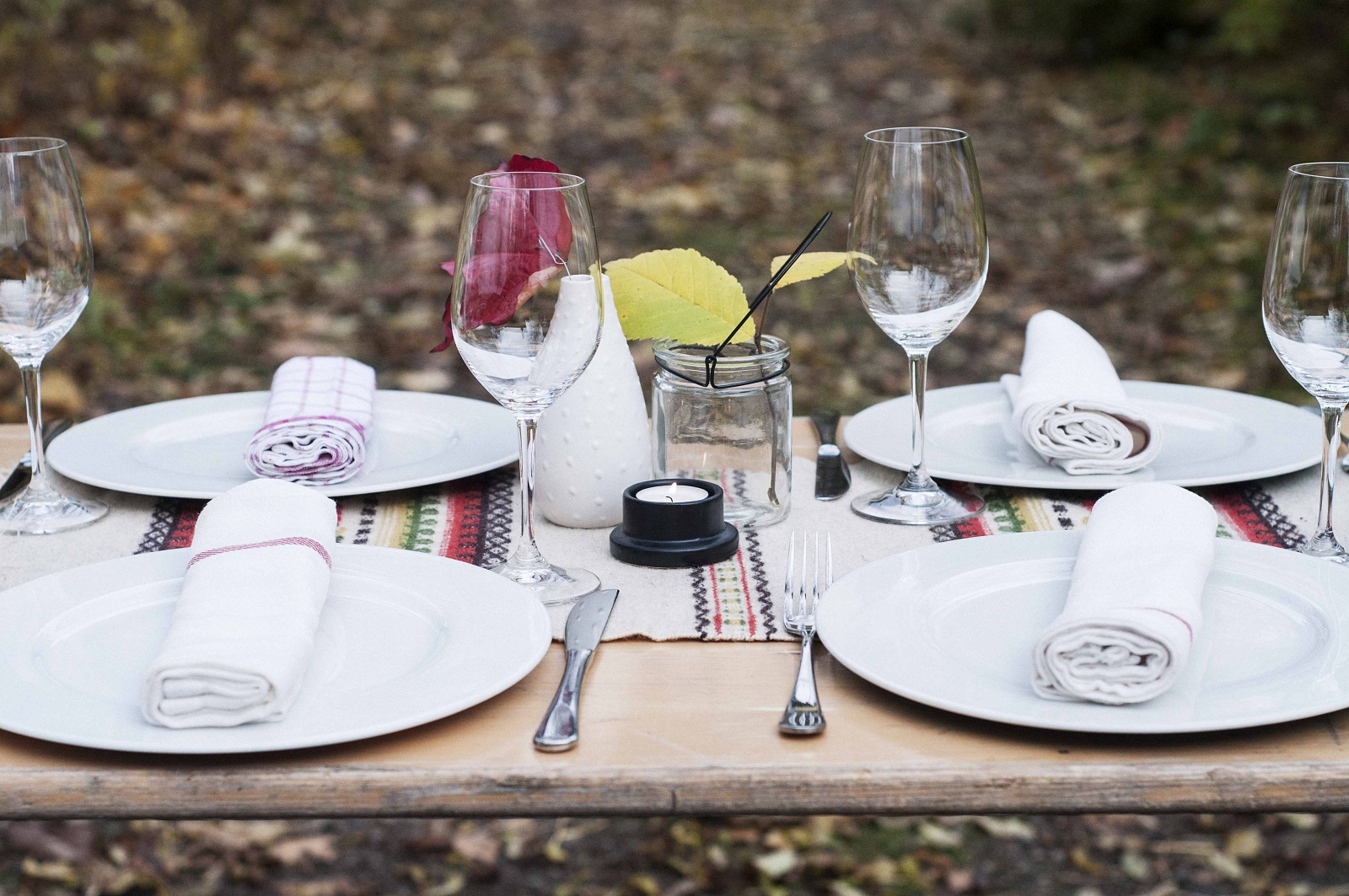 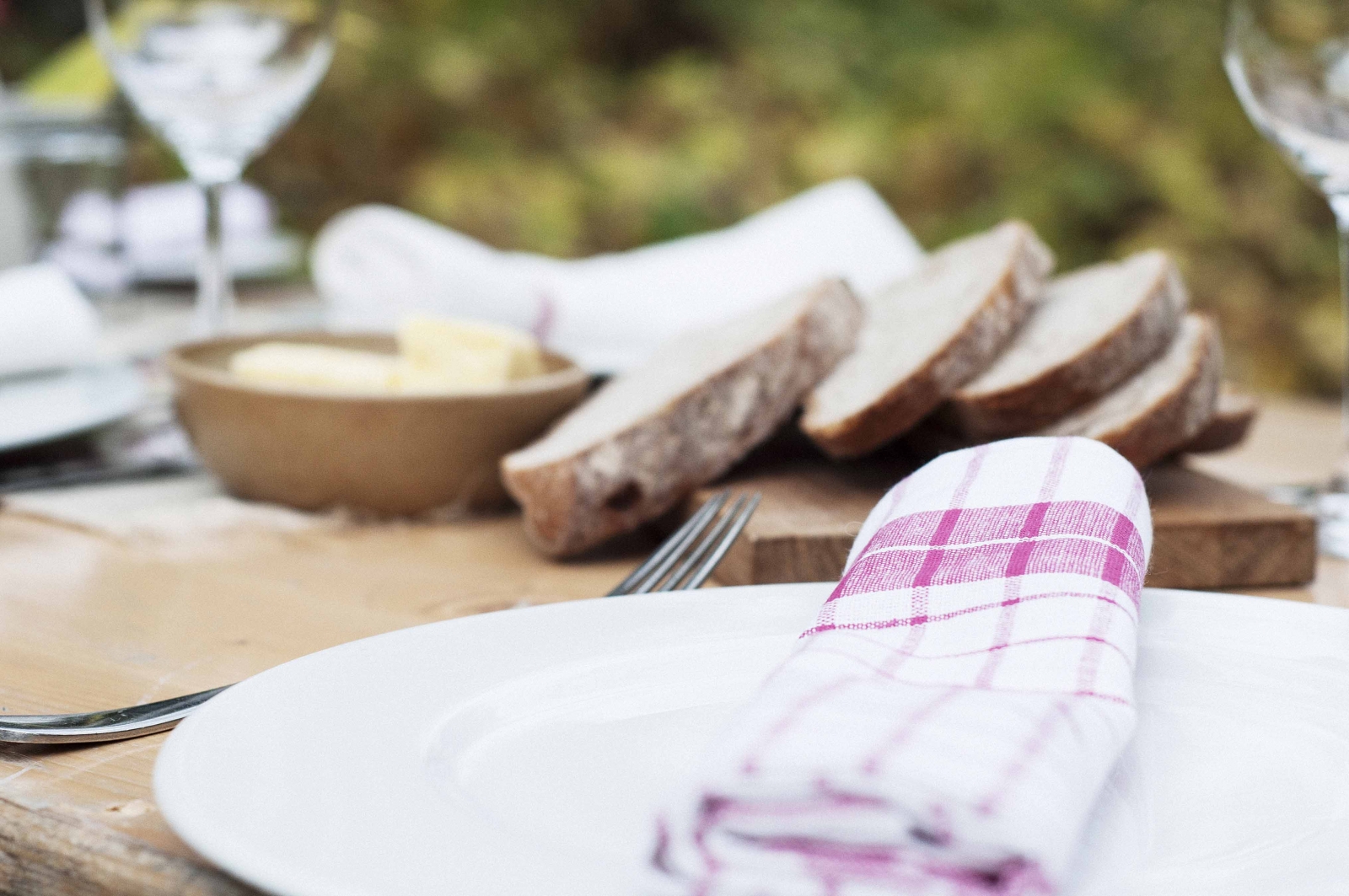 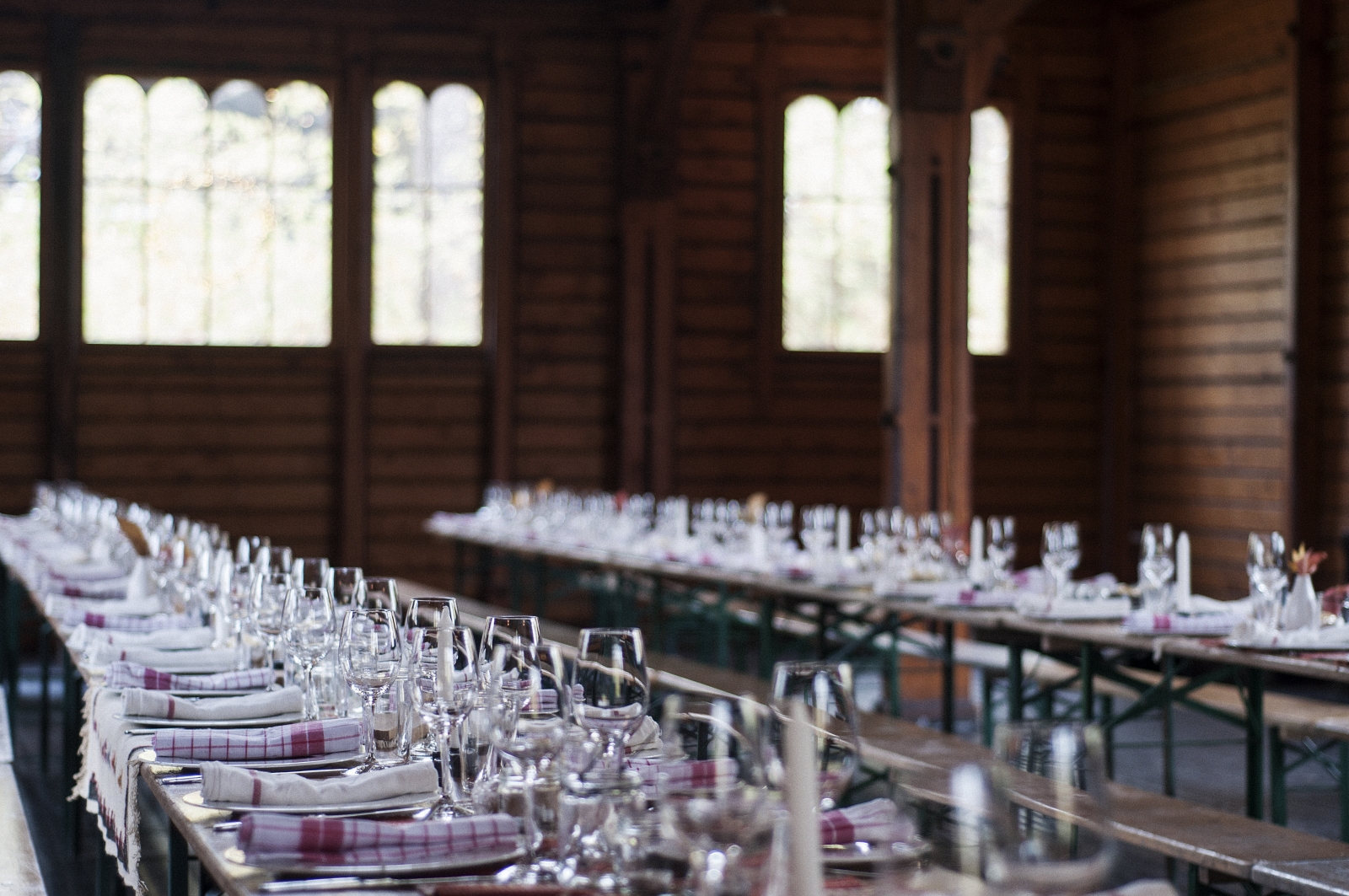 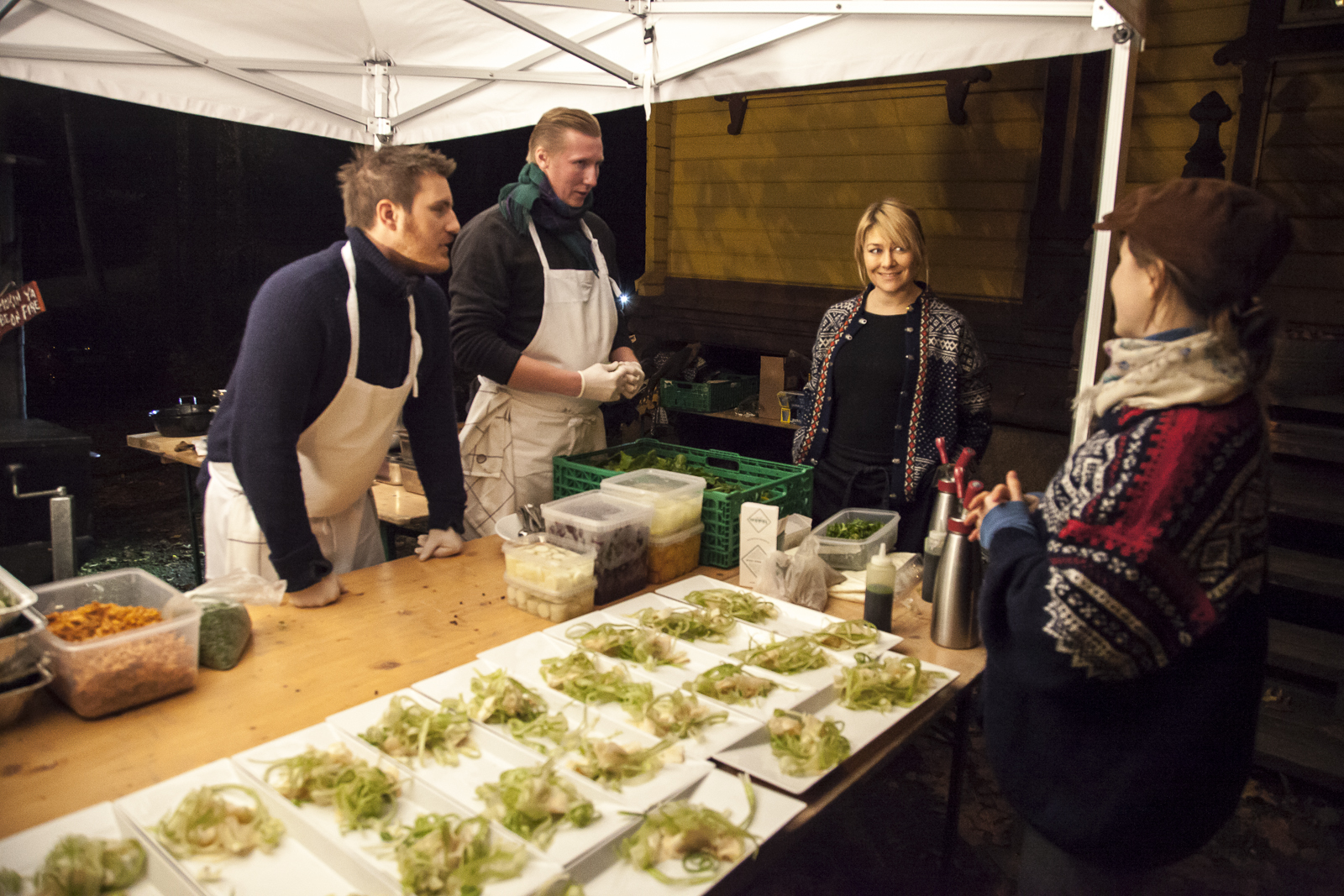 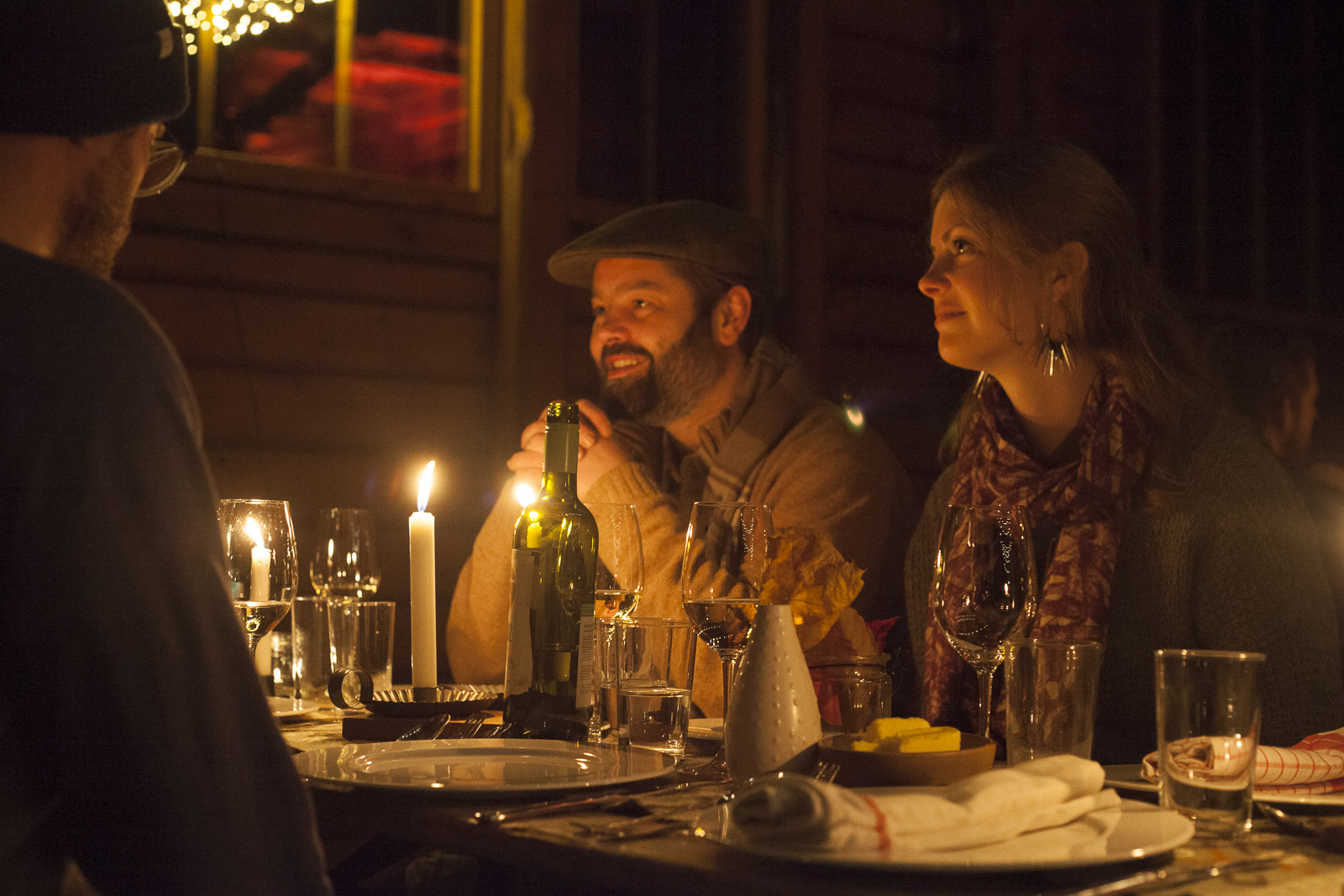 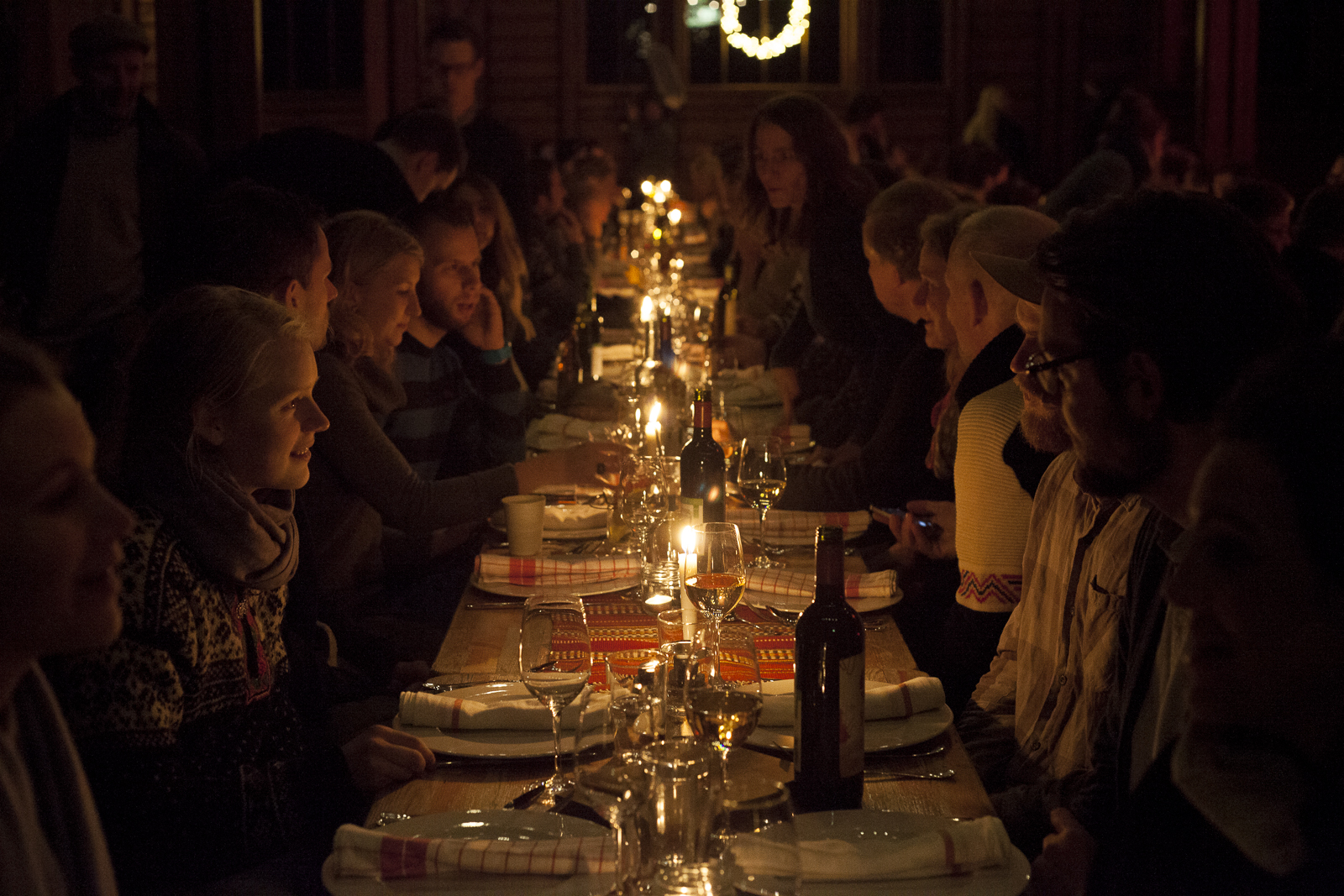