I remember imagining Tasmania, when I was a little girl, as a deserted island in the middle of the ocean. Far, very far away from my country. I thought only Tasmanian devils would inhabit this land, swirling and roaring around just like in the cartoon.

I am now living in the southern tip of Australia, just a stone throw from the mysterious island, and had a recent opportunity to cross that narrow stripe of ocean to go discover what Tasmania is really made of. My friend Cecilie Dawes was planning a trip to Melbourne and Japan to organize several Get Aways and meet inspiring like-minded people when she received a message from a certain Matt Sykes. He had read about Food Studio in the latest Monocle issue and was very interested to hear more about it.

As Matt happens to be a guide based in Tasmania, he genuinely offered to take us on a one-week trip around the island to explore some of the native edible plants as well as the current gastronomic heritage from Europe. He didn’t have to say much more to convince us to pack our backpacks with woolen jackets and hiking boots and jump on a plane.

Matt welcomes us in Hobart with a handful of grape-sized berries shaped as tiny pepper bells of a deep and vibrant purple colour called Apple berry (Billardiera Lonfiflora). The air feels bright and crisp as we drive onto the bridge that connects the eastern and western shores of the city. We won’t stay much in Hobart, but Matt insists that we need to taste « the best sushis out of Japan » and so we head to the Farmer’s Gate Market and line at Masaaki Koyama’s small stand. It’s packed with fresh and appetizing inaris, sushis and makis but there’s also the made-to-order option where you just ask for the chef’s recommendation. The charismatic and smiling Masaaki suggests a raw Yellowfin tuna and promptly assembles it with a bunch of beautiful ingredients – soft round rice, beetroot and daikon angel hair, creamy avocado, freshly grated wasabi root, Sansho pepper and slightly bitter green shiso – into a plump maki. This Japanese mise-en-bouche seems to be a good omen for the rest of the trip.

We spend the night in a shack on one of the Storm Bay’s beaches. It’s the end of February, summer is slowly fading away but a dip in the iced cold ocean seems very tempting for Matt and his Tasmanian girlfriend Jo who are diving head first while I’m carefully stepping in, a toe at a time . Before gathering around the fire for diner, we nibble on the salty and crunchy succulent-like leaves of the Seaberry Saltbush (Rhagodia Candolleana) that grows all over the place. We also get to try the odd but delicious Pigface Fruits (Carpobrotus Glaucescent) that has a gel-like texture and a flavour half way between a guava fruit, a kiwi and a stewed apple generously seasoned with salt. We finish off the day on a sweet note as Matt had made a little jelly out of the berries from the Coast Beard-heath (Leucopogon parviflorus). It’s another native shrub that grows white pearl-like berries, tangy and crisp with a subtle jasmine aroma.

We spend the next day walking around the Dove Lake sitting at the foot of the Cradle Mountain. In a matter of a couple hours, we find ourselves walking through a vast array of landscapes and atmospheres, jumping from a natural Japanese zen garden to a tropical rainforest passing through bushes and emerald creeks. Leaving Cradle Mountain behind us, we keep driving up north to reach the small town of Latrobe where we are to stay at Jo’s parents house for a couple nights. Marc and Sandra have build their house twenty years ago, using recycled wood and their own hand –actually feet- pressed bricks of mud and straw. Their place feels incredibly homey and we spend a few days foraging around, picking hazelnuts and lovage from the backyards, looking for pipi shells or platypus along the rivers and chatting about how much Tasmanian people usually care about their local products and their food in general. Formed as a landscape architect, Matt is very fond of the land and all of the stories and traditions lying behind it. He has created the platform LandTalk where he releases short films, interviews and articles and organizes events for connecting land knowledge, respectful trails and the people’s curiosity towards aboriginal culture. As we wonder about the Tasmanian aboriginal presence since we can hardly witness any sign of it at first glance, Matt takes us to Launceston to meet Clyde Mansell, a member of the Aboriginal Land Council who strives to keep the aboriginal spirit and culture alive and fitted to the modern life in Tasmania. It appears clearly that the knowledge and respect toward to the land developed by aboriginal communities over thousands of years of living in Tasmania and in the main land Australia is an invaluable tool for the land-management. Only to mention for exemple the “cool burning” technique used to prevent wildfires and regenerate the flora, attracting back the fauna with plenty of new green shots.

We then head to the Eastern coast of the island for a couple nights of camping and hiking through the Freycinet National Park. We make a first stop at Isaac’s Point on the Friendly Beaches for a spectacular sunset over the Saltwater Laguna, situated roughly one hour walk from our camp base. The soft white sand is studded with glowing Bluebottle jellyfish, the game being not to step on them while staring at the sand dunes and the wallabies grazing around. The chilly wind and the perfectly outlined milky way above our heads complete the picture as we walk back to the tents for a well deserved sleep.

The day after, we purchase some oysters and mussels raised naturally in the bay by a family-owned company and we begin the journey through the park. We forage some samphire (Crithmum maritimum), Neptune’s Necklace (Hormosira banksii) and Sea lettuce (Ulva lactuca) on the way as a side for the oysters, and we snack on them all after a swim in the crystal clear waters of the bay. Fuelled up for the last part of the trail, we wrap ourselves in our scarves and enjoy the quiet pace of the bush punctuated by Matt’s anecdotes about the local flora.

We eventually reach the beautiful Wineglass bay – whose romantic name ironically recalls the darker past of the place, when the glass-shape bay was used a whalers spot and got all dyed red from the blood of the mammals. Another reminder of it is the massive whale skeleton standing near the rustic camping area, where I discover that a single whale vertebra weights probably a third of my own weight. We almost skip dinner when the small camping-gaz that we use to cook our meals cowardly fails us in the middle of the mussels steaming process. After an epic struggle and a absolute team collaboration between the three of us, we ended up enjoying the best mussels we had in a while, large and saline, tasting like they’re just caught out of the ocean. We share the camping area with a couple of other visitors and a gang of hungry possums. They look pretty innocent at first sight but they won’t hesitate to dig into your tent if what you hide in there can whet their appetite. We wouldn’t believe Matt on this point until our neighbours find a hole in their tent in the middle of the night!

On the last day, we leave the wildlife of the bush and return to the civilized world of the main city where, thank to Matt again, we could get into the Government’s House of Hobart for a visit of their prolific garden and orchard. These provide food, flowers and honey for the entire house, and host the oldest drying cabin of the island, as well as a long wall built by the first convicts from Europe. We walk through the famous Salamanca market, the place that highlights the finest Tasmanian products and crafts every Saturday. A stand of beautiful fruits and vegetables catches our attention; it’s Harvest Feast, run by the energetic Michelle Dyer who has created this platform where she carefully sources every product from a responsible and sustainable producer and brings them to people and restaurants. I leave with a little pocket of dried Mountain Pepper berries, the very same that we saw growing wild in the bush few days earlier and that brings a warm and pungent fragrance to a dish. A couple of Nant Whiskeys later, we’re kissing Tassie goodbye and returning to Melbourne with a little sand in our hair and the presence of the bush still haunting our minds. I’m glad Tasmania is not that far away after all, and I’ll definitely go back to check if the devils really swirl around or if I should take another sip of that delicious Bourbon Wood Single Cask whiskey. 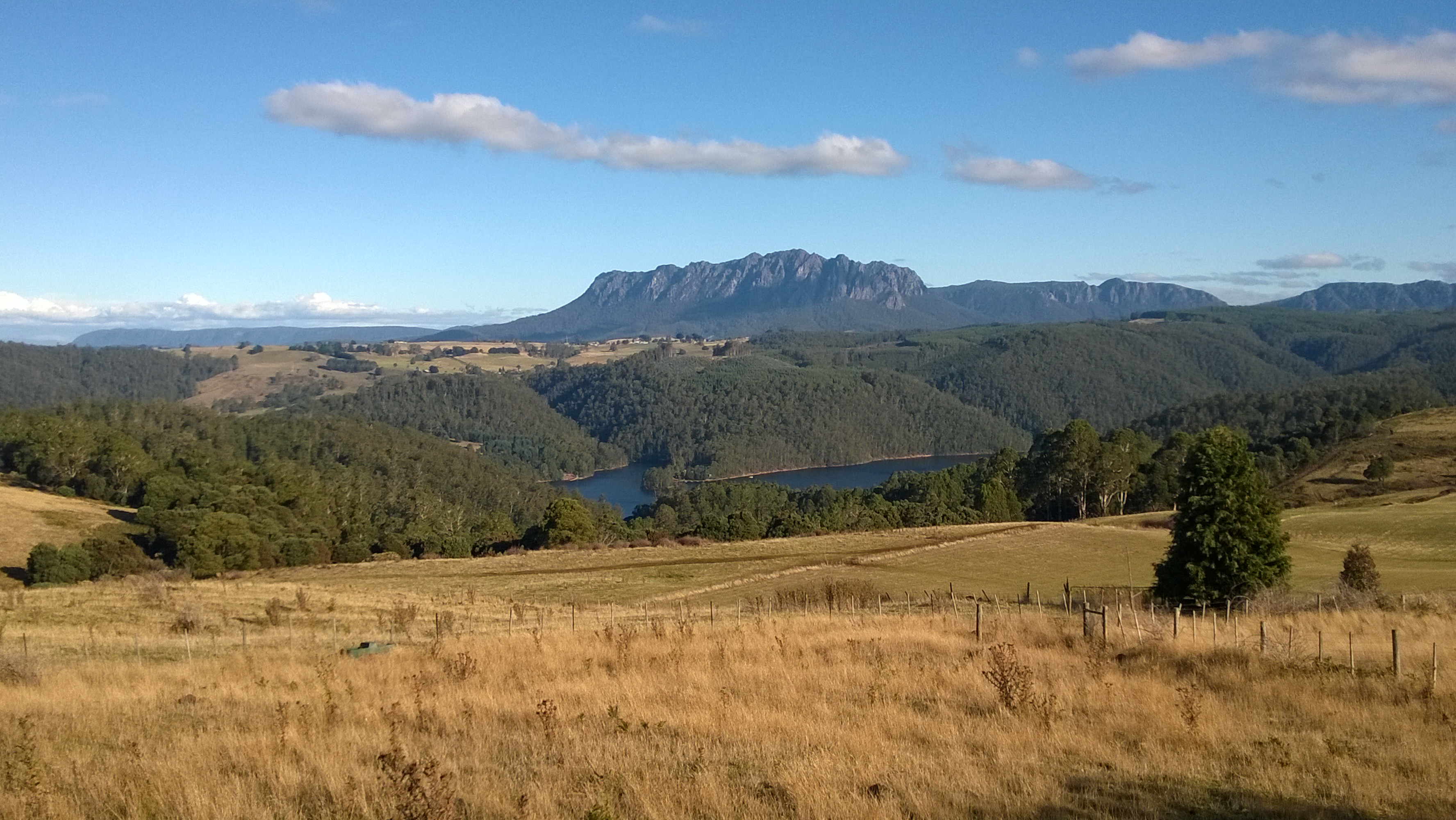 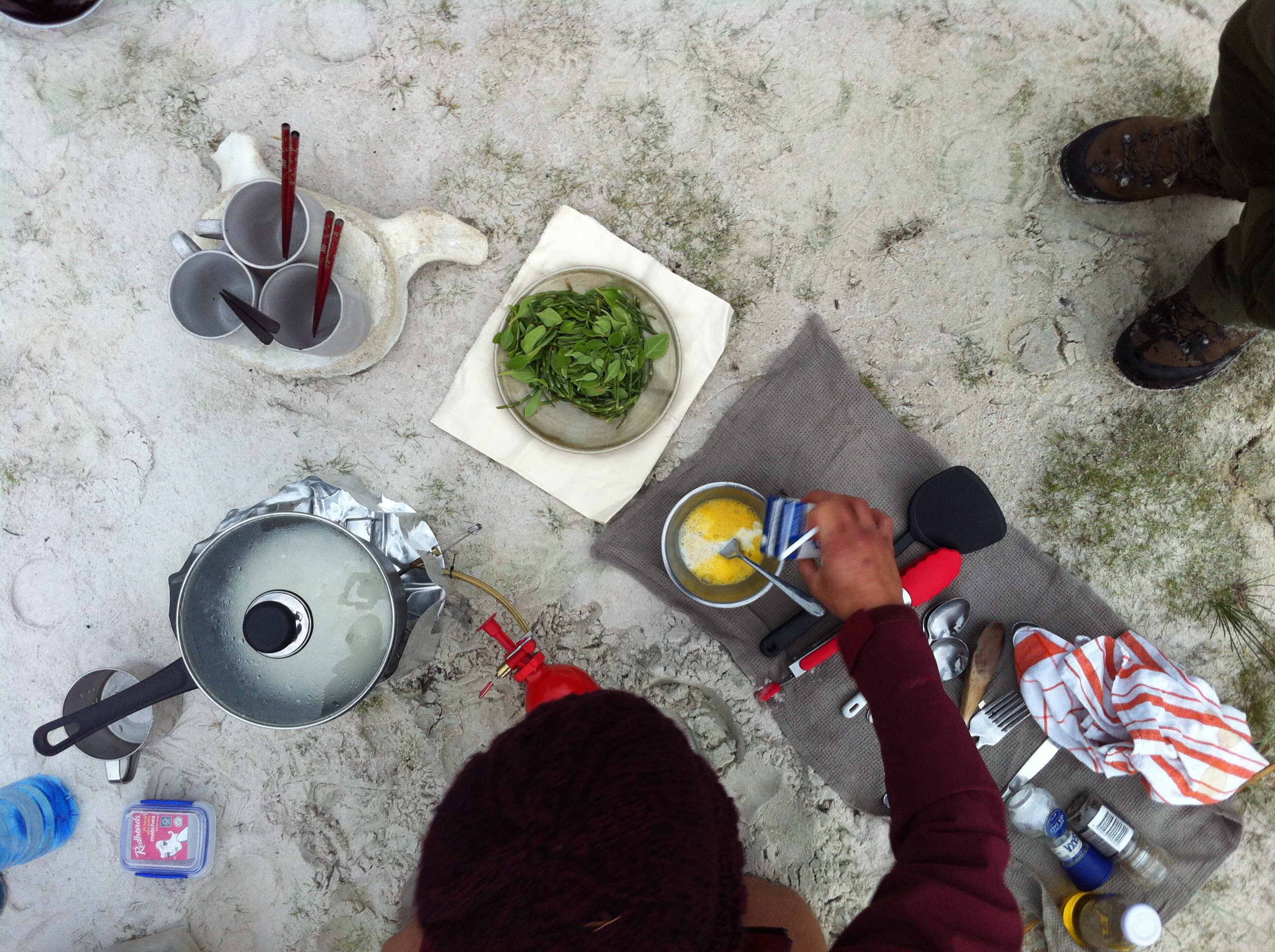 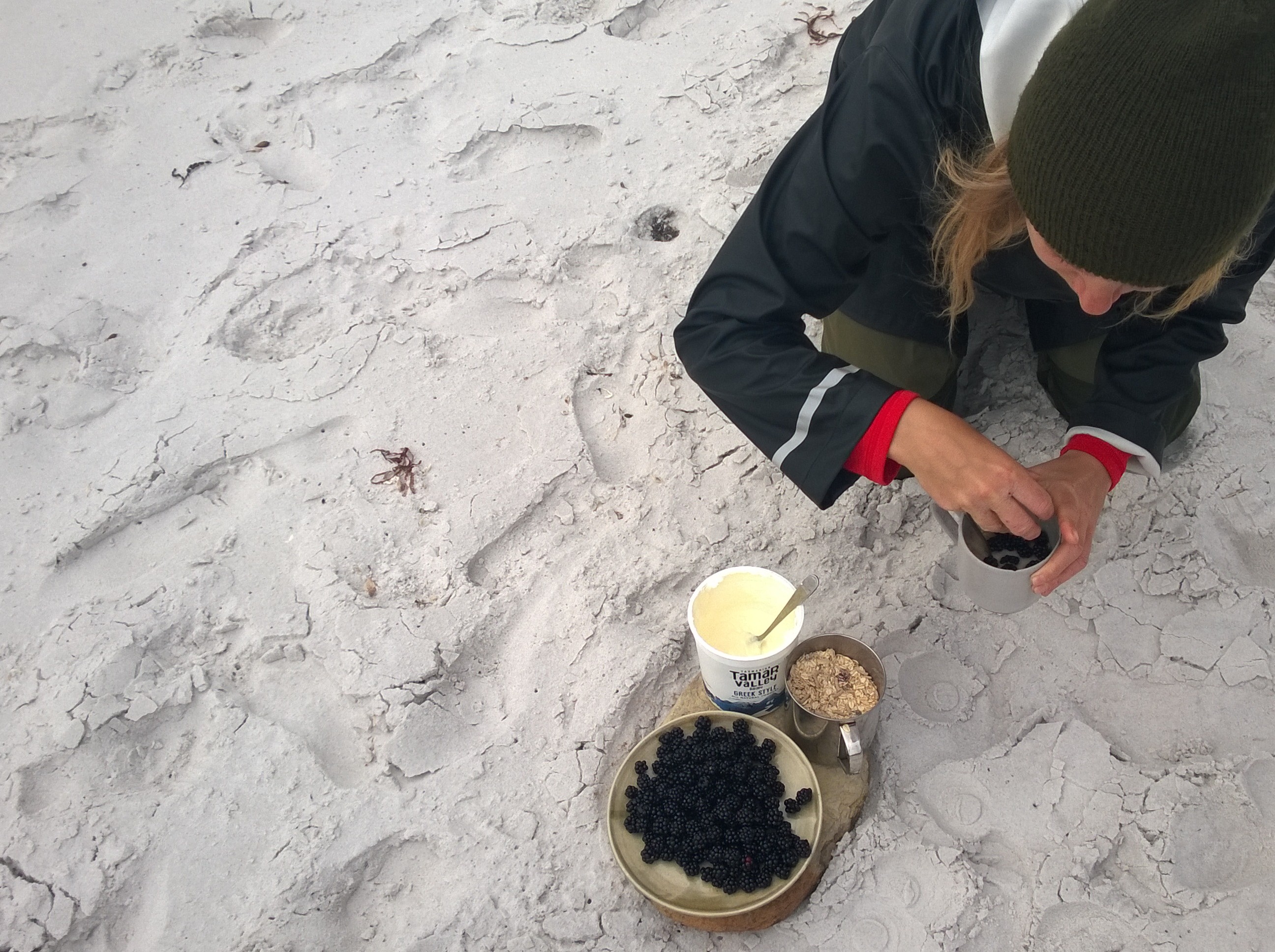 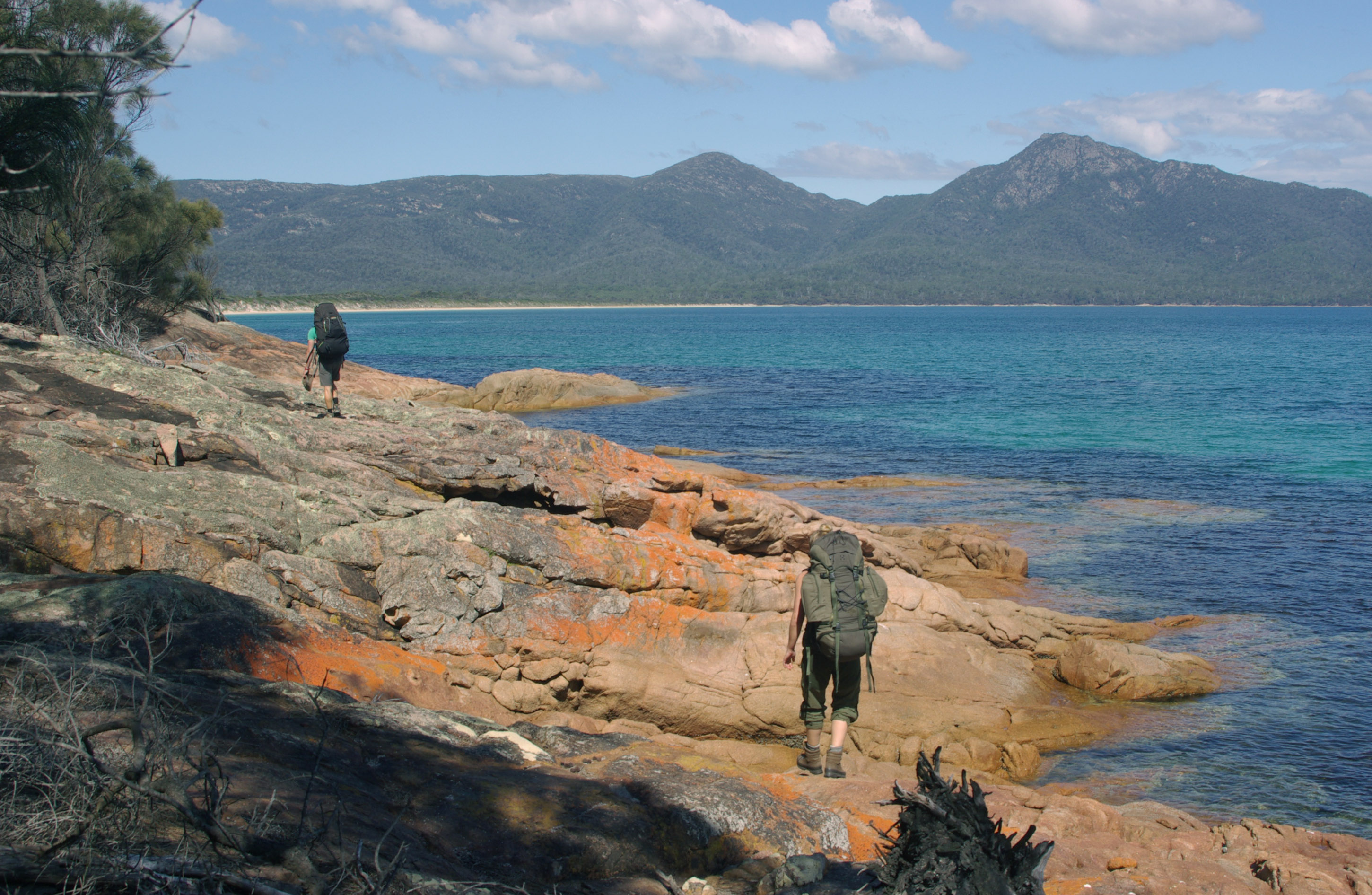 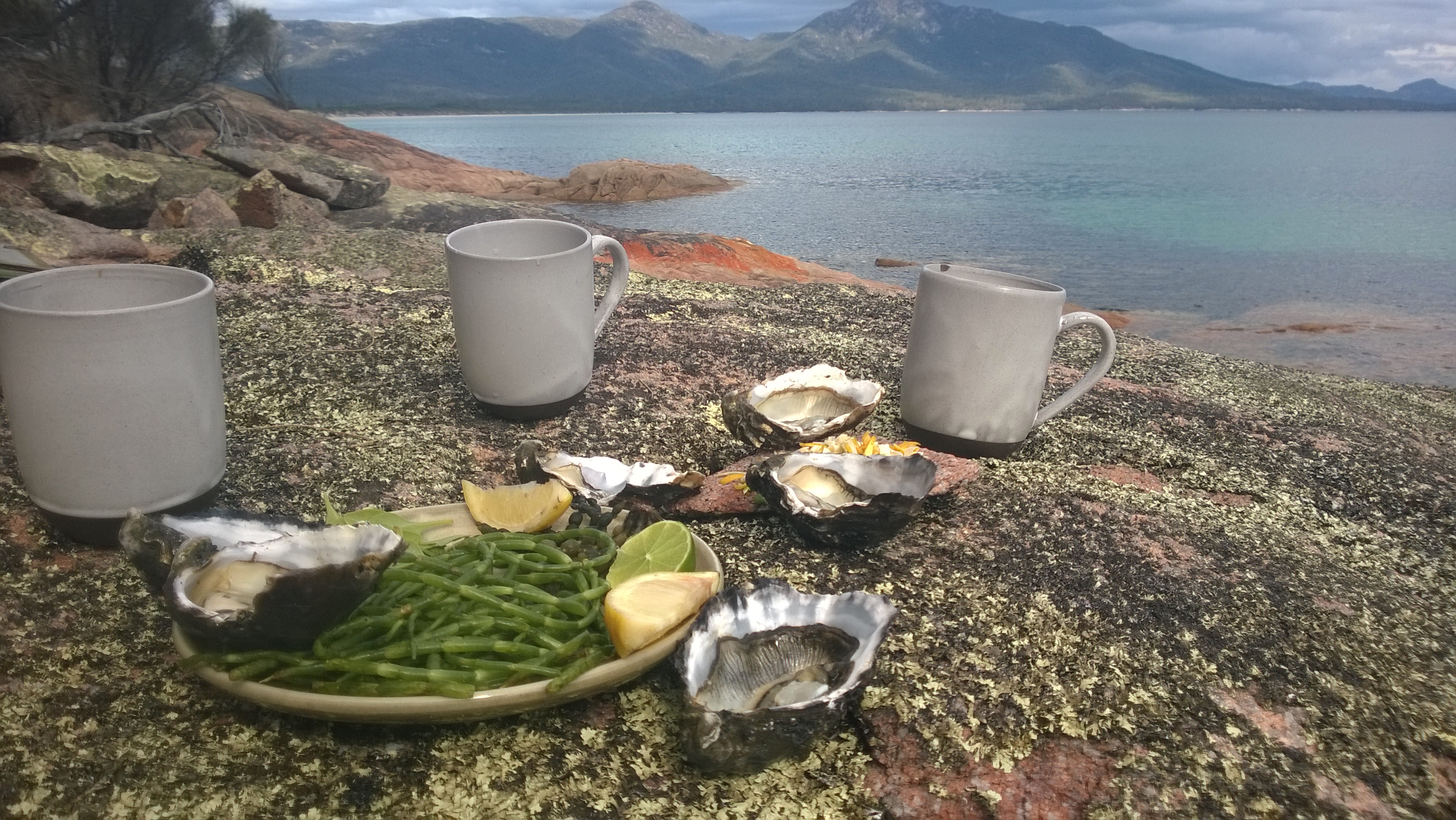 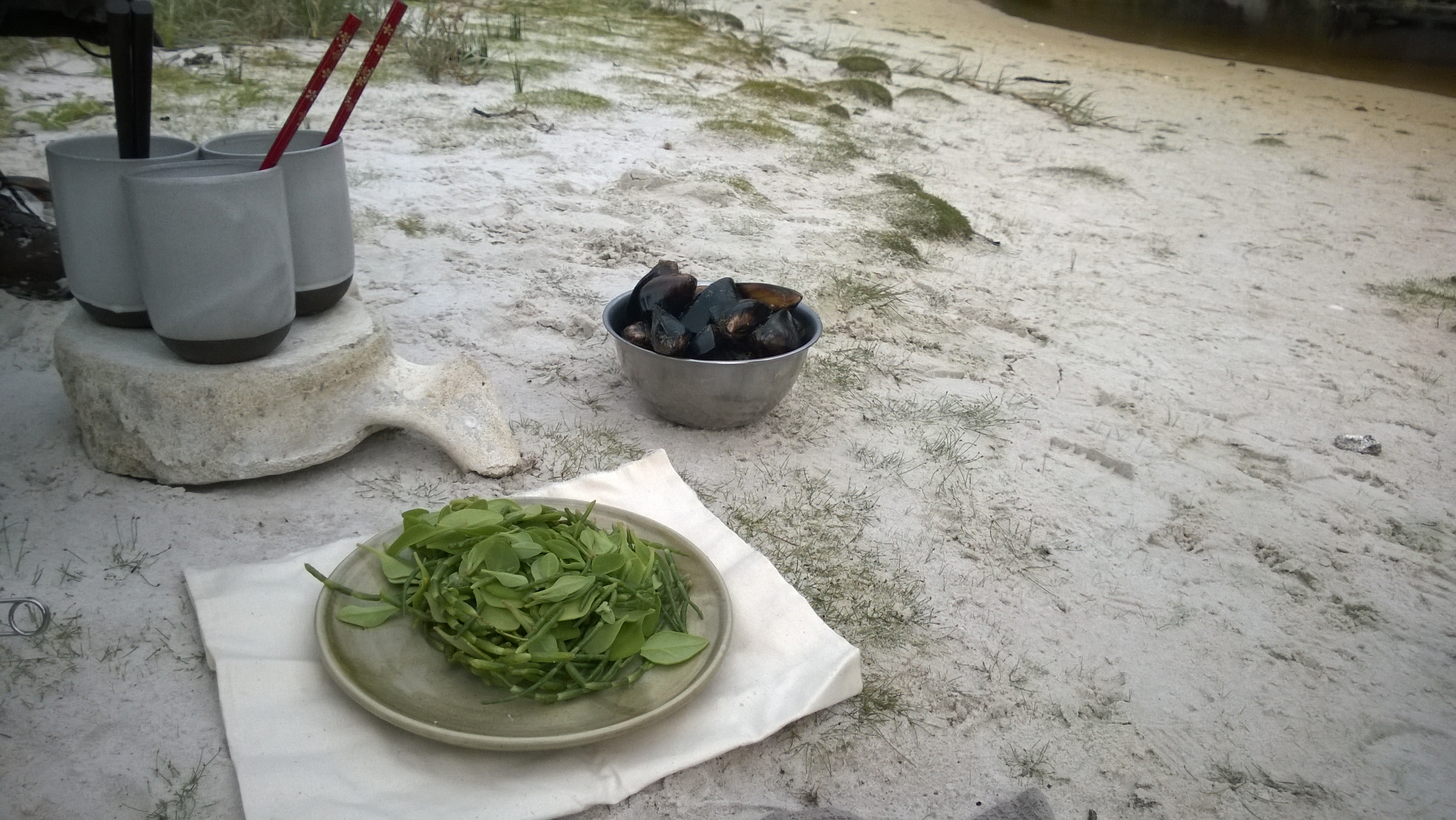 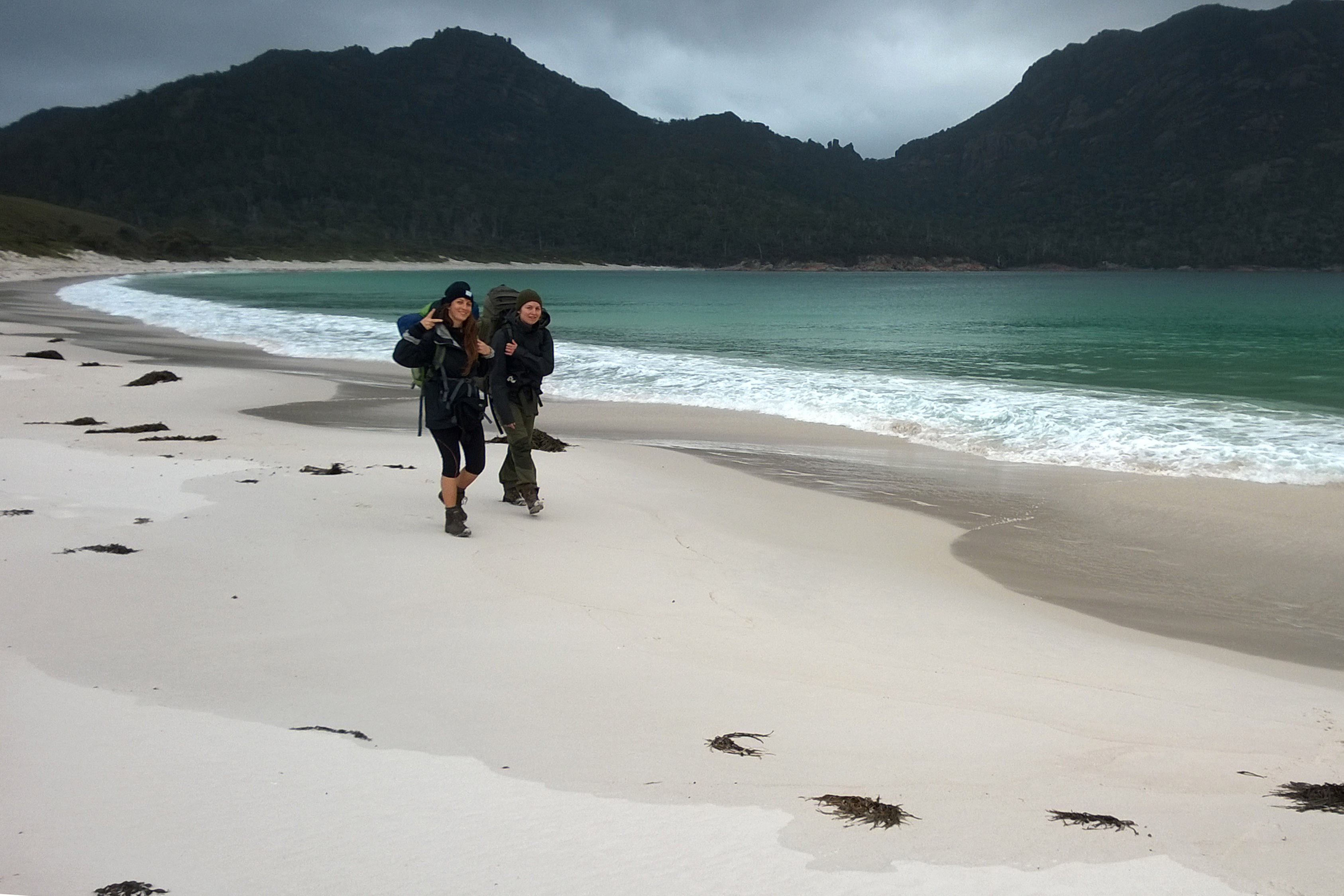 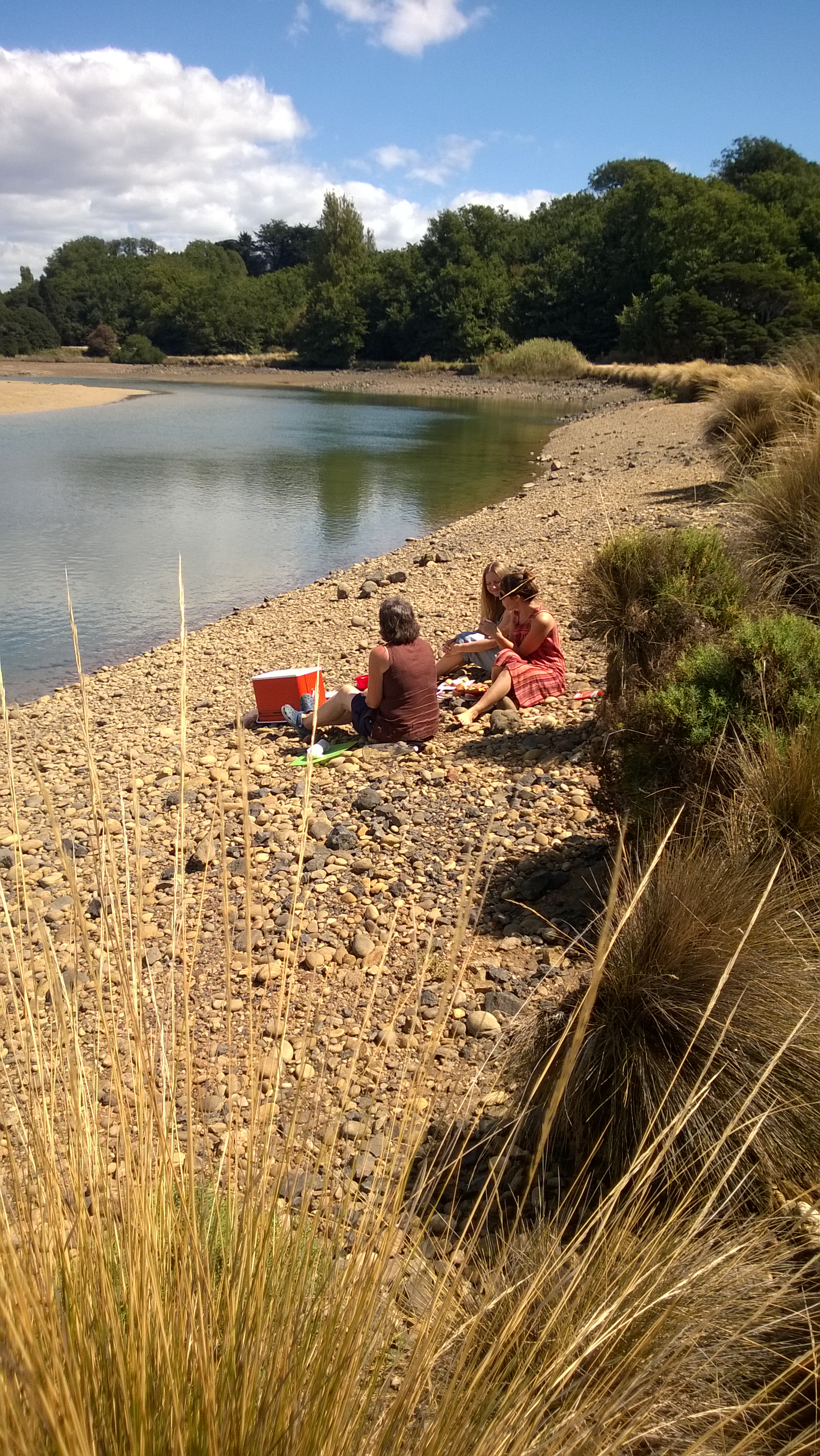 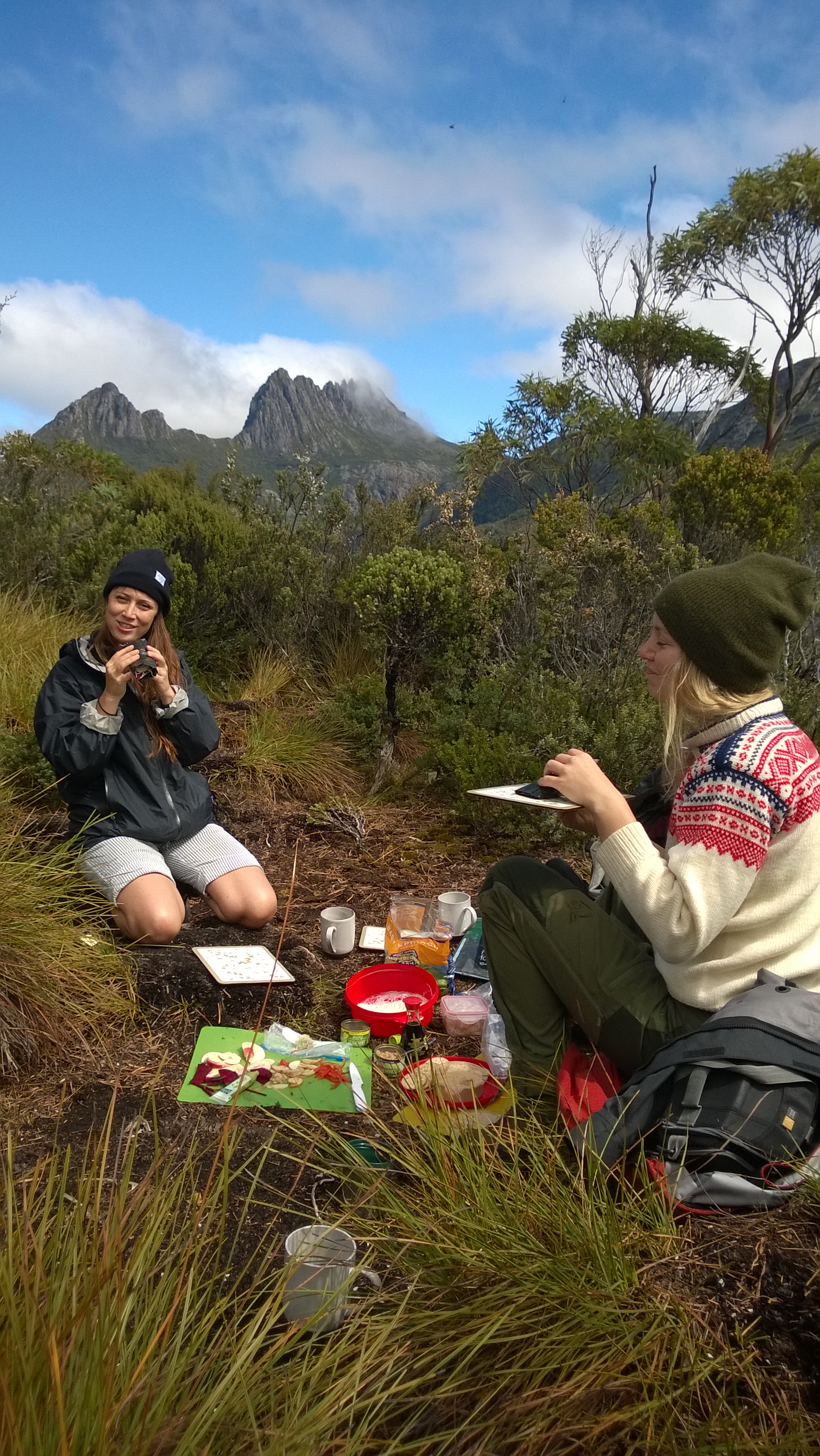 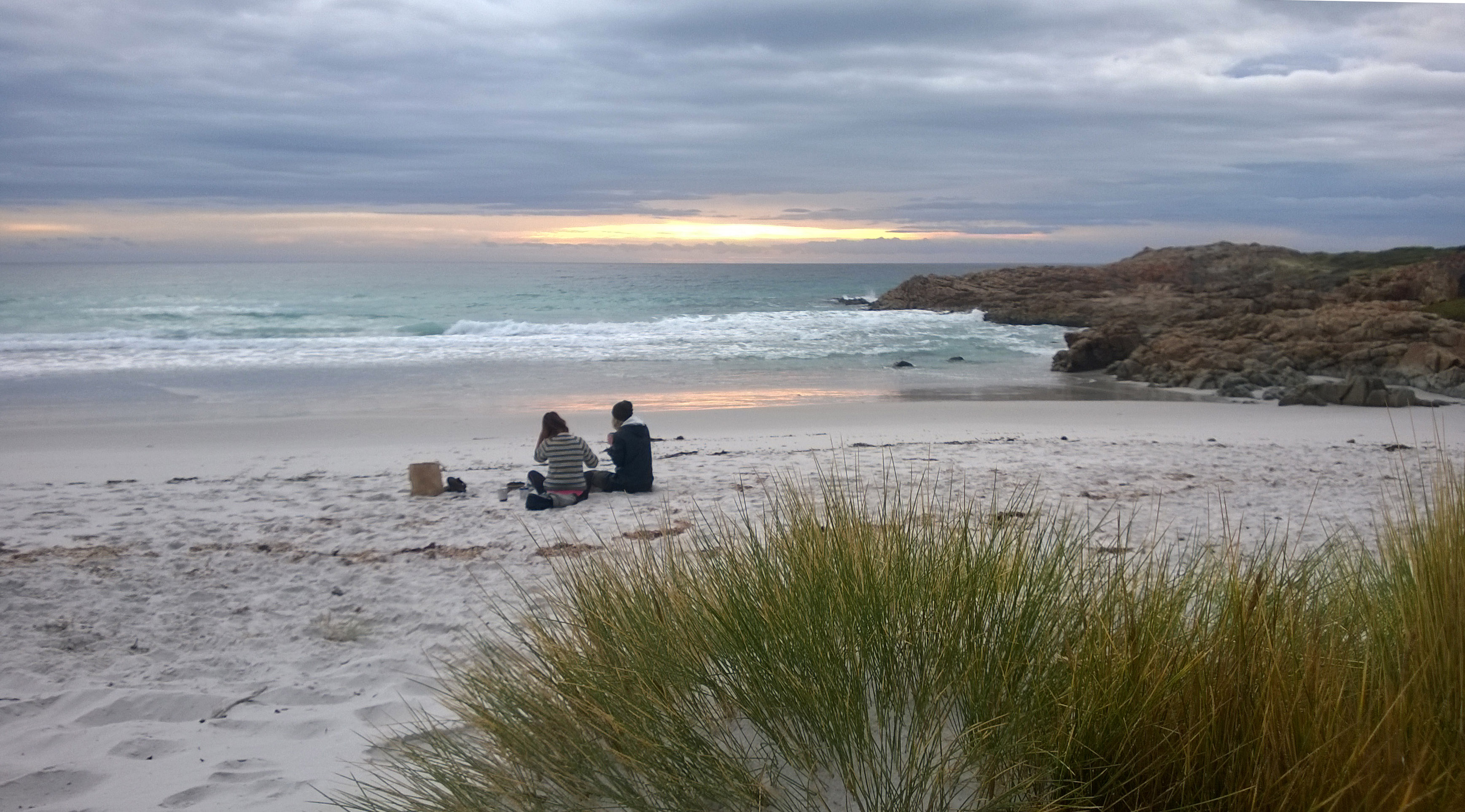