OSLO. Dark grey sky, it could almost pass as night. It’s Saturday. Restaurant Day. On the lawn between the Academy of Art and the freezing river Akerselva lays a tiny hut. It wasn't here yesterday.

Inside there is light, shadows of people moving, and crossing the wet lawn carrying two massive pans, fresh bread, sour cream and herbs, are Thea Urdal, Mads Pålsrud and their helpers. In the hut, guests have huddled together, crawled up in the 60’s sofa and chairs, woolen socks on, hats and scarfs. Sipping coffee, eagerly awaiting one tasty bright yellow and one beautiful red. The smell of hot, freshly made pumpkin soup and Russian beetroot soup fills the cabin. More curious people gather, happily having their soup outside in the fresh air.

–We have fought with one vegetable each! Mine was the pumpkin, says Thea Urdal. She and Mads built the house themselves, with a little help from friends. –It’s definitely the first time we both have built a little house, says Mads.

–Ah, this is so good! This pumpkin soup is a bit sweeter than the beetroot, says one girl happily, stealing from her boyfriend’s soup to check if it’s better than hers.
Restaurant Day started in Helsinki, Finland last year, as a rebellious idea that anyone should be allowed to run a restaurant – at least for one day. The idea became a movement, it spread throughout Europe and to cities like New York. This culinary circus is arranged four times a year, and is slowly growing in Norway too. It allows foodies to cook and eat various, and often unusual cuisines. This year, four skilled hobby chefs in Oslo opened little ventures to the public. Lille Finske Fabrikk offered Finish delights, you could have Italian pizza in Grunerløkka, Hot’n spicy & sweet tempted people with empanadas and hot chocolate while Thea and Mads’ soup kitchen called Mini Munnfull gathered an excited crowd for heart warming soups. In Trondheim, Zmoht delivered exotic, Bosnian cuisine.

First, organizers in Helsinki worried they would get into trouble with the local government. Instead they received applause and Restaurant Day has since helped enhancing the city’s restaurant scene.

–I am so glad this is happening in Norway too. Last time I went to Restaurant Day in Helsinki, there were over 150 restaurants to choose from. We checked all web pages and planned the day well before venturing out for a long lasting feast, says Raija Seppala from Finland. She is on a mission to visit all four pop-up restaurants in Oslo this afternoon.

On Restaurant Day in August, Mads Pålsrud put up a long table on one of the bridges crossing Akerselva, serving freshly baked bread and cakes to the public. The stunt was a success, and it inspired Thea to suggest working together on this occasion. Elevine Berge and Jo Daniel Storeng joined the team as cook and architect.
The eco-shop Røtter donated vegetables for the soups, Bjølsen bakeri sponsored bread, Tingstad donated cups and Maxbo and Plastmo gave materials for the hut. People pay what they want for the soup and all profit goes to Kirkens bymisjons Christmas campaign, donating hot meals to homeless people.

All shoes are moved inside the hut, as the sky breaks into a serious downfall. It sounds like hail hammering on the roof, adding to the warm, cozy feeling inside. You get drawn back to childhood, when you were cuddled together with friends in a wooden playhut, sharing secrets. The Shins on the stereo. Scrabble and memory games are on the table. No one plans to leave this warm oasis for the darkness outside. A bowl of mandarins are sent around. Thea fills up her guests’ coffee cups.

–The plan was to close around five pm, but I think we’ll just stay here into the night, she says.

This is only the beginning. We in Food Studio hope more cooks in Oslo will join Restaurant Day and set up their own fabulous food stalls for the next event in spring. 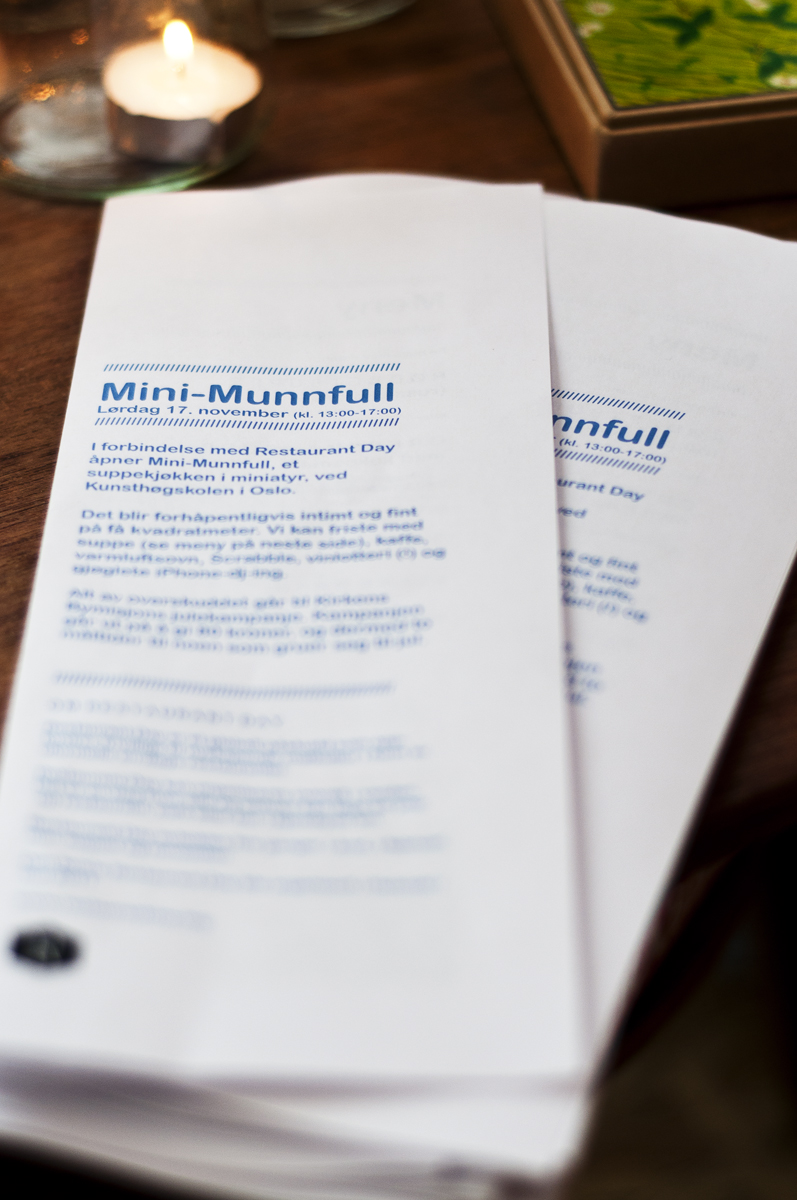 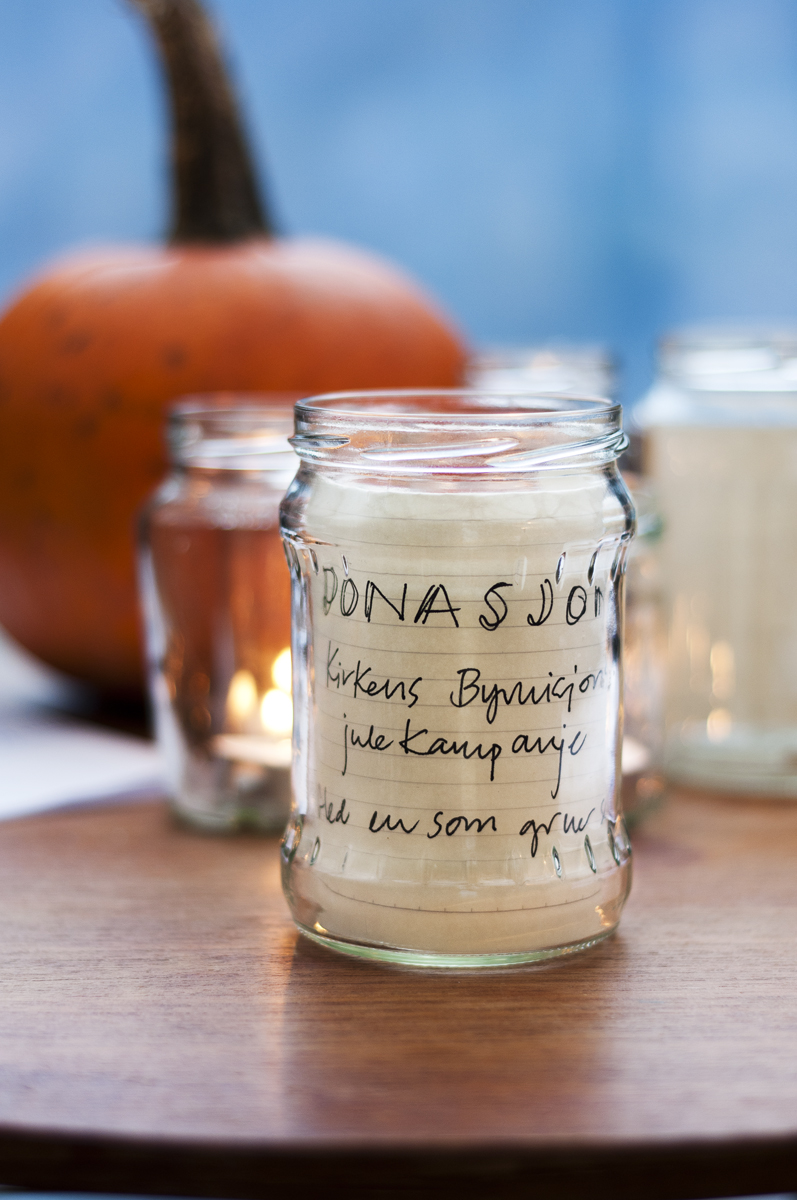 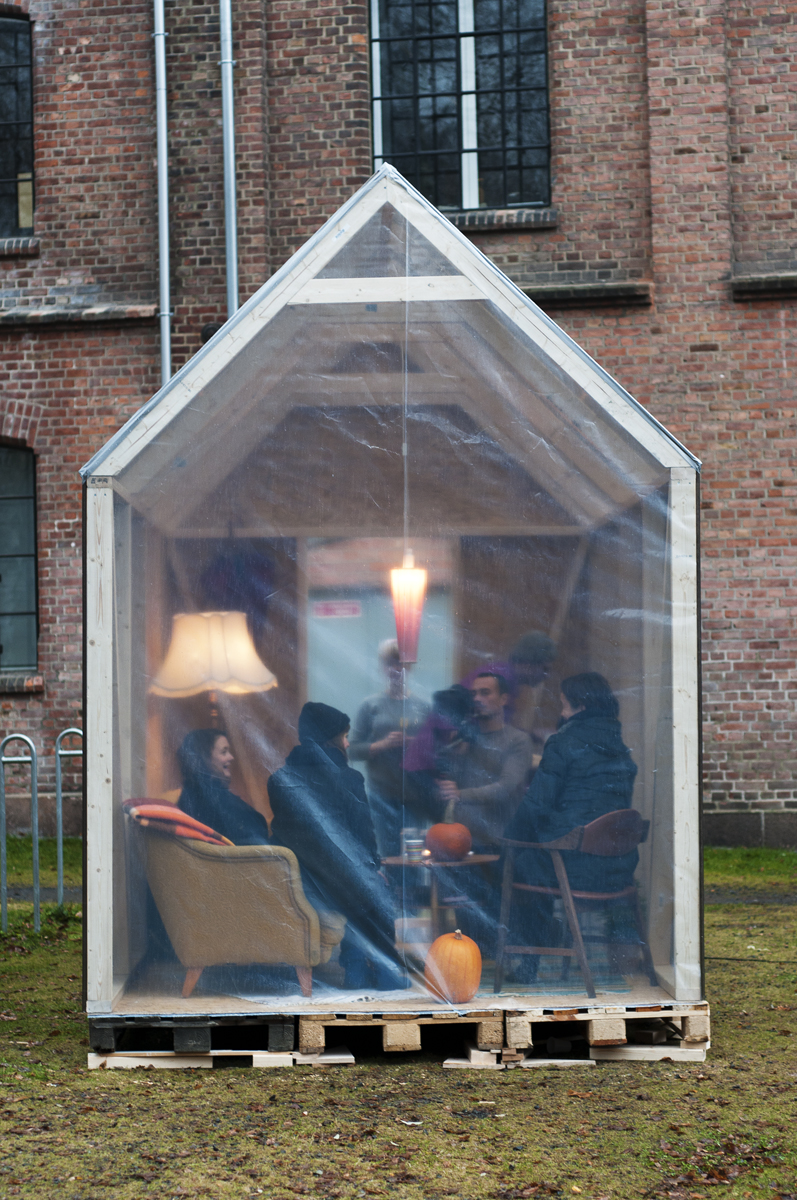 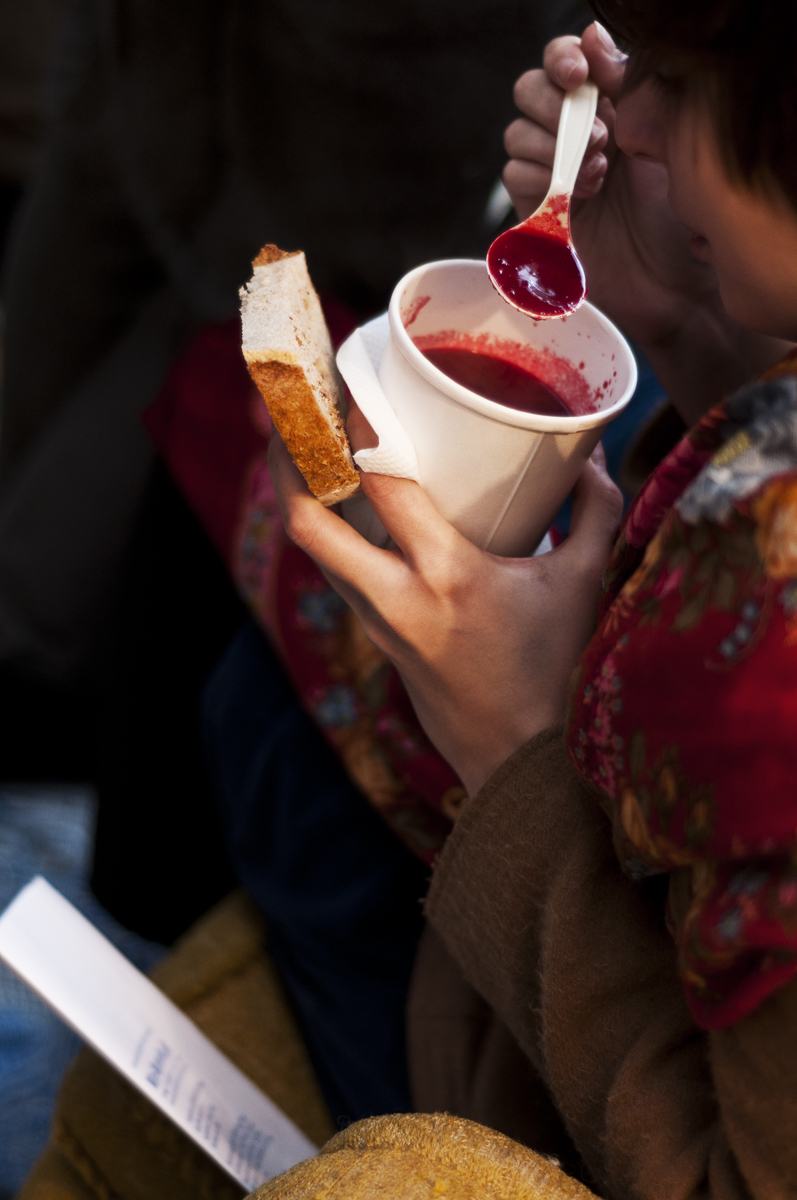 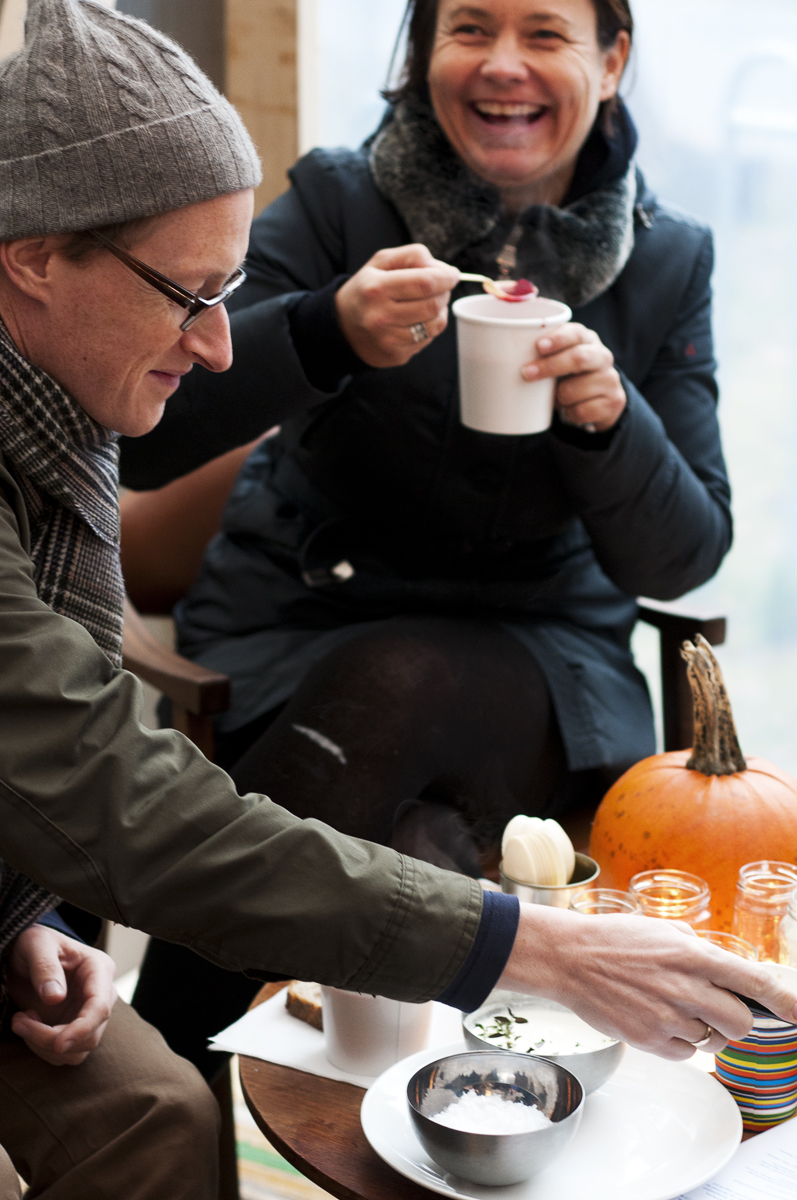 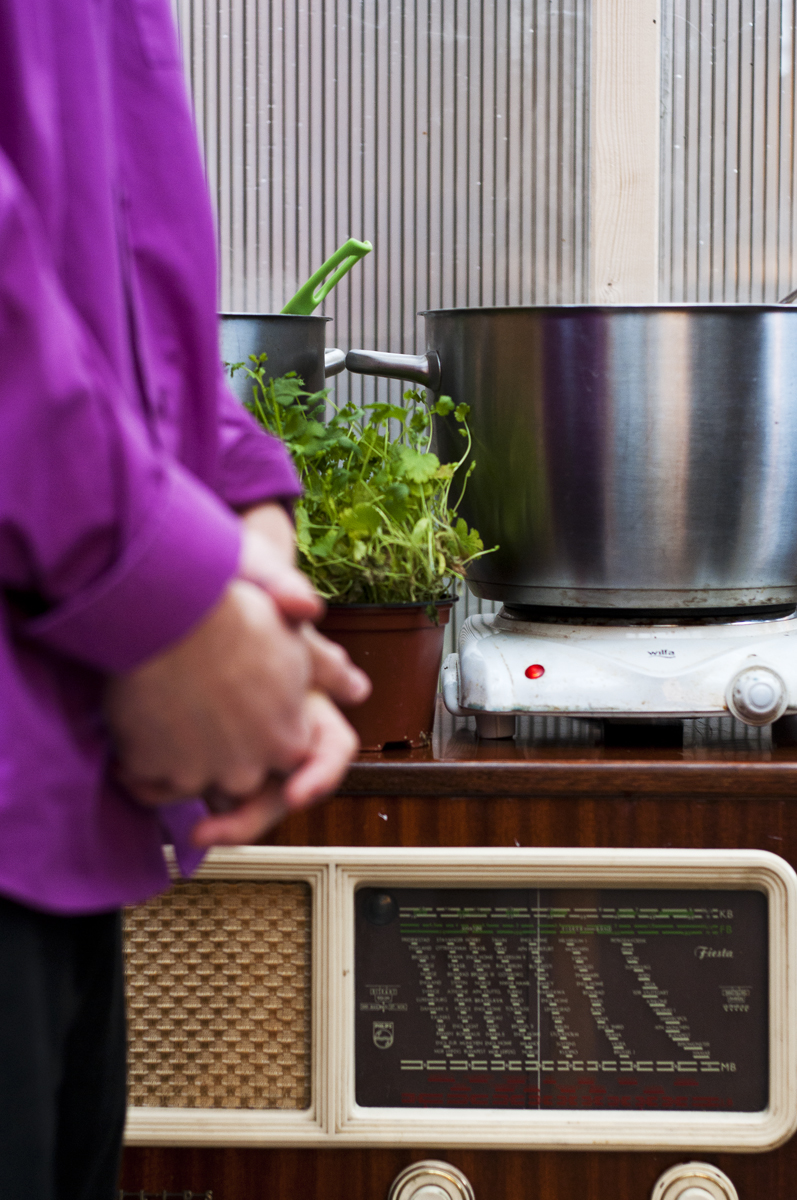