A Saturday afternoon of early fall, a group of food lovers, art lovers and lovers of history, having been enticed by the promises of Food Studio’s ninth event, met at Aker Brygge to begin their voyage towards an evening of eating in the shadow of Munch.

Our destination was Hvitsten, and the first stretch was covered on the ferry south to Drøbak. On the boat, bread, Seljord butter and proper goat cheese was served as a snack for the journey. Upon arriving at Drøbak, a deep burgundy veteran bus from the 1940s provided a fashionable mode of transport. A short ride in this well-kept vehicle took our party through the picturesque countryside of Hvitsten and at last, into the forest, where the remarkable Ramme Gaard awaited.

As we arrived at Ramme Gaard, thirty-one guests full of anticipation were guided through the lush, Baroque garden by Ramme’s own guide Anne Sollund. Once an apple grove, the garden is now open to the public, artfully crafted with ponds, sculptures, fountains and cascades. It was the perfect beginning for this historical journey. The tour continued down to the beach front where a beautiful, white turn of the 19th century house is situated right on the shore of the Drøbak fjord. Following Munch’s mental breakdown in 1908, he was eager to lead a healthier and calmer life, and consequently purchased the property he found to be the most beautiful along the coast. Munch took ownership of the property at Nedre Ramme in 1910, and stayed there on and off until his death in 1944. The rolling, wooded hills of Hurum could be seen across the fjord, and behind us was the forest with trees just about to undergo their annual change in colour. All about the property, tall red pine trees were standing, as they had done a hundred years earlier in the time of Munch.

Passing through the entrance of the house to the deck facing the stunning fjord view, we were greeted with chilled Billecart Salmon champagne served in a variety of antique crystal champagne glasses. As soon as everyone had gotten their glass, Food Studio-founder Cecilie Dawes welcomed everyone to a very special evening in the company of Edvard Munch. Toasting in classic champagne on the deck of Munch’s home felt delightfully appropriate, knowing the artist’s fondness for good beverage and beautiful scenery. It was easy to understand why Munch had chosen this particular spot in his quest for a more serene life – it is hard to find a more peaceful and untouched site along the coast of the Oslo fjord. Imagining how it must have been at Munch’s time, with his white horse Rousseau grazing on the verdant hills outside, chickens, doves, turkeys and ducks roaming about, and the sail boats and steam boats passing by, the place must have been a true paradise.

Kjartan Fønstelien, Food Studio’s own archaeologist and avid Munch historian, enlightened the crowd about Munch’s life at Nedre Ramme after 1910. His deep enthusiasm for the subject was not hard to join in on, and his thorough knowledge of Munch’s life, art and writing was a pleasure to hear of. The rest of the evening, Kjartan was our guide to Munch’s life and his relation to food, and entertained with many passages from Munch’s notes, diaries and letters.

Munch’s house is currently being restored to its past glory, but the somewhat raw appearance of the bare walls and floors did not take away from the experience of walking in the house of Norway’s greatest artist – quite the contrary – the stripped inside of the house imparted a strong feeling of authenticity to the atmosphere in a way no museum has the power to. It was a great privilege to visit the house before it was fully renovated and opened to the public. Inside the house were copies of the paintings which had been created at Nedre Ramme, and photographs of Munch from his period there, even a one of a kind picture of the painter smiling!

As we once again gathered outside of the house, this time on the backside facing the forest above, the preliminary results from the archaelogical investigations which had been carried out last winter were presented. The excavations outside Munch’s home have revealed the place and size of his outdoor atelier. Broken bottles and paint tubes were what the excavation site had abounded with. Until now, there has been little known of this estate and Munch’s relation to it, but the archaelogical excavations have provided a source of insight into this period of Munch’s life.

On our way up from the beach and Munch’s home at Nedre Ramme, we were guided along the fields of Ramme by the farmer himself, Eric Brinkhof, and his wife Louise. The remarkable farm produces milk, meat and various vegetables, and the products from the farm are chiefly served in Ramme’s organic café. The rest of the farm produce is sold to restaurants, visitors and other grateful customers. The farming at Ramme is biodynamic, meaning it is run after firm principles which include and surpass organic farming practices. The resources at Ramme, the soil, its plants and its animals are seen as an ecological whole. One of the aims in biodynamic agriculture is to balance these resources so that the farm is self-sufficient with feed for its animals, and manure for fertilizing the fields, with a healthy, fertile soil which supports and is supported by this never-ending cycle. Even though this cycle is already well established, Eric zealously explained that the balance on the farm can be even further perfected, there are plans to build a new cowshed to keep more cattle on the farm, so that the feed resources can be fully harnessed and turned into more manure for the fields, as well as wholesome biodynamic milk and meat.

Seeing the beautiful red and green beet leaves protrude from the autumn soil, we were reminded of the meal we were about to feast on, in which the fresh ingredients from the fields we were now watching would play a major role.

It was still daylight when we came up to the large, glass greenhouse. As we entered the greenhouse, the deep, earthy scents of rich soil and tomatoes slowly ripening on their vines came to our noses. Passing the portable kitchen put up in the middle of the greenhouse, the guests found their seats at the wooden tables placed at the far end. Cecilie gave a short speech about the idealism, values and ideas that create the foundation of Food Studio, before we were served our first course with an introduction by Kjartan who explained the background of the meal based on Munch’s life, and the beverage being introduced by the well-informed wine steward Martin Kloster from Moestue Grape Selections. The course was a rustic starter of pork fat and bread on a wooden plate, served with Bøgedal beer with a taste of bog myrtle. The rich taste of the soft pork fat, mopped up with crusty bread was contrasted by the sharp beer, which had bitter bog myrtle as interesting substitution for hops.

Next, root vegetables sliced as thin as leaves, dressed in a mustard vinaigrette specifically described by Munch in his notes, were served as a colourful in-between dish. The dish perfecly reflected the current season, showing off a somewhat underappreciated aspect of root vegetables – their crisp freshness combined with tastes of earth notes, particularly in beets. As we finished this root vegetable salad, darkness was already enveloping in on our glass dining hall. The sky was slowly revealing one star after another, although this was likely not noted by the diners, the food on the table being much too absorbing.

The second course was most definitely a food no one present had ever eaten before. Anchovy-sized common minnows (ørekyte) were deep fried into a crisp and delicious treat, together with a trout roe sauce. The small fish are not normally considered as food in Norway, but undoubtedly no one would protest on their qualities as top-notch fare. The devoted Kjartan had been responsible for procuring the fish, and read aloud from a letter Munch wrote in early childhood to his father, where he writes about catching minnow ”as large as small herring”.

Munch was very fond of fish, so naturally our third course was also fish course, consisting of luxurious monk fish cheeks. The following plate on the table was an umami rich dish with a surprising main ingredient – horse steak served with a flavourful funnel chanterell stew. The steak was tender, perfectly cooked medium rare, and had a pronounced, excellent taste.

The classic Norwegian dessert tilslørte bondepiker was our last course. Crisp, toasted oats were veiled in fluffy whipped cream and applesauce, which for the evening’s theme was made from apples from Ekely, where Munch had another home the same period. A sweet Rhein riesling, which was certainty enjoyed by Munch a hundred years earlier, complemented the delicate dessert.

In traditional Norwegian manner, we finished our meal with coffee. Freshly roasted coffee from Tim Wendelboe, which had to be ground with a manual coffee grinder, with everyone at the table taking their turn. Munch writes in his notes that he loved the scent of coffee cooking on a portable stove. Nothing was more appropriate than old portable stoves being placed on the tables, with the smell from the burning stove and the aromatic coffee mixing in the air.

On their way out, the content guests got a little gift box as a treat for the Sunday breakfast the morning after, with the Ekely applesauce in a small jar, a freshly baked breadroll, an egg from Ramme Gaard, Tim Wendelboe coffee and a good ol’ fashioned Lohengrin chocolate. In the box, a little card bore the handwriting of Edvard Munch, concluding his near presence the whole evening: ”Thank you for the company, and all the best in the future – Edvard Munch”

Thanks to Tim Wendelboe for lovely coffee, Granit for decoration elements and Ramme gaard for the amazing produce and soroundings. 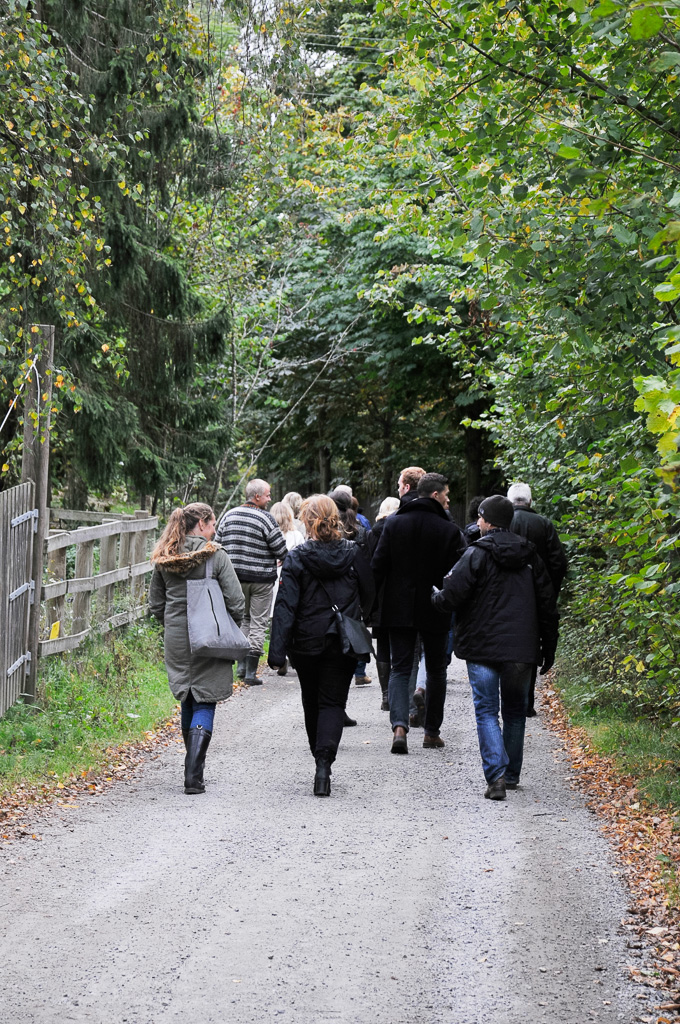 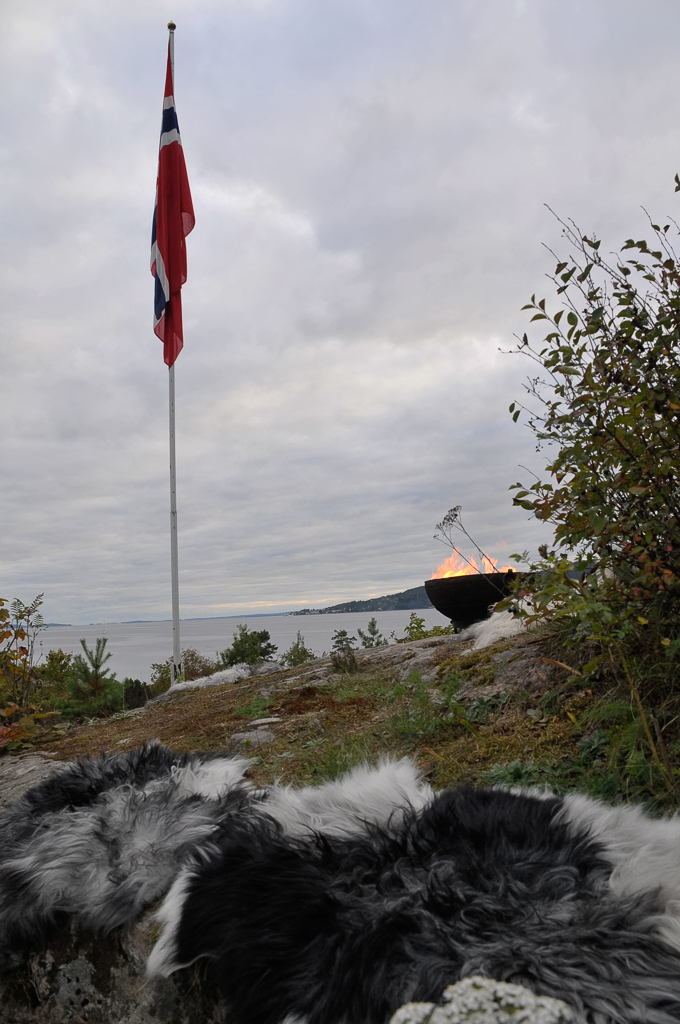 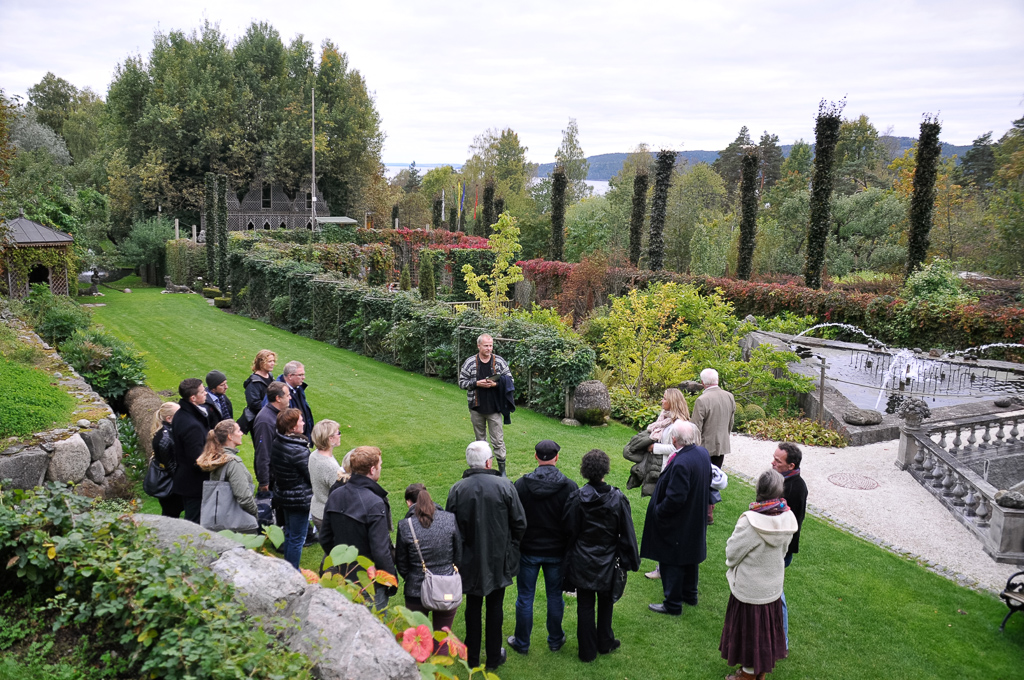 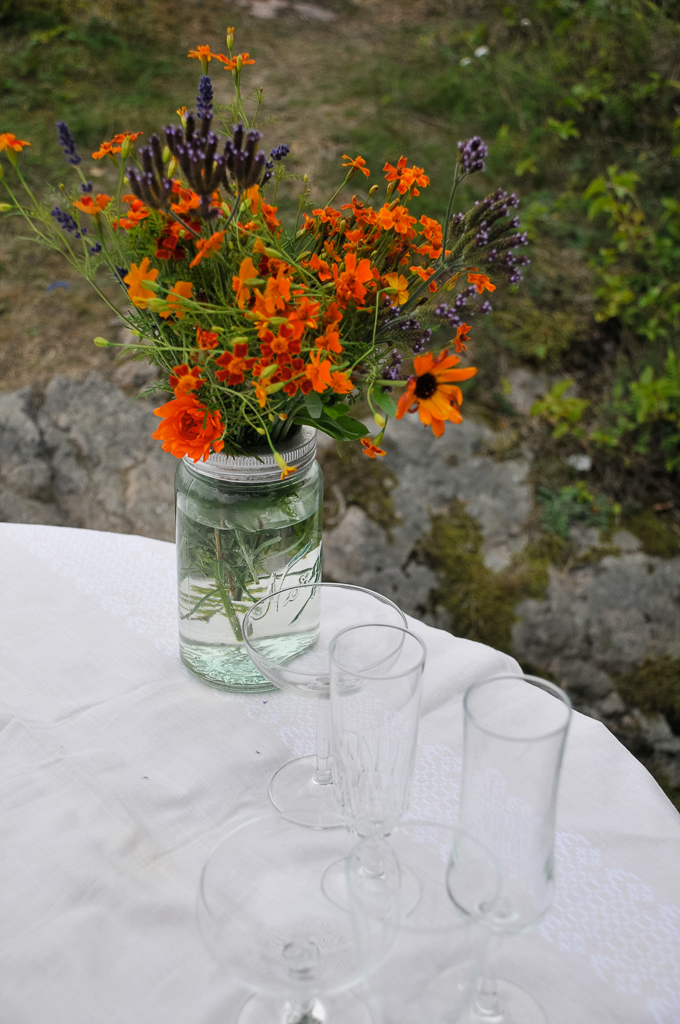 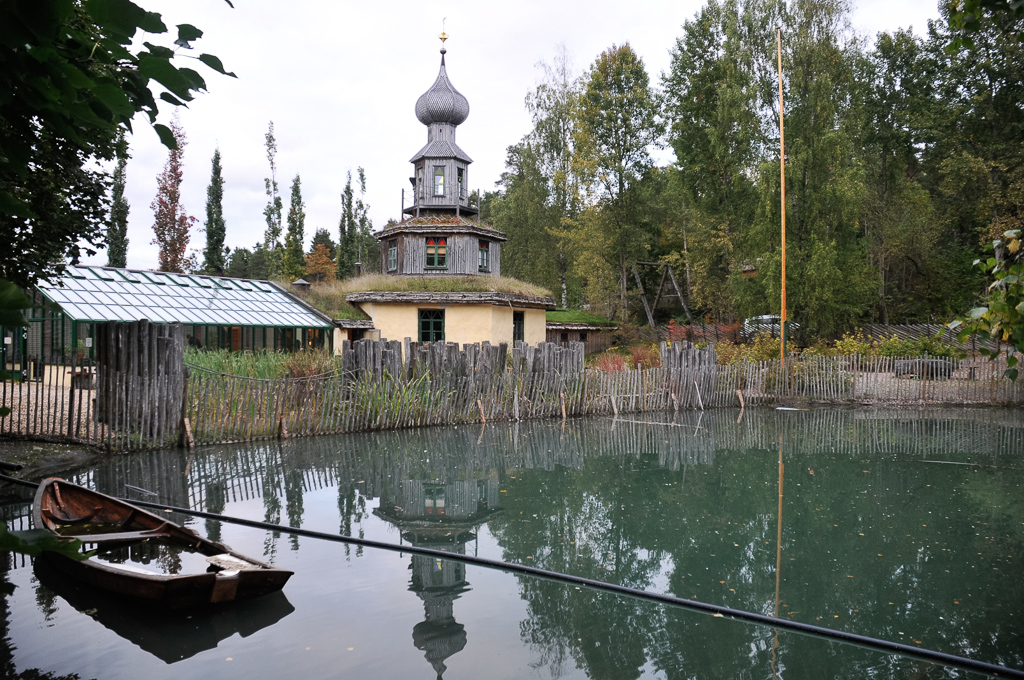 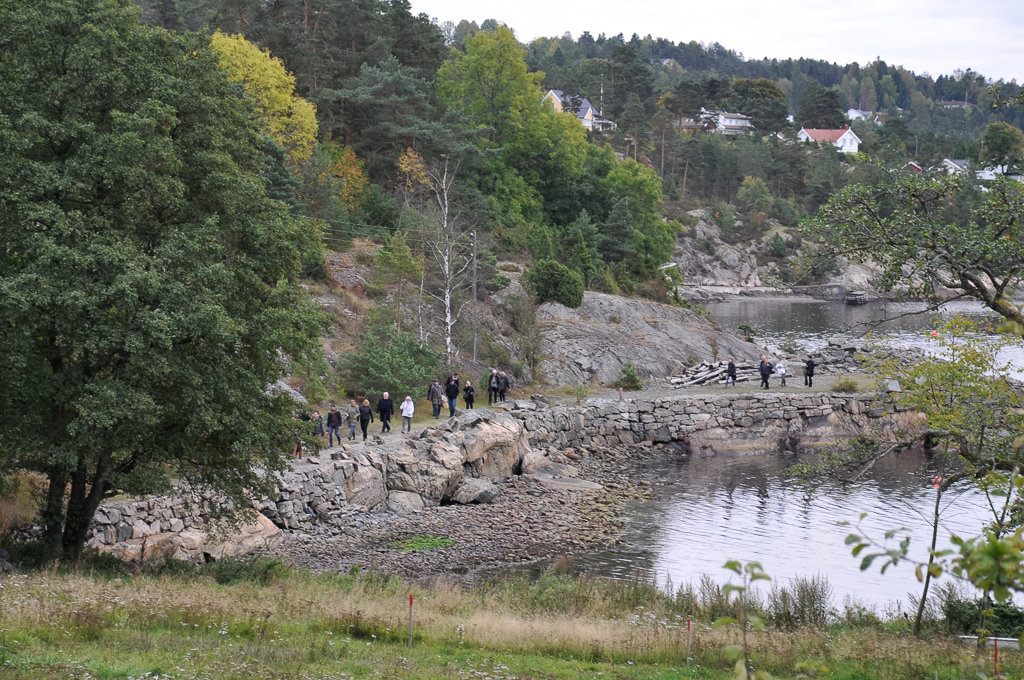 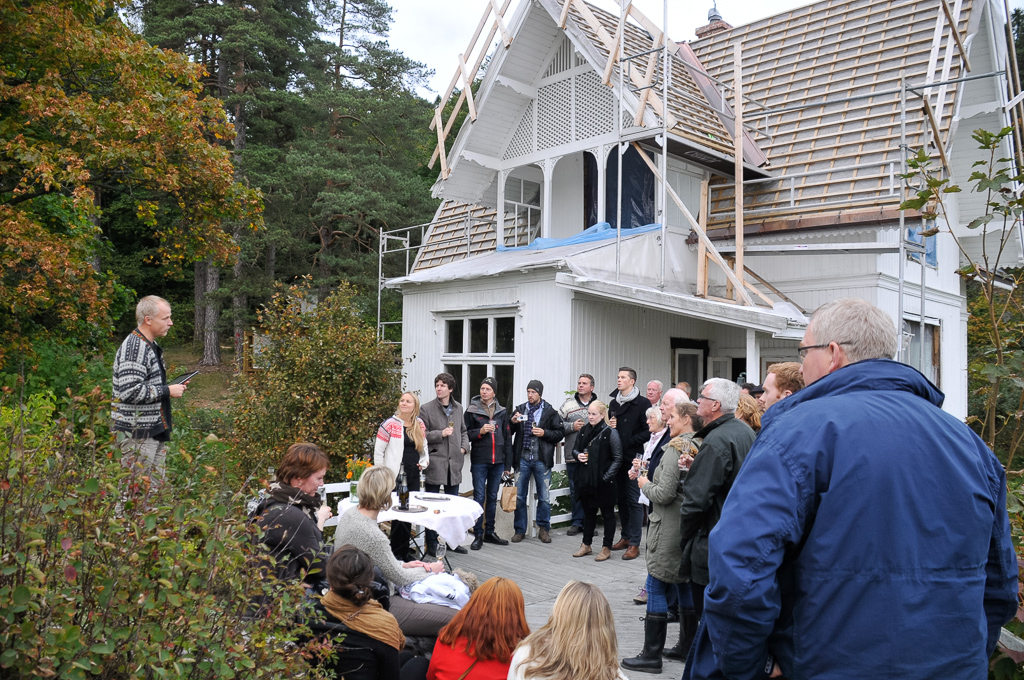 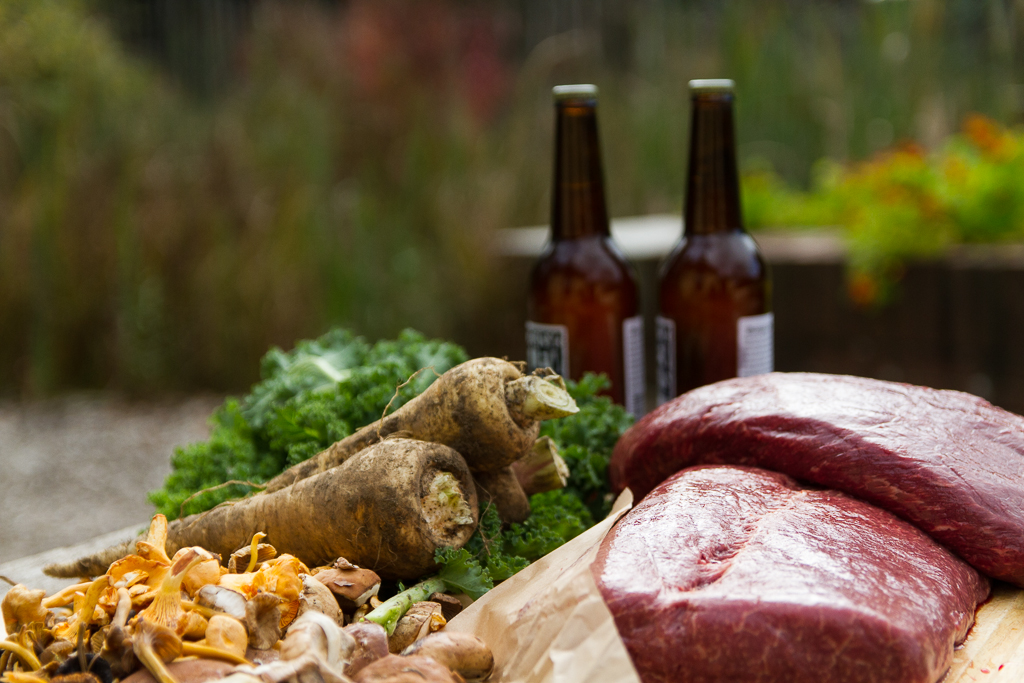 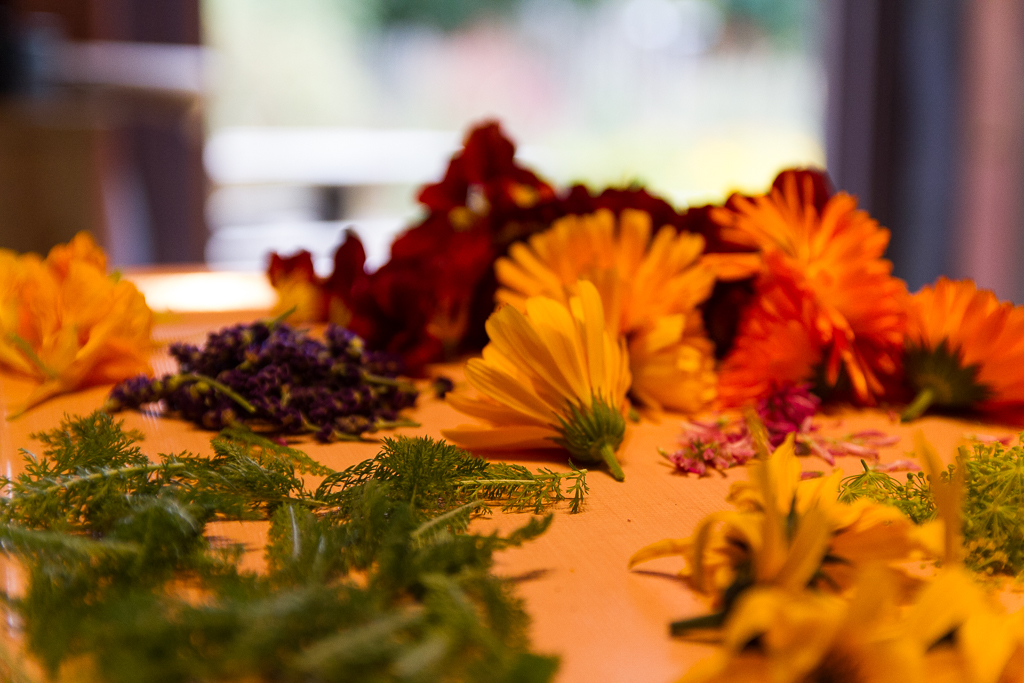 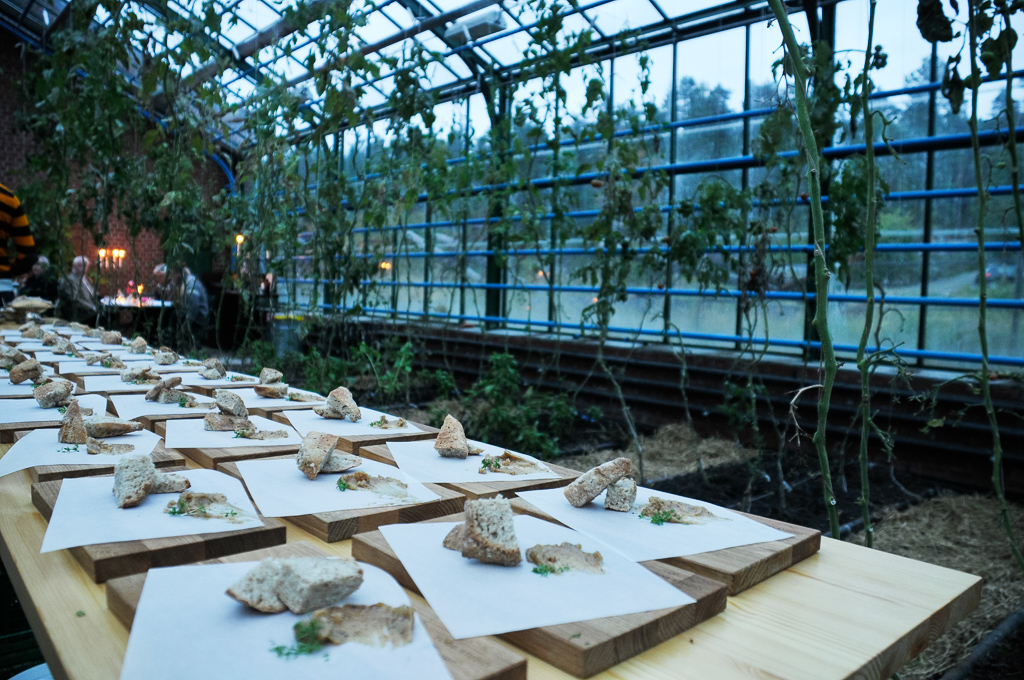