It was an ordinary Thursday of late September: it had been raining quite heavily, but the weather forecasts were promising. The garden looked fabulous and the greenhouse was in place in the middle of a field, a stone's throw from the king's old residence in Bygdøy.

This time, though, everybody was rushing around as guests were arriving at 17.00 and it was the first of three nights organized by Food Studio in Kongsgården. Hengsenga and its plots were not far and we wanted to focus on urban farming and all the great delicacies that can be cooked when growing your own vegetables.

Professor Linda Jolly’s house was the perfect place. Her garden, actually, was our source of inspiration.

After the first introductions were done and some invigorating pumpkin soup was eaten, a group of sixteen people joined Idun Leinaas, from Norwegian Biologisk-dynamisk Forening, on a tour of the garden—one of the largest and more interesting bio-dynamic ones in the country. People could see first hand what a large variety of vegetables can be grown and taste raw produce straight from the plants.

Questions were asked, tips were given and there was some exchange of recipes as we all headed back in the house to pickle beetroots in the traditional way. Everybody had brought a jar with them to take it home filled with their own pickled beets as a juicy reminder of the experience.

Meanwhile, Food Studio house-chef Magne Ilsaas and Jan & Tove Svartsund, Kjartan «the archeologist» Fønstelien were giving the final touches to a five-course dinner they had prepared mostly (literally) in the field, harvesting the garden’s produce.

When the guests made their way to the greenhouse, it was starting to get dark. There were candles and orange pumpkins along the way serving not only as fantastic decorations, they also created a glowing path through the field.

Candles illuminated the table as well and Food Studio provided everybody with traditional Norwegian sweaters: a colourful way to get in the mood and keep warm. At this point waiters and waitresses, coordinated by an ever present “butler”, began to bring in the food, while chef Magne used a small head-torch to come and go from his open-air kitchen so he could briefly introduce each of the courses.

As night fell, the atmosphere grew particularly cozy and the conversations grew merrier and merrier as food and drinks were brought to the table. Bøgedal beers from Denmark and rhubarb juice were paired with an interesting wine list put together by sommelier Torstein Hiorth Østenstad from Moestue, who had picked some delightful French gems.

Savoury pickled mussels opened the meal, chased with pumpkin gnocchi, followed by the day’s fish  (fiskerboller based on three different fish) and a succulent goose – everything prepared using local, seasonal ingredients. The dessert featured autumn apples, oatmeal and cream served soft and sweet, with just a pleasant hint of smoke.

Around 23.00, staff from Tim Wendelboe brewed coffee for everyone, served with a brief introduction by Tim Varney, roaster and general manager there. The coffee was grown by a co-operative called Michiti in Western Ethiopia and was prepared using the traditional Nordic method of kokekaffe—fueling the continuing conversations with Norwegian’s most beloved drink.

Those who turned around for one last glimpse of the greenhouse as they left, may have felt halfway between a Harry Potter scene and some postcard landscape.

Change guests and hit the “repeat” button twice: you will get an Åkermiddag to be proud of.

Thanks to all of the fantastic people who made this evening come true:
Linda Jolly for opening her home and letting us serve food from her beautiful edible garden, Idun Leinaas and theBiodynamic Association for sharing their knowledge, Magne Ilsaas, Jan & Tove Svartsund, Kjartan Fønstelien for hunting, foresting and having so much fun working day and night in the field serving us a dinner as tasty and local as it possible can be. Torstein Hiorth Østenstad from Moestue for perfect pairings of biodynamic wines, cider from Eric Bordelet and beer from Bøgedahl. Tim Wendelboe and the coffee team of Tim Varney, Brian W. Jones and Håkon Kinn for finishing the dinner with amazing coffee brewed the old fashioned way, fitting the surroundings with “kokekaffe”. From the Food Studio team Therese Vågane contributed with her scenography lifting the scenery to an beautiful memory, Anne Maurseth charmed us all with her lovely presence in her debut as the butler, Renate Fughlseth for being the sweetest and helping out in every possible way. Freetex for contributing with the traditional Norwegian jumpers called “lusekofter”. Ida Noemi for letting us use her table lantern Fyr. Hobbydrivhus.no for delivering the greenhouse and Dag Tjersland for letting us use his genius outdoor kitchen. Also a huge thanks to all the volunteers who contributed, without them it wouldn’t be possible to create such an unique evening. 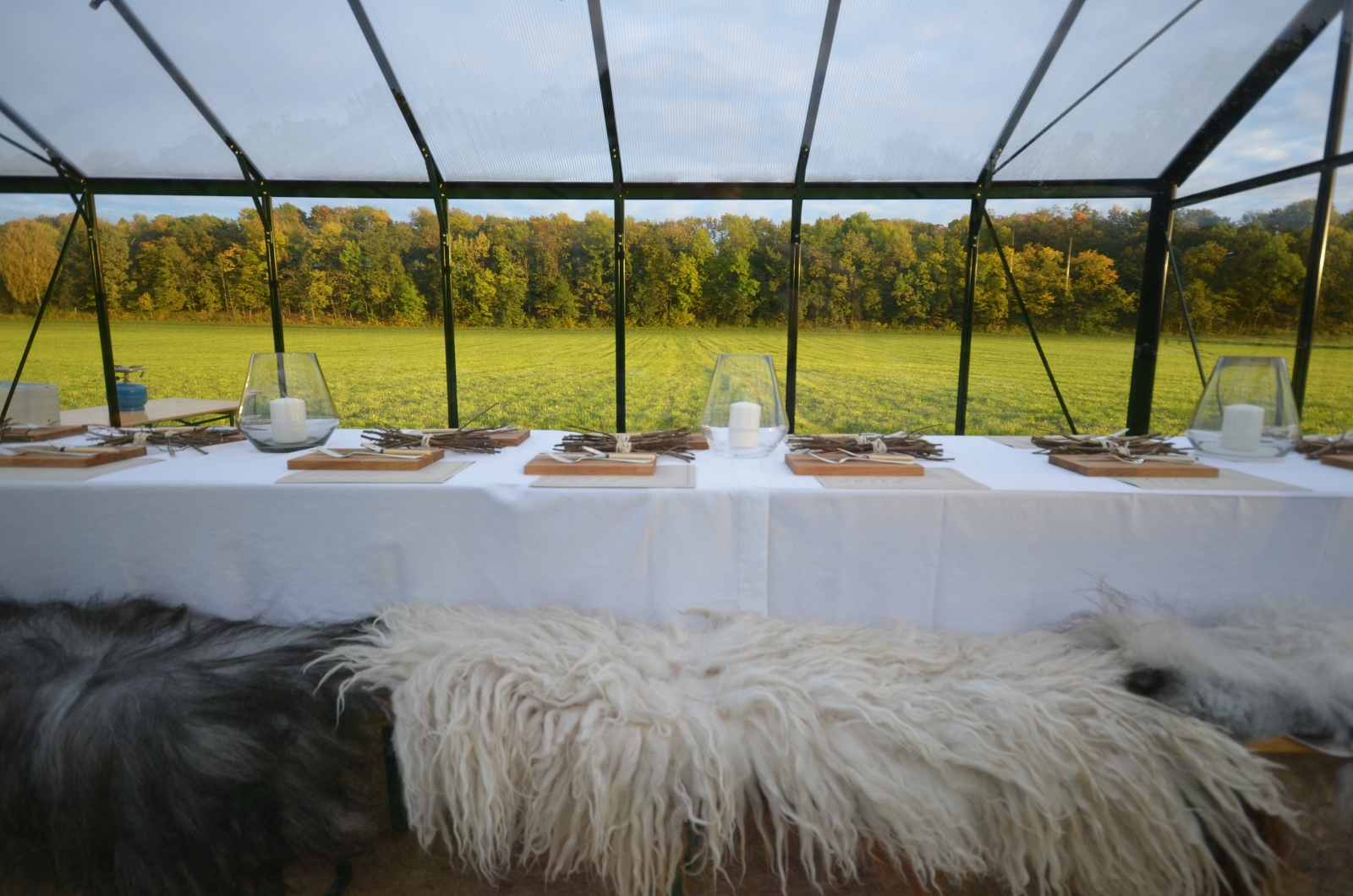 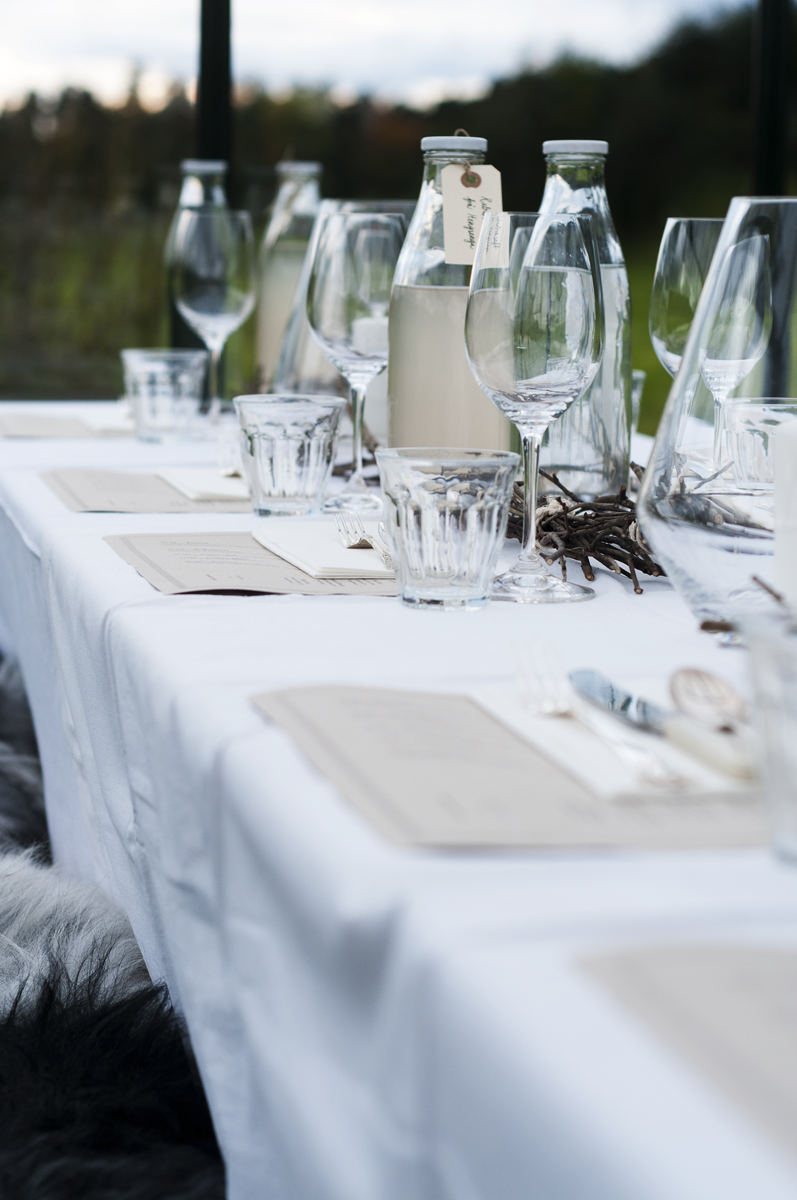 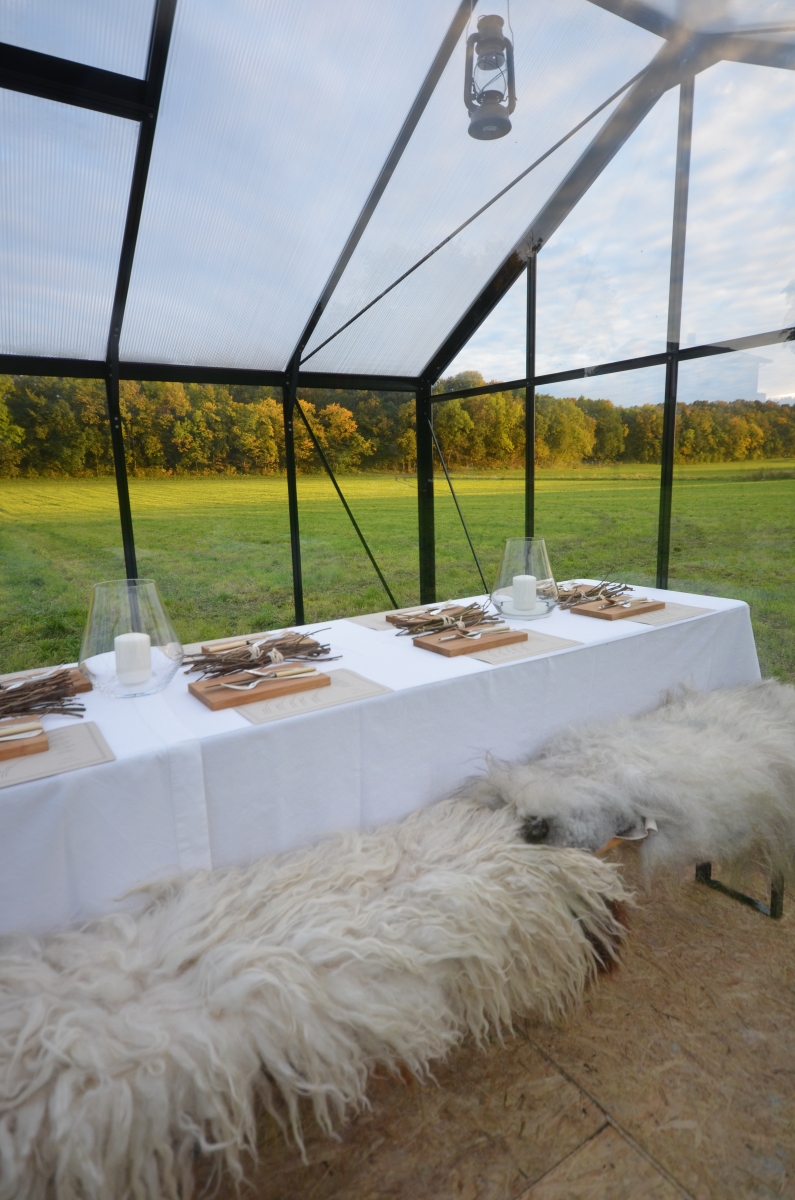 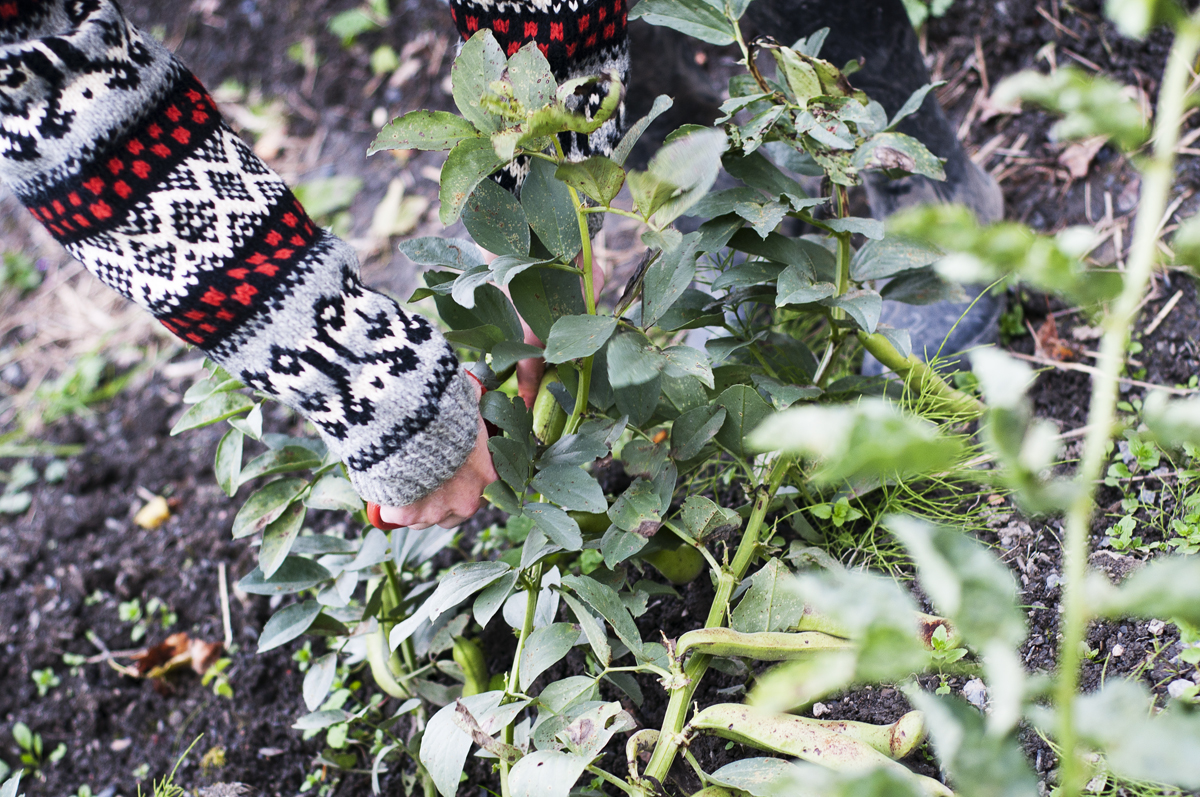 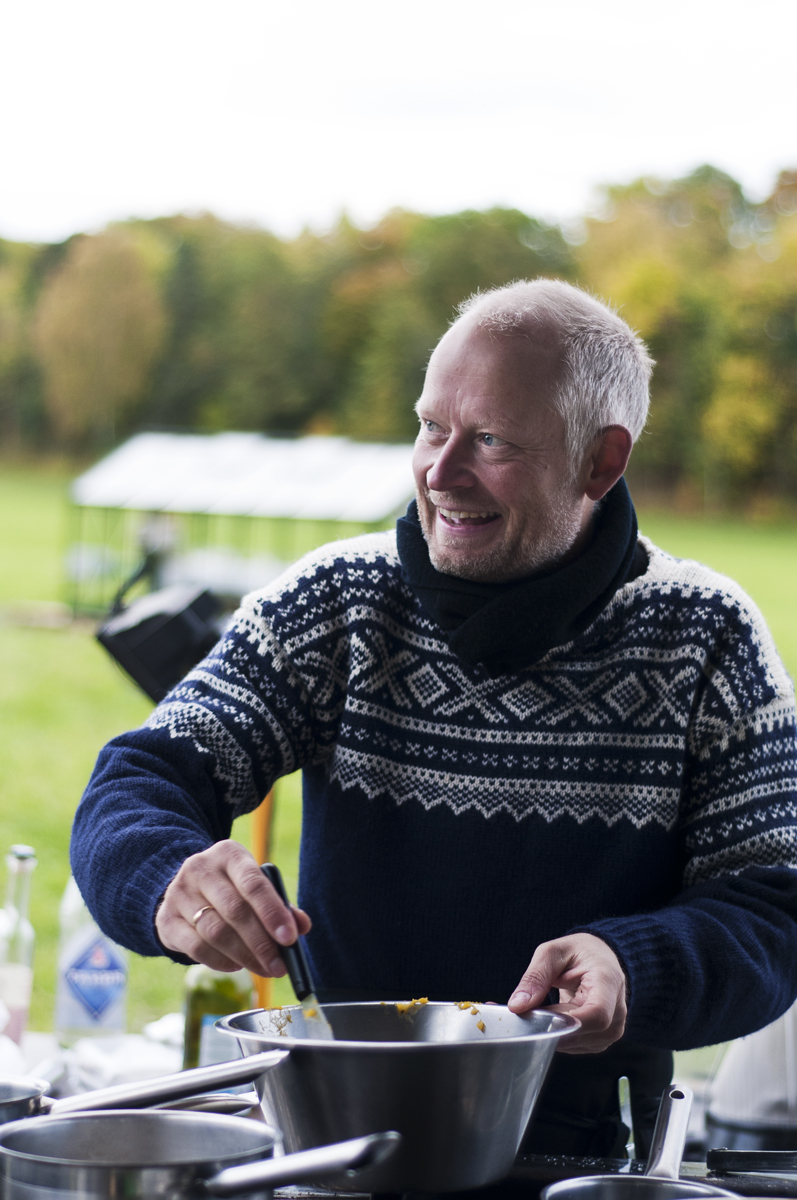 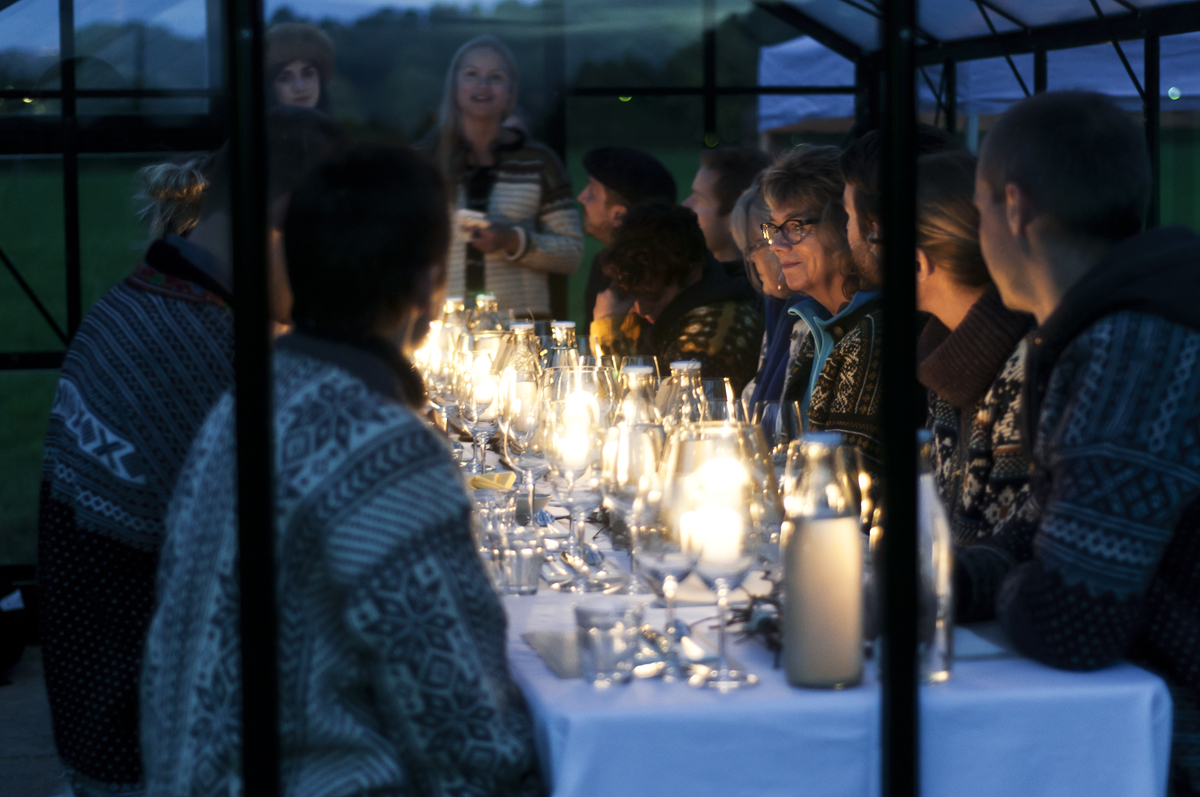 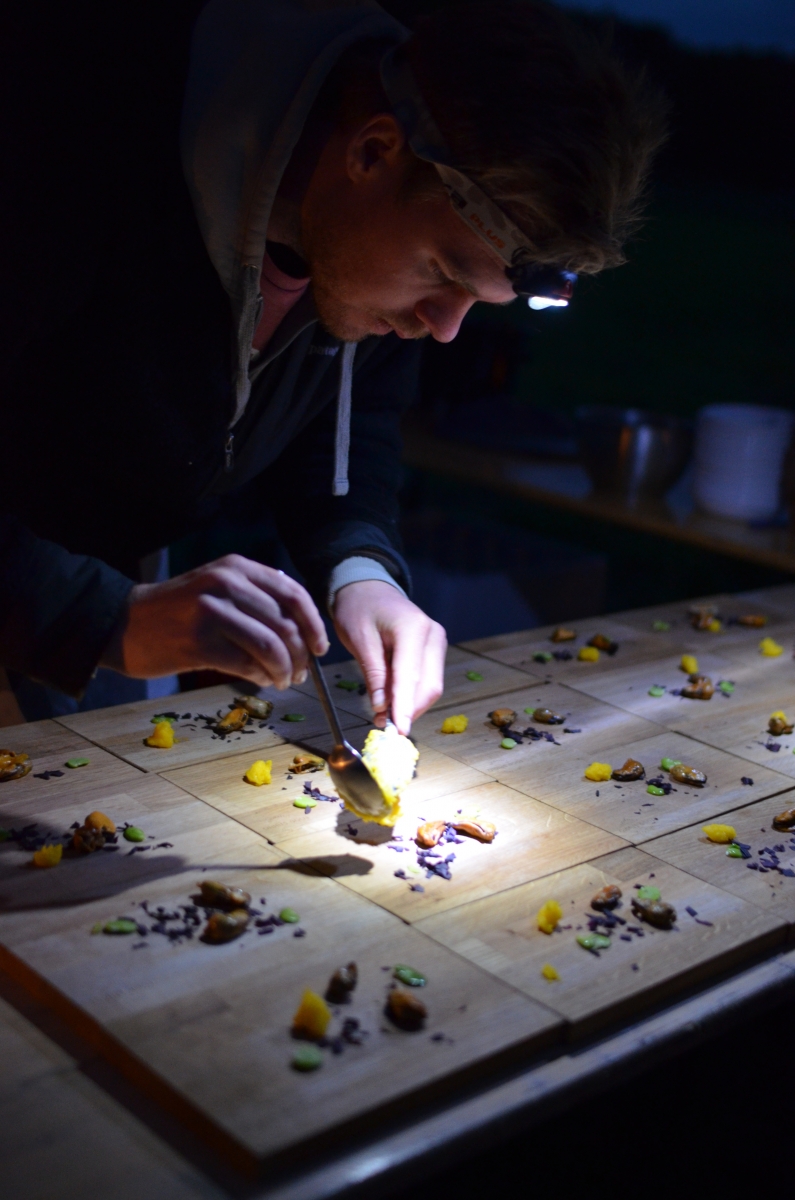 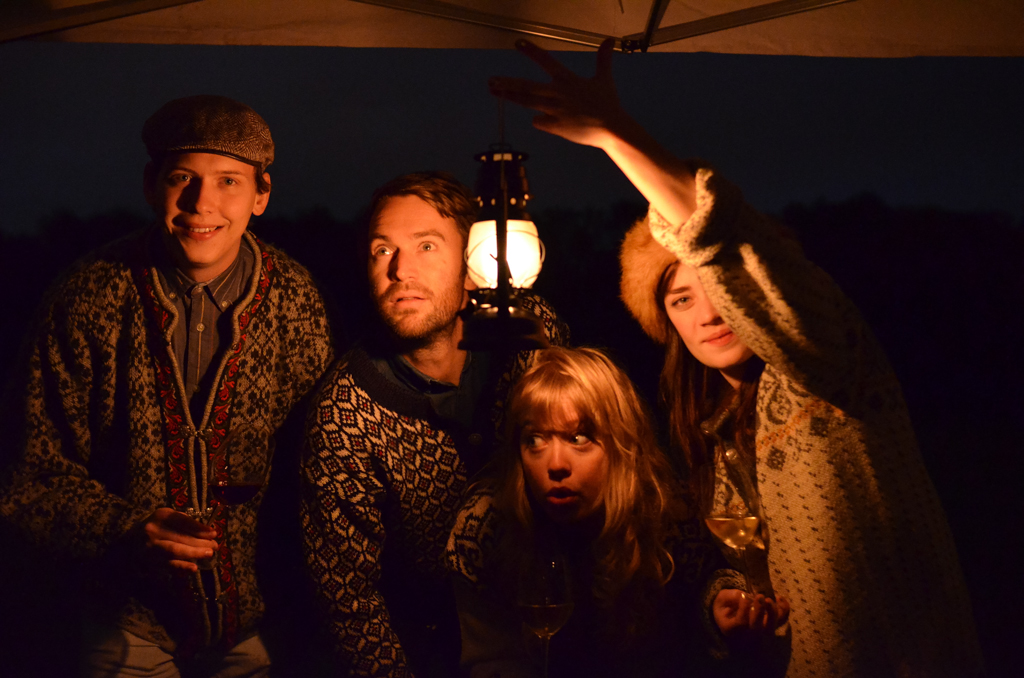 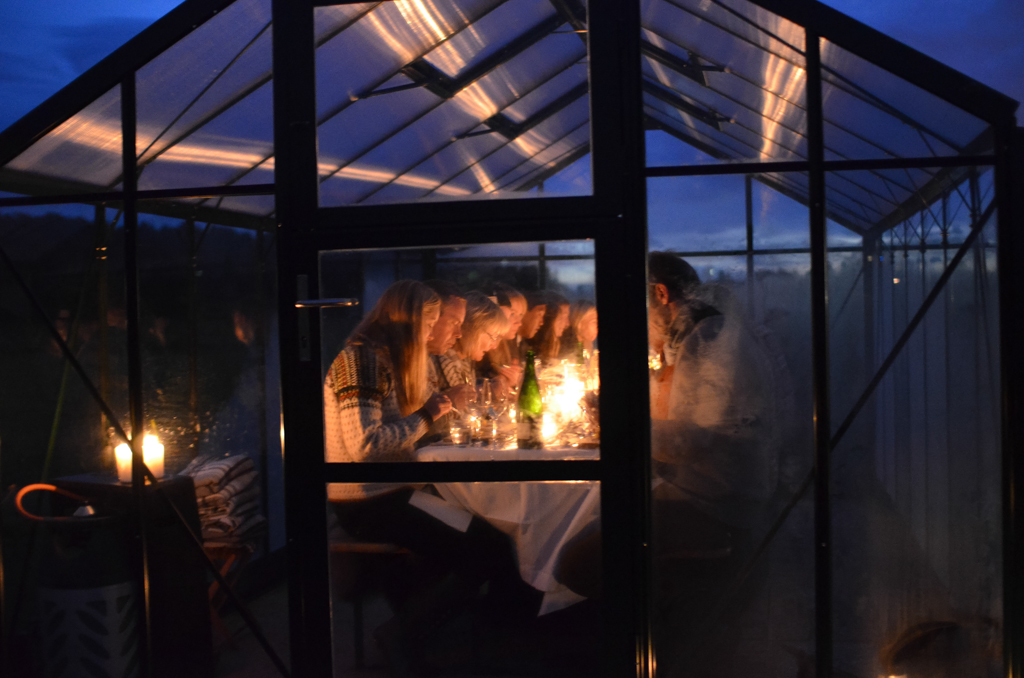 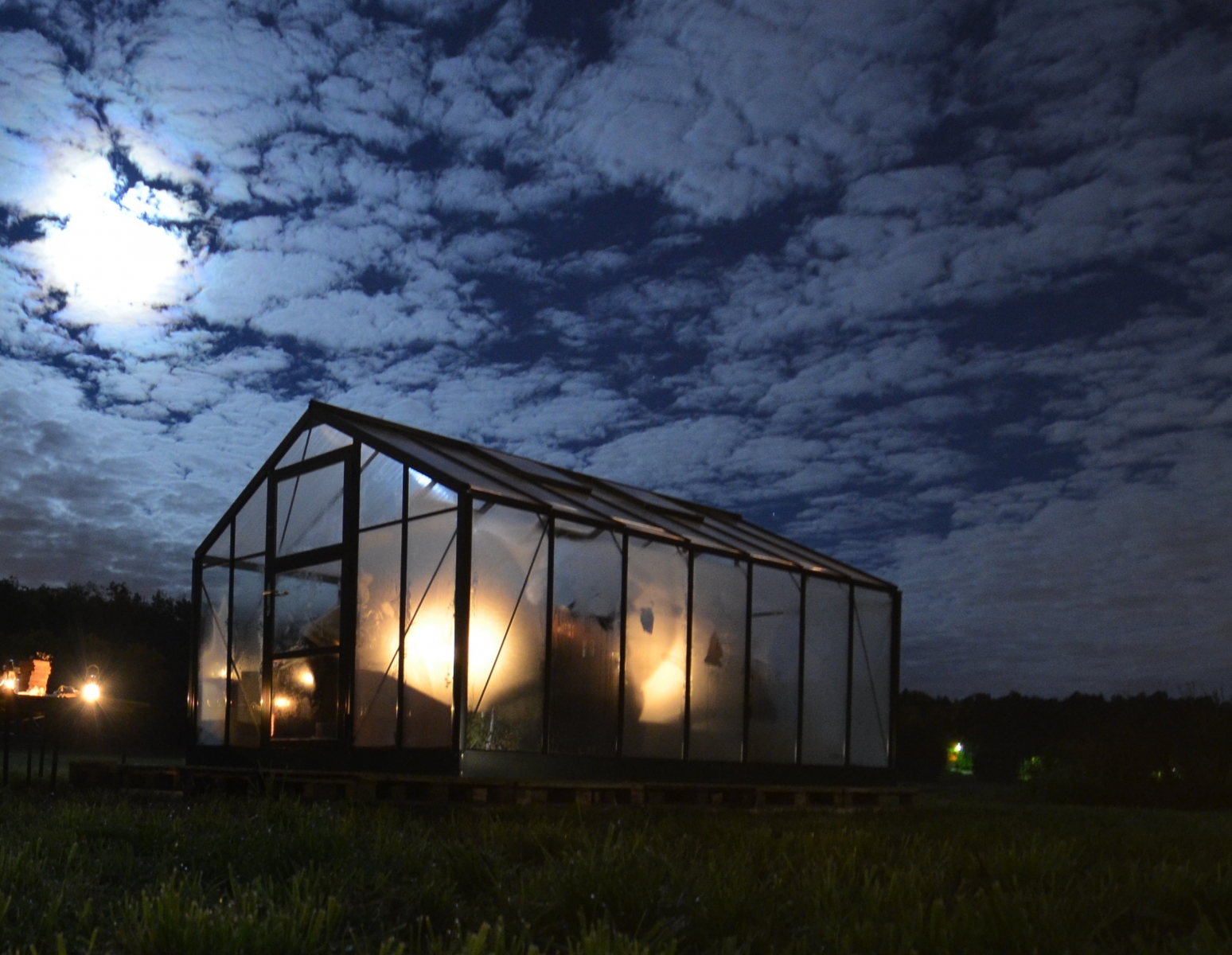